In the 116thCongress, we welcome three new Presbyterians to Capitol Hill, for a total of 26 Presbyterian Members of Congress. There are 13 in each chamber. They are both Republicans and Democrats. 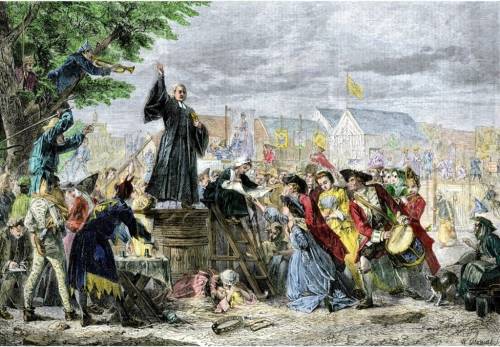 Presbyterian ministers were some of the first to make public statements supporting the American Revolution. The Anglican Bishop Charles Inglis wrote:

“I have it from good authority that the Presbyterian ministers… passed a resolve to support the Continental Congress in all their measure. This, and this only, can account for the uniformity of their conduct, for I do not know one of them… who did not by preaching and every effort in their power promote all the measures of the [Continental] Congress.”

Indeed, these ministers served as a counterpoint to the Anglican bishops who advocated for allegiance to the king. John Witherspoon, a Presbyterian minister and professor of theology at Princeton, was one of a very few ordained clergymen to sign the Declaration of Independence.

The Revolutionary War, which King George himself called “a Presbyterian Rebellion”, turned out to be only the start of political activism for Presbyterians. Presbyterian lobbying efforts helped to codify the separation of church and state in state constitutions, most notably in Virginia. The efforts did not end at the state level; eleven of the 55 delegates at the Constitutional Convention were Presbyterian.

Clearly, American Presbyterians have never been afraid to stand in conflict with power that they perceived to be unjust. Indeed, they have been rather effective in that practice.

We hope that the 26 Presbyterians currently serving in Congress will continue the tradition of influencing U.S. politics and policies with conscience and good faith. We welcome them to stand with the PC(USA) on ongoing matters of social justice and human rights. Presbyterian political practices have evolved much in the last three centuries, as the church itself is Reformed and always reforming. However, the tradition of American Presbyterians speaking truth to power has its roots in the very foundation of the United States.