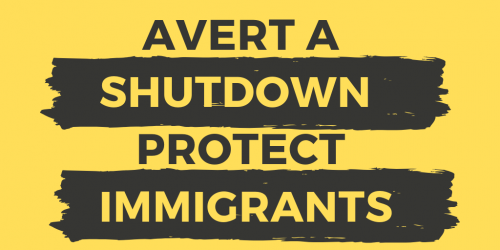 After the longest shutdown in government history, Congress has until February 15, to figure out how to fund the Department of Homeland Security (DHS). Without a lasting agreement to keep the government funded, departments funded by the remaining seven spending bills will shut down again, while other critical programs continue to linger under threat from the President’s demand for more than $5 billion for a border wall that simply cannot pass Congress.

It is critically important that Congress work together to avert another government shutdown while protecting the rights and dignity of migrants, border residents, and vulnerable communities across the nation.

Click here to send an email to your members of Congress.

We need people of faith to urge their members of Congress to pursue a long-term solution without further militarizing our border or shutting down the government.Additional funding for Immigration & Customs Enforcement (ICE) and Customs & Border Protection (CBP) will worsen our punitive immigration system and put more people in harm’s way. Instead, Congress should invest in alternatives to detention, such as community-based case management, and more humane policies and practices along the border. Further, ICE and CBP should be prohibited from overspending appropriations or repurposing other agencies’ funding for detention, border wall construction, or expanded immigration enforcement.

Who are the key decision makers?

There is a group of legislators tasked with coming up with a compromise piece of legislation for Department of Homeland Security spending. If you are represented by the people below, your voice is especially important. However, it is important for you to reach out to your members of Congress no matter where you live, so that they can weigh in with their colleagues on what they are hearing from their own constituents (you).

The conference committee legislators are:

What should you say to your legislators?

Your legislators should hear from you that you want them to significantly reduce money for deportation, detention, and border militarization and walls. 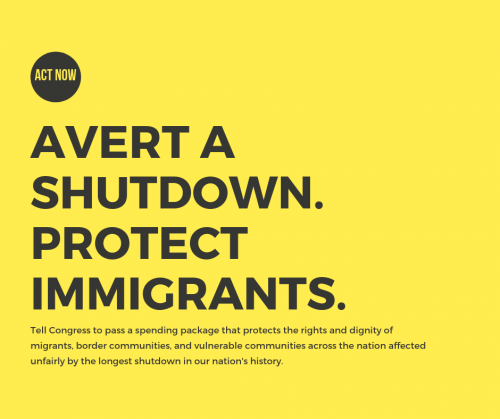 As a person of faith, I urge Congress to negotiate and pass a spending package that protects the rights and dignity of migrants, border communities, and vulnerable communities across the nation affected unfairly by the longest shutdown in our nation’s history.

I believe that Congress should be focused on significantly reducing funding for deportation, detention, and border militarization and walls. Our tax dollars should be spent alleviating poverty and investing in our future – not rounding up our neighbors or locking out people seeking asylum.

Any new DHS funds must not further militarize the border, but rather invest in alternatives to detention and other community-based solutions. Further, ICE and CBP should be prohibited from overspending appropriations or repurposing other agencies’ funding for detention, border wall construction, or expanded immigration enforcement.

I urge you to work with your colleagues across the aisle to restore good governance and reject the President’s harmful immigration enforcement demands under threat of another shutdown.