Now after [the wise men] had left, an angel of the Lord appeared to Joseph in a dream and said, ‘Get up, take the child and his mother, and flee to Egypt, and remain there until I tell you; for Herod is about to search for the child, to destroy him.’ Then Joseph got up, took the child and his mother by night, and went to Egypt. – Matthew 2:13-14

Mary and Joseph knew what it was to flee from violence, in fear for the life of their child. They knew that if they stayed where they were, Herod would find Jesus and would kill him in his manger. Maria Nino knew the same fear when she and her three children fled violence in Honduras in search of safety and asylum in the United States.

The “slaughter of the innocents,” as it is known, is one of the darker elements of the Christmas story. The dark elements bookend the story. The holy couple first encounters rejection at the inn and the offer of a stable. Then the joy bursts forth—the baby is born! The shepherds have come to adore him and the wise men have bring him gifts. Joy to the World! And this is where we usually stop reading the Christmas story.

But Mary and Joseph’s flight to Egypt is what takes place in the darkness after all the visitors have left. It’s the fear that comes when they startle awake in the night—what woke them? It is urgent, directly from God’s own messenger. “Flee,” the Messenger tells Joseph. “The child is in danger.” And so, a young weary family runs away to a foreign land in search of safety, sanctuary and asylum. 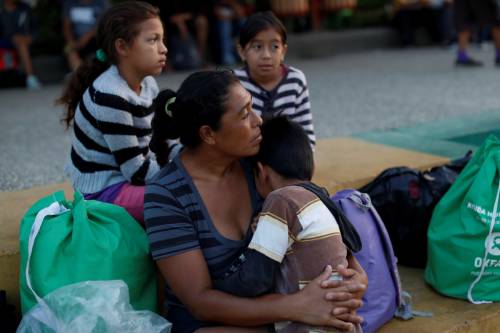 Maria Nino, migrant from Honduras and part of a caravan trying to reach the U.S., holds her son Marvin after they spent the night in a public square, in Tecun Uman, Guatemala October 26, 2018. REUTERS/Carlos Garcia Rawlins

Maria Nino, who left Honduras to find safety for herself and her children, is part of the so-called migrant caravan, the group of people who are travelling thousands of miles in search of safety and asylum.

Will we let them in? Will we offer the same shelter sought by the Holy Family—Mary, Joseph, and little baby Jesus?

Right now, we are sending more soldiers to the border instead of offering safe haven. We are refusing to allow people who need shelter to enter the United States. We are deliberately slowing down the processing system, so that many fewer people than we can handle are allowed to enter and formally seek asylum. When we do let them in, we detain them indefinitely in prisons euphemistically called detention centers.

The staff from the PC(USA) Office of Immigration Issues recently visited the U.S.-Mexico border. Amanda Craft reported on her walking trip across the Santa Fe Bridge between El Paso, TX, and Ciudad Juarez, Mexico.

“It is the United States that is creating the crisis at the border crossing between El Paso, TX, and Ciudad Juarez. Asylum seekers wait patiently on the bridge, waiting their turn to be allowed in the United States to ask for protection. The chaos is also affecting life in this bi-national metropolis. People in these two cities have lived between and across the border for generations. However, now this crisis is interrupting that way of life, and we witnessed volunteer fatigue as communities strive to meet the needs of new comers in their cities.

Indeed, rather than offering the radical hospitality that Jesus calls us to offer in Matthew 25, we are closing the borders to the Holy Family and sending troops to make it very clear that they are not welcome here.

In this season of Advent, as we prepare and wait for the birth of the Christ child, what will we do when he gets here?

Jesus is at the border right now. Will we allow fear and hateful rhetoric to keep him out?

*The Washington Report to Presbyterians, Winter 2018 edition, was published in December 2018.