If you’re reading this digitally, you are probably doing so on a machine that contains minerals from the DRC.

The Democratic Republic of the Congo (DRC) has vast reserves of mineral wealth. The Congo is home to 80 percent of the world’s coltan reserves, which is used in smartphones, tablets, computers, and other electronic devices. The DRC also produces gold, cobalt, copper, diamonds, and many other highly valuable resources. In fact, the DRC is such a rich country that it suffers from a resource curse. The country is so rich in minerals that it became a place of extreme conflict, with many parties vying for control of the area.

Since gaining its independence in 1960, the DRC’s political history has been conflict-ridden and tumultuous. The most recent war began in the 1990s and included most countries in Central Africa. While the war officially ended in 2003, violence has continued in many parts the country. And with war comes poverty. 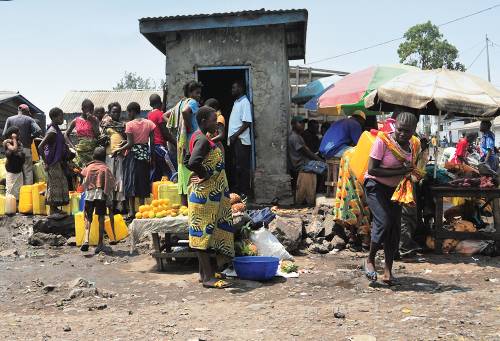 War brings poverty in a number of ways. If people cannot tend their crops because they have to move or militia groups have damaged their fields, people go hungry. Militia groups frequently burn schools leaving children without access to education, a key root of poverty. Additionally, militia groups make travel across a country, which only has 200 miles of paved roads, even more difficult by setting up blockades and preventing passage. In addition to these disruptions, the DRC is currently home to a massive Ebola outbreak and the state of violence impedes Congolese government and World Health Organization’s efforts to combat the Ebola outbreak. Over five million people have died from fighting, disease, and poverty as a result of the warfare.

Why has the violence gotten worse lately? The answer is largely political. DRC president Joseph Kabila took office in 2001, following the assassination of his father, Laurent-Désiré Kabila. He subsequently won his 2006 re-election, which was boycotted by the main opposition party, and again in 2010, when local and international observers considered the election seriously flawed. An election scheduled for November 2016, was postponed indefinitely, citing a lack of funds. It thus became clear that Kabila had no intention to leave office in this Democratic nation. This situation created a constitutional crisis.

Now, elections have been scheduled for December 23, 2018, providing an important opportunity to test the people’s political will and begin to rebuild confidence in national democratic institutions. The United States has a responsibility as a member of a community of nations to help the Congolese people regain confidence in their country and see the DRC’s first peaceful transition of power. U.S. assistance can help the Congolese people to reclaim a culture of democratic participation through free, fair and credible elections.

In 2016, the United States provided about $340 million in assistance to the DRC through various USAID initiatives. It will be important to maintain and expand assistance in key areas, particularly with respect to building democratic institutions and addressing developmental and humanitarian challenges exacerbated by corruption, conflict, natural disaster and other factors.

The Congolese people deserve peace and a democratically-elected leader. We must work to ensure that happens.

*Update on Dec. 23 elections as of January 4, 2019: The election was pushed back a week (which was generally a good because they were not ready on the 23rd). The election took place on Dec. 30, 2018. Ballots are still being counted. The result has not yet been declared yet.