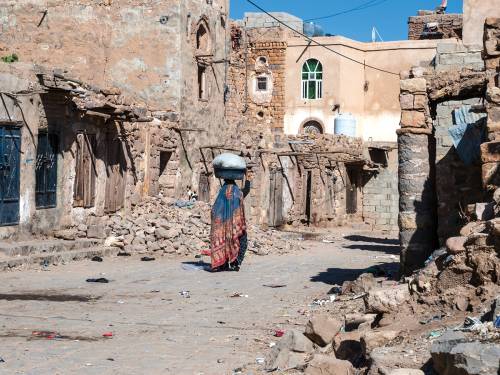 Yemenis are unable to access the food and health services they need to survive. A diagnosis of cancer is a death sentence. More than half of Yemen’s health care facilities have been destroyed and the Saudi-led coalition is restricting access to ports. All sides have restricted humanitarian organizations from providing lifesaving medicine and clean water, exacerbating the growing cholera epidemic, which has taken over 2,300 lives in the past year.

The United States is the largest arms supplier to Saudi Arabia, with $8.4 billion worth of sales since 2014. Even though Congress never authorized U.S. involvement in the war in Yemen, by continuing to give military support to the Saudi-led coalition, the United States and we, as its citizens, are complicit in the unnecessary suffering of the Yemeni people.

The PC(USA) General Assembly (2018) passed a resolution acknowledging, “the U.S. role in the war in Yemen, and by extension, our own complicity through our taxes that fund the U.S. military’s role in the conflict… and the devastating effects of the war in Yemen such as:

Further, the Assembly called for an immediate halt to the sale of weapons to Saudi Arabia as well as logistic support including intelligence for selecting targets and air-to-air refueling of Saudi jets.

S.J.Res. 54, the Sanders-Lee-Murphy legislation,would end illegal U.S. participation in the war in Yemen. Please contact your Senators today and ask them to co-sponsor the legislation and to press for its passage.*

*Update as of January 4, 2019– In mid-December the Senate voted to end U.S. military support for Saudi Arabia’s war in Yemen. The Senate utilized powers granted under the 1973 War Powers Act, which gives Congress the power to demand an end to military actions. The bipartisan vote is a major rebuke to Saudi Arabia, long a key U.S. ally.

In the House of Representatives, Speaker Paul Ryan attached a rule to the Farm Bill forbidding any vote to end U.S. military support for the Saudi war in Yemen before the end of 2018. Members of the House in 2019, are already planning hearings on the Saudi-led war in Yemen and are pressing for an early vote in January on legislation to withdraw U.S. support for the war.  Please continue to contact your members of Congress!