By Jamila Cervantes, Emerson National Hunger Fellow with the Office of Public Witness 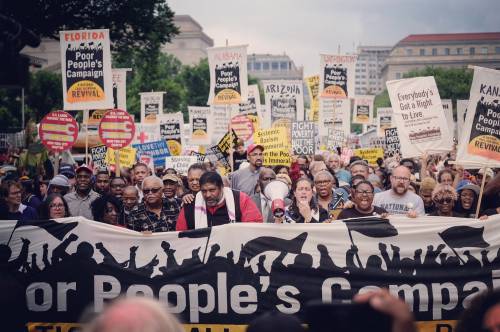 From behind the bars of the Birmingham Jail, Rev. Dr. Martin Luther King Jr. wrote, “I am cognizant of the interrelatedness of all communities and states. […] We are caught in an inescapable network of mutuality, tied in a single garment of destiny. Whatever affects one directly affects all indirectly.” While working as a social media manager for the six-week launchof the Poor People’s Campaign, I learned to curate content, draft media posts, and interpret analytics; but the most valuable lesson I learned was best summarized by Dr. King: there are threads that connect all people.

This very rhetoric is the foundation of the Poor People’s Campaign. The Campaign is intended to be a multi-year movement that marries elements of organizing, advocacy, and liberation theology education to address poverty and its root causes. The Campaign also attempts to dismantle the distorted narrative driving American morals that perpetuates the idea that individuals experiencing poverty should be blamed for their living conditions and at its core is the idea that all people deserve a dignified life. 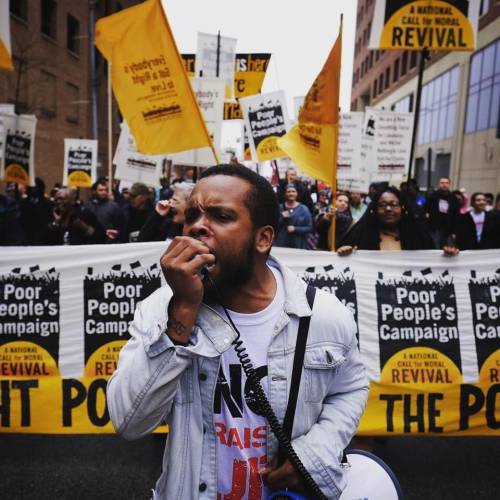 The Campaign operates at a state and national level. Participants are encouraged to mobilize with their state chapters around state-specific issues. The national co-chair team ensures that the campaign is cohesive across state lines and that the Poor People’s Campaign calls for accountability from the Federal government when it is strategic and fruitful.  Co-Chairs and faith leaders, Rev. Liz Theoharis and Rev. William Barber lead the Campaign’s national efforts.

The initial six-week launch of the Campaign—which I worked on—was modeled after Dr. King’s vision for the Poor People’s Campaign of 1986, but replaced the encampment aspect of the movement with other activities. The six-week launch began May 13th and culminated in a Global Day of Solidarity on Saturday, June 23rd. Every Sunday beginning May 13th, the campaign hosted a worship service to orient participants. Attendees were reminded of the reasons all should participate in the week’s upcoming actions. Every Monday following Sunday service, people gathered in the capitals of 32 participating states across the nation to demand their legislators to support sound policy around healthcare, ecological devastation, the war economy, and institutional racism. On Tuesday, the campaign organizers hosted a teach-in with the intention of disseminating qualitative and quantitative truths about the issues of the Campaign. It was common to hear from field experts and people directly impacted. Finally, all participants were welcomed to attend or watch an art and culture session on Thursday. Raye Zaragoza, Taina Asili, and Courtney Dowe were some of the many artists to perform during the course of the launch.

The six-week takeoff has resulted in attention from media, legislators, and the public at the national level. The constant agitation of people engaging in direct action at their state capitals led to attention from legislators. For instance, Representatives Attica Scott and George Brown Jr. of Kentucky wrote letters to Kentucky Attorney General, Andy Beshear and State Police Commissioner, Rick Sanders in support of the state chapter’s right to assemble after participants were denied entry to the Capitol building. Furthermore, Campaign leaders organized multiple politically focused events, including a hearing with Senator Elizabeth Warren and Representative Elijah Cummings to recount testimonies relating to issues of oppression and state violence. The Campaign has also been captured widely by local publications such as the Indy Star to major media outlets such as the Los Angeles Times. The wide breadth and scope of media attention is indicative of the popularity of the Campaign in the public consciousness.

The six-week launch of the Poor People’s Campaign also dramatized poverty in a way that was undeniable to spectators. For example, during a mass action, participants carried the casket of Michael Danforth who, as stated by his mother, Leslie Boyd, died from lack of affordable health care. Danforth was diagnosed with colon cancer but could not afford treatment because he was uninsured. Boyd explained that in North Carolina, state lawmakers blocked the expansion of Medicaid. Therefore, her son who had been born with a pre-existing medical condition did not qualify for affordable health care. His casket represented the hundreds of thousands of people who die from lack of affordable and adequate health care in every year in the United States. For many spectators, it was heartbreaking to watch Capitol Police demand that the casket be removed from the Capitol Hill lawn. Such actions and demonstrations made poverty undeniably visible.

The launch also led to a greater sense of empathy from participants and has garnered a desire to “do more.” I witnessed participants question the ethics of legality when nine faith leaders—including the Director of the Presbyterian Church (U.S.A.), Office of Public Witness, Rev. Dr. Jimmie Hawkins—were arrested while praying on the steps of the Supreme Court after the justices upheld a law that would purge voter from rolls. Participants began to understand some of the skepticism around conflating laws with morality. Many people also approached me to share their excitement about assembling across class, race, and party lines to demand sound policy during a time where political will was stifled by partisanship.

People’s excitement to show up for one another confirmed the many intersecting avenues for solidarity for me. Growing up in the bustling streets of Southeast Los Angeles, in a community where nearly 98% of the residents identify as Latin American, I felt I had nothing in common with anyone else who wasn’t living my exact same life. I don’t think I struggled with an intense case of narcissism; but rather that I was struggling to understand the way oppression operated in a country largely and mistakenly invested in the idea of individualism. I lived the majority of my life without healthcare and access to clean drinking water. I’ve lived my entire life in fear of unemployment and my community bears the brunt of environmental racism. But many people share my reality. Catherine Flowers, a rural development activist from Alabama said during a Campaign rally, “Marginalized people are suffering first and worst, whether they are white people in Appalachia, indigenous people at Standing Rock, or people in Puerto Rico.” People are bounding, if by nothing else, their oppression.

The two other lessons I learned were secondary, but important nonetheless. I learned that movements before us have laid out a lot of the groundwork for contemporary movements. The Poor People’s Campaign of 1968 demanded changes in policy to improve working and living conditions. Bayard Rustin drafted an “Economic Bill of Rights,” which amongst other policies, demanded that the Federal government recommit to the Full Employment Act of 1946, adopt the Housing and Urban Development Act of 1968, and repeal the punitive restrictions of welfare instated via the 1967 Social Security Act. The historical figures in our life have left us a legacy of social justice to build upon, but we must learn our own history to know and understand that. Another major observation is that the brilliance in movements doesn’t always happen from the stage. For the Campaign, it also happened behind the scenes and during less extravagant operations. I was honored to work with Shailly Barnes, who assured that all major productions operated smoothly. I also had the pleasure of working beside Rev. Dr. Erica Williams–who never failed to make nonviolent, direct action training material digestible and exciting, and Rev. Jazmine Brooks who facilitated difficult conversations with ease and a sense of effortlessness. Though there is elation associated with having the limelight, the leadership of these women of color and their dedication to the movement reminded me that movements rely on all working parts and they are equally as important than the performances that garner attention.

My vision of possibility for the Campaign is simple. First, I hope that the Campaign continues to mobilize around voter registration, education, and protection in light of the upcoming election. Second, I want to see a greater involvement of people affected. I want the Campaign to continue inviting all people affected by poverty into organizing spaces and created a cross-generational, cross-racial, and cross-class movement. The movement should make itself open to people of all ages, abilities, and identities by carefully crafting the organizing space into one welcoming to all. For instance, the Campaign should continue to hire ASL translators and additionally, should seek to meet other necessary expectations. I hope the Campaign forges partnerships with organizations and groups that have been championing social policy for years, such as BYP100 and Black Lives Matter local chapters. I would like to see the campaign expend energy on creating leadership-training opportunities. The legacy of movements should be a living one: movement leaders should actively seek to train others and prepare them to continue fighting for a just and righteous world until it is achieved. Finally, I want the campaign to win—for me, for you, and for all of us. We usually ended actions with a chant by Assata Shakur: “It is our duty to fight for our freedom. It is our duty to win. We must love each other and support each other. We have nothing to lose but our chains.” This call echoes the quote by Rev. Dr. King: we have a duty to fight for one another, because our destinies and lives are intertwined and related. I want this movement to fight to provide each and every single one of us the opportunity to live a healthy, prosperous, and dignified life and above anything else, I want us to win. 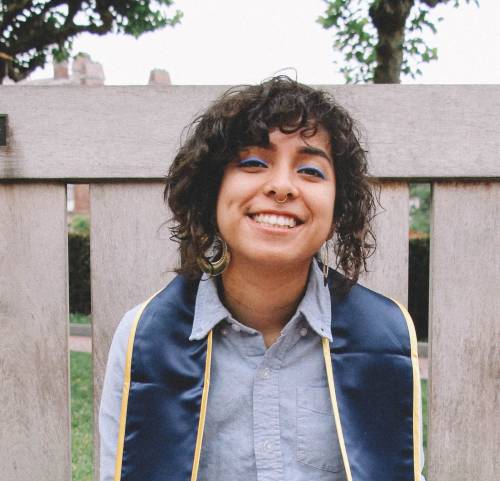 Jamila Cervantes was an Emerson National Hunger Fellow at the Presbyterian Church (U.S.A.) Office of Public Witness. For the first portion of their fellowship program, Jamila served as the Client Engagement Fellow at Oregon Food Bank in Portland, Oregon. They are a Gates Millennium Scholar and a recent graduate of the University of California, Berkeley with a combined degree in LGBTQ studies, Latin American studies, and Sociology. While at Berkeley, Jamila wrote their undergraduate thesis on the representations of queerness in Mexican film. Since graduating, Jamila has primarily focused their efforts on fighting hunger, poverty, and xenophobia.