Since the Trump administration terminated the Deferred Action for Childhood Arrivals (DACA) program in September 2017, more than 18,800 DACA recipients have seen their protections expire. As Congress considers proposals to protect dreamers, the White House and some Members of Congress have offered frameworks that would prevent family unification, deprive dreamers of an opportunity to pursue a pathway to citizenship, or increase the immigration detention, deportation, and border militarization machine. These proposals would prevent U.S. citizens from reuniting with their siblings, parents, keep greencard holders from reuniting with their adult children, and redefine family, invalidating our country’s claim to honor family values.

Here is a breakdown of the current proposals on the table: 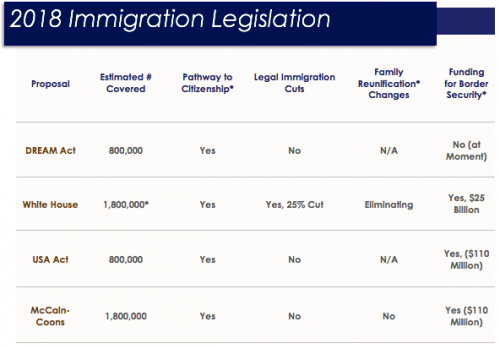 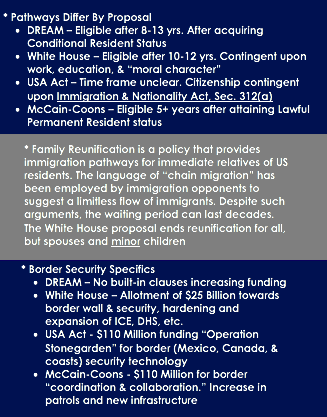 You’ll hear calls for a “narrow” immigration bill this week. A “narrow” bill focused on protecting undocumented youth. It’s our best shot at getting the votes we need for a #DreamActNow. There could be a vote in the Senate this week, and they will move very fast with amendments.

While we grieve for the families who have lost loved ones to violence at the hands of such gangs at MS13, it was disingenuous of the President to highlight the gang activity of MS13 as indicative of a broader trend of violence committed by immigrants. MS-13 is a gang that originated in Los Angeles in the 1980s and has since spread to Central America as a result of the U.S. mass deportation policies.

We as Christians must combat misrepresentations of policies that seek to re-unify families. The phrase “chain migration” is a pejorative word, used by anti-immigrant hardliners to give the false impression that we have completely uncontrolled family-based immigration occurring every year in the U.S. Depending on the country of origin, a sponsor’s immigration status and the applicant’s relationship to their sponsor, the waiting period can last from months to decades. In January 2018, for example, most immigrants sponsored by their United States-citizen siblings could begin to apply for a green card if their priority date was before June 22, 2004, a waiting period of 13.5 years.  Those from other “oversubscribed” countries like India, Mexico and the Philippines would have needed to have an even earlier priority date. We must continue to advocate for family reunification.

In a letter last Fall, Stated Clerk Rev. Dr. J Herbert Nelson II reflected on the mandate of the Church to accompany Dreamers:

“Our church is also a direct beneficiary of Dreamers. They are members in our churches. They offer their gifts to local, regional, and national bodies of the Presbyterian Church (U.S.A.). As I have served in many capacities for the denomination, I have preached to, counseled with, and prayed with people from many walks of life. Each one of them was nothing other than a child of God. These young people present a deeper reflection of the image of God. They bring additional elements of God’s love, grace, and mercy to our congregations.”