The Presbyterian Church (USA) has a long history of commitment to the establishment of “Faithful Budget” as it calls Presbyterians to the understanding that a budget does indeed reflect our values. We are committed to working with interfaith and ecumenical partners to advocate for budget priorities which protect the poor and vulnerable, rebuild communities devastated by violence and war, and provide a safe and nurturing place for the 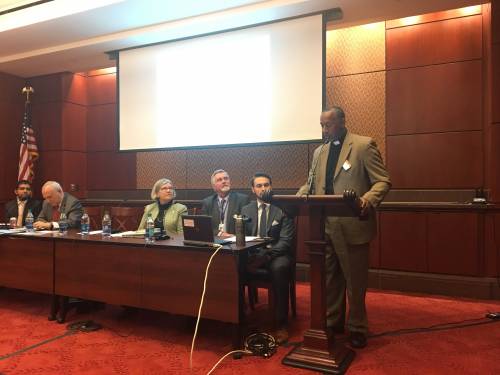 “The priorities we endorse as a nation reflect to some extent the priorities we sanction as individuals. The federal budget is a reflection of our own values. Ultimately, that which we prioritize, both personally and as a nation, directly reflect the extent to which we take the will of God, as revealed in the life, teachings, and sacrificial love of Jesus Christ, to heart.

Since 2012 the Presbyterian Church has issued a call for a “faithful budget” for the protection of the common good, a promotion of individual wellbeing and to lift the economic burden placed upon the poor.

Our Stated Clerk, The Rev. Dr.  J. Herbert Nelson, said: “In America, we have enough resources to feed everyone, house everyone, and educate everyone if our leaders have the political will to put the common good before tax breaks for big corporations and the super wealthy.”

The Rev. Bruce Reyes-Chow, a former moderator said that a budget sends “a message, in both tone and tactic, that our government is more concerned with protecting those who control wealth and privilege than supporting those upon whom that wealth and privilege has been built. As a person of faith, as a citizen of the United States, and as a human being, this is simply unacceptable.”

As people of faith, we promote a “Faithful Budget” in order to:

There are two fronts on which I wish to speak pertaining to the ways in which a Faithful Budget should demonstrate a strong environmental focus and internationally impact.

We are called to serve as mindful caretakers and protectors of Creation. To recognize the essential goodness of our natural environment and through proper stewardship of it protect the health and wellbeing of families and communities in the United States and around the world. It is a moral responsibility for our nation, and a sacred task 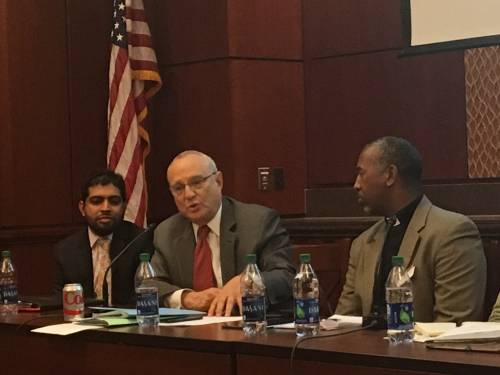 for people of faith to protect our ecosystems, to lessen climate change, to work for environmental justice, and advocate for a federal budget which reflects those goals.

The 1990 PC(USA) document entitled “A Call to Restore the Creation” stated that “In this critical time of transition to a new era, God’s new doing may be discerned as a call to earth-keeping… God calls the Presbyterian Church (U.S.A.) to ‘the love of neighbor, particularly “the least” of Christ’s brothers and sisters, (and) requires action to stop the poisoning, the erosion, the wastefulness that are causing suffering and death.”

The 202nd General Assembly (1990) called Presbyterians to the practice of “Earth-keeping… to wise, humble, responsible stewardship, after the model of servanthood that we have in Jesus.” and

Therefore, A Faithful Budget must safeguard God’s creation, address the impacts of climate change on our most vulnerable and at-risk brothers and sisters, fulfill our moral obligation to future generations locally and globally. It should provide sufficient resources to protect the life-sustaining gift of Creation and reflect a commitment to healing the brokenness between people and the rest of the created world. We must provide sufficient revenue to fund critical air and water quality testing programs, retrain workers for a green economy, and provide aid to those displaced by disasters.”

A Faithful Budget must fund the government’s ability to celebrate the goodness of creation, stand with impacted and marginalized communities, protect life-sustaining gifts of air and water, invest in a sustainable energy future, and prioritize research and science.

A Faithful Budget must ensure a reverence for all of Creation, make choices that protect our air, water, land, and all life forms. The shared good cannot be furnished to all citizens if our air and our water are poisoned

“President Donald Trump’s administration proposed a 31% cut to the EPA’s 2018 budget that would eliminate climate change programs and trim air and water quality initiatives and lead to the elimination of 5000 jobs.

Budget reductions are forcing closure of critical facilities. The EPA is consolidating research and testing laboratories to cut costs and plans to relocate or merge at least five labs, including one in Houston responsible for overseeing tests at 13 Superfund program toxic waste sites hit by Harvey flooding. These sites released cancer causing pollutants into neighborhoods primarily home to people of color and working-class people. The impacts of climate disaster are moral issues of racial and economic justice. It is a test of our priorities and our conscience as a nation as to whether we take steps to mitigate climate change and care for the most impacted.

Perhaps the most telling in the current budget priorities is the threat to eliminate the Office of Environmental Justice. With an annual budget of just $2 million dollars EPA administrators under Scott Pruitt plan to eliminate an office that is explicitly charged with rectifying disparate environmental impact by race.”

We must go in a different direction as a nation and promote full and adequate funding for:

Our faith traditions teach us that we have been entrusted by God to care for Creation on behalf of current and future generations. We live in a deeply interconnected world where the gifts of clear air, clean water, and natural spaces, must be protected because of their intrinsic worth. Just as we are called to heal and care for one another, so, too, are we called to help heal the Earth so that humankind and all of Creation may coexist.

Secondly, the budget will have international implications.

A Faithful Budget will respond with compassion and justice for our neighbors in need around the world. When asked, “Who is my neighbor,” Jesus response was unequivocal. Our neighbor is the person who needs us, whatever his nationality or faith tradition.

However, current budget proposals reduce spending on international aid. We urge Congress robustly fund this aid, and to reject any reductions.

Our faith traditions challenge us that our nation – the richest in the world – should increase its commitment to vulnerable, displaced and impoverished children, women and men around the world with no further reductions made.

The current administration has planned a path which is dangerous for the world and for this nation. With a 28% reduction in the budget for the State Department and a policy of utilizing hard power, military options, over soft power, diplomacy, it is setting the world on a course of increased conflict and war. We see the response by North Korea to increase nuclear weapons testing rather than to decrease. Career diplomats are leaving the State Department in record numbers which will decrease our ability to ease tensions between nations and negotiate a peaceful resolution to many of the world’s problems. Proposed cuts to USAID by 31% and to the Treasury International Programs by 31%, the results would be a world wherein the influence of the United States has little to no impact.

A November 29th CBS reported that the “ONE Campaign” released a report on the potential impact of the White House’s proposed $800 million cut to HIV/AIDS has experts predicting that it would result in millions of new HIV infections and hundreds of thousands of deaths, reversing progress the world has made in the fight against AIDS. The report entitled, “Red Ribbon or White Flag, The Future of the U.S. Global AIDS response stated that “The FY 2018 budget proposal would have led to the firs global increase in new HIV infections since 1995, with nearly 200,000 additional HIV infections in the first year.

A Faithful Budget is mindful of the fact that any investments we make overseas give a return here. If the world is safer, we are safer. If the world is healthier, it impacts our health results here. If we have a peaceful and healing presence wherever we trod around the world, we will have the respect of others who look to this country for leadership which is just and promotes human dignity.