At the COP 23, we are faced with two striking facts: first, that women comprise 80% of all climate refugees, and second that this burden is not borne equally around the world. On average, one woman in the Global North consumes 400 times the resources of a woman on the continent of Africa, and is far less likely to face devastating impacts of climate change in the short term. Women’s Earth and Climate Network convened a panel of women from the Global South and the South in the US to discuss the need to listen to solutions women already have to the climate crisis. 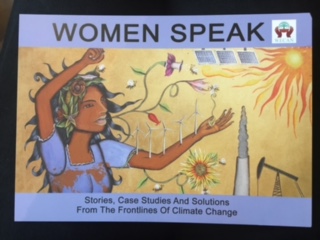 I was impacted by the work of Patricia Gualinga, a Kichwa leader from the Pueblo of Sarayak in Ecuador. She and others have developed a new legal framework for a “living forest” which offers a category of legal protection for the habitat. This was in response to the fact that outsiders kept defining development for the village, and their definitions were often accompanied by land grabs and proposals for extraction projects in Ms. Gualinga’s home in the Amazon. The Pueblo of Sarayak has now defined “development” as “fresh air, clean water, fertile soil, and living in community.” The category of legal protection they are proposing for their home would take into account that the Amazon is part of their community, and would ban industrial extraction on their lands.

Ruth Nyambura, with the African Eco-Feminists Collective in Kenya, expanded on some of these ideas 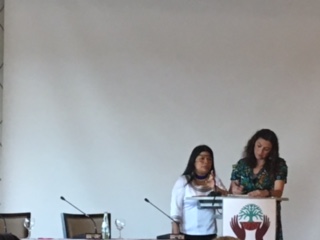 by challenging who we consider experts. She said “What does parts per million mean? Women who are farmers, who are fisher folk, women know.” She called feminists around the world to attend to the fact that transnational corporations can move across borders with ease, but people cannot.

Finally, we got to hear from Monica Atkins of Cooperation Jackson, the mission of which is to advance the development of economic democracy in Jackson, Mississippi by building a solidarity economy anchored by a network of cooperatives and other types of worker-owned and democratically self-managed enterprises. Ms. Atkins explained that Jackson has plans to become a zero emissions city by 2025, which is a goal far more ambitious than any agreed upon in the Paris Climate Accords. They plan to do with a combination of technical innovation (weatherization, appliance replacement, energy saving measures in their eco villages) and a strong ethic of municipalism. Their city government is going to engage in participatory budgeting to expand public transportation and food access. Ms. Atkins was careful to highlight the role of direct democracy in solving the climate crisis.

Ms. Gualinga summed it up in her keynote when she said “the solutions are going to come from women, from indigenous people, from humble people, from all of us.”