Make A Donation Click Here >
Home › Uncategorized › “Indigenous Peoples Knowledge is as valuable as Western Knowledge”: The Doctrine of Discovery and Creation Care at the COP 23 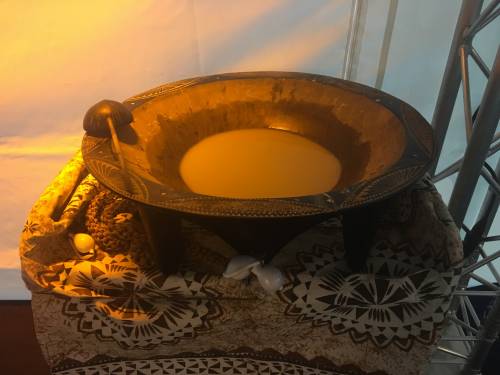 Kava, the Fijian national drink, is a root with strong medicinal properties meant to promote relaxation and well-being. It has been offered several times at the COP, especially after events or dialogues that are meant to redistribute power (between states and non state actors, or between countries in the Global North and the Global South).

Evidence of indigenous solutions to climate change are all over the COP 23; there is enormous double-hulled Fijian sailing canoe in the sleek glass and steel great hall of conference center. The canoe, or drua, is made of wood and fiber—the informational sign is careful to tell us that the boat contains no metal components. As a symbol of Fiji’s presidency of the COP 23, the drua is a reminder that we are all in the same canoe when it comes to climate change, but some of us have more to lose. 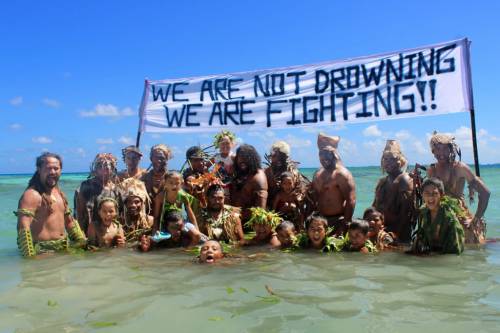 The Fijian leadership at this COP is significant not only in that they are a small island to which rising seas are an existential threat, but because Fijians have brought their native traditions and solutions to bear on the crisis. Some of these technologies are tangible, like a canoe or a drink, and some of them are intangible; a new set of practices. The Fijian presidency has replaced “facilitated dialogues” (a routine process of checking in on emissions goals between COPs, usually formal and transactional) with a process called a Talanoa dialogue. Talanoa is a traditional word used in Fiji and the Pacific to reflect a process of inclusive, participatory and transparent dialogue. The purpose of Talanoa is to share stories, build empathy and to make wise decisions, which are for the collective good. The process of Talanoa involves the sharing of ideas, skills and experience through storytelling. During the process, Parties build trust and advance knowledge through empathy and understanding. Blaming others and making critical observations are inconsistent with the building of mutual trust and respect, and therefore inconsistent with the concept of Talanoa. Talanoa fosters stability and inclusiveness in relation to dialogue, by creating a safe space which embraces mutual respect for a platform for decision making for a greater good.” By maintaining these practices in climate negotiations, we move from an extractive mindset to a collaborative mindset and greatly increase our chances of success. As colonization has violently erased traditional ways of being, we’ve lost many of the knowledges and practices that could ensure our survival on this planet. We must continue to embrace indigenous technologies as they are offered, as part of making good on our repudiation of the Doctrine of Discovery. 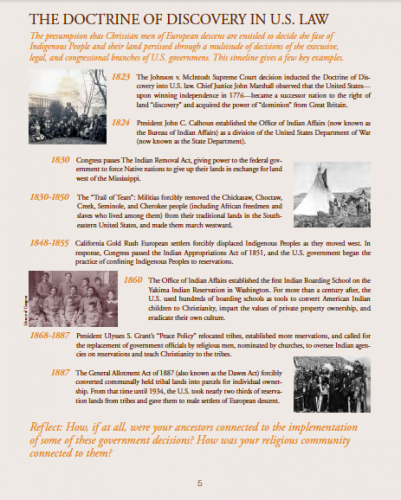 From the “Environmental Justice and Indigenous Peoples” Toolkit, linked at end of article

The 222nd General Assembly (2016) of the Presbyterian Church (U.S.A.) called the church to confess its complicity and repudiate the Doctrine of Discovery.The Doctrine of Discovery was first articulated in 1452 by Pope Nicholas V as the Papal Bull “Dum Diversas” and in 1496 by King Henry VII of England as a patent granted to John Cabot, which authorized and justified the destruction, killing, and appropriating of the lands of indigenous peoples and nations. The Doctrine of Discovery was incorporated into U.S. law in the 19th century when the U.S. Supreme Court ruled in the case, Johnson vs McIntosh, 1823, stating that European nations had assumed dominion over the lands of America upon discovery and as a result Native Americans had lost their rights to complete sovereignty as independent nations and retained a mere right of occupancy in their lands. A U.S. Supreme Court case as recent as 2005, City of Sherrill v. Oneida Nation of Indians, utilized the Doctrine of Discovery as legal precedent for the final decision. This doctrine laid the groundwork for the genocide of indigenous peoples around the world; the colonization of Africa, Asia, Australia, the Pacific Islands, and the Americas; and the transatlantic trafficking in persons used as slave labor.

The UN Climate Summit makes clear the cost of the Doctrine of Discovery to both the oppressed and dominator, and illuminates some of our responsibilities in repudiation. Indigenous peoples have gathered to express generations of pain and loss, and demand that saving their homes be prioritized and the solutions they bring be considered with sincerity. They make these demands not only in written statements but with song, dance, and traditional food and drink. Negotiations by countries in the Global North continue with business as usual, in grey conference rooms with rigid formality. The courageous steps we need to keep global warming below 1.5 C are not taken, year after year.

We, some of the beneficiaries of the Doctrine of Discovery are susceptible to the twin idols of greed and self sufficiency, and that susceptibility is rooted in the idea that we are to dominate over the land and her native people. Domination takes us further from God, indeed the fundamental mandate for creation care comes from Genesis 2:15, where God places Adam in the garden to “till it and keep it” (NRSV). A better translation from the Hebrew is “to serve it and to preserve it.” In Genesis 1:26-28, God blesses humankind with dominion over the earth. This acknowledgement that humanity is the most powerful species on earth does not, however, give license to dominate and exploit the planet. Indeed, the following verses affirm the right of animals to share in the bounty of the earth’s produce (Gen 1:29-30). We are harmed by a system of exploitation, isolation and consumption that puts us all in peril.

Repudiating the Doctrine of Discovery is a clear mandate not only to make apology for past events, but to change our habits and ways of being going forward. One primary way we can do that is by aligning our creation care ministries with the goals and instruction of movements for indigenous sovereignty and survival.

How might this look? In November 2016 at Standing Rock, more than 500 religious leaders burned a copy of the Doctrine of Discovery and took up the mantle of advocating and organizing in support of indigenous leaders at the encampment. In 2017, the Trump Administration disregarded the requirements to meaningfully consult tribes and complete a proper Environmental Impact Statement for the Dakota Access Pipeline. Although the Dakota Access Pipeline went forward, the advances made at Standing Rock were historic. Christian representatives shifted the frame of their advocacy from “water quality” to support of the tribe, and therein thousands of people awoke to matters of Indigenous sovereignty, environmental justice, and the power of prayer to unite.

In southern Utah, two massive rock formations that look like a pair of bears’ ears define the region’s landscape. Numerous tribes claim the region as their ancestral home. Unfortunately, petroglyphs, grave sites, and ancient cliff dwellings in the area have been looted, vandalized, or harmed by careless visitors. In 2015, five tribes issued a joint conservation proposal to President Obama. Religious communities supported their proposal as a step toward healing. In December 2016, by the power of the Antiquities Act of 1906, President Obama declared the Bears Ears National Monument. As of 2017, it is the only National Monument with a primary focus on the contributions of Indigenous Peoples. Some politicians in Utah were unhappy with the Monument and wish to see the land given over to the state. Facing threats of diminished protections, tribes are seeking allies to safeguard their ancestral land.

We have twin goals of reversing and mitigating the impact of a changing climate and making apology in service of right relationship with native peoples. The COP makes it clear that we cannot accomplish either of those goals in isolation, but rather that respecting the solutions of and supporting the sovereignty of native nations will help us restore balance with creation. We must make efforts across our ministries to pull away from systems of domination and towards lament, reconciliation and collaboration. 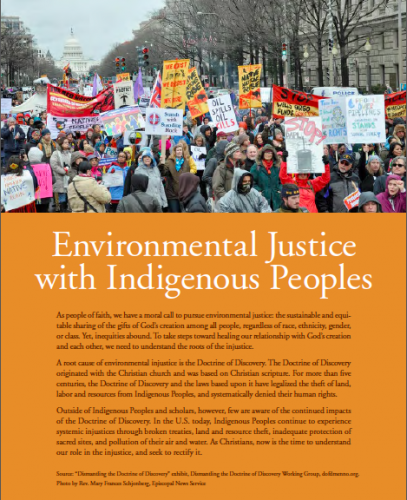