It is hard to imagine that globally 68 million people— 25 million refugees—have been forced from their homes. Faced with the largest humanitarian displacement in modern times, the U.S. Government has set the lowest resettlement target since the passage of the 1980 Refugee Act for fiscal year 2019. And yet, of this lowest goal of 30,000, we are on track to resettle only 21,000. Thousands who had been offered resettlement by the U.S., and cleared by its authorities, wait in limbo situations, many of them families from half a world away. After going through months of vetting, health screening and other steps, they must go back into the line and start over.

On March 31st we reach the halfway point of the fiscal year. As Presbyterians, we are called to stand with those who are suffering from social injustice. We have a moral responsibility to hold the administration accountable to resettling at least 30,000 refugees this fiscal year, and to urge them to set the admissions goal for FY2020 for at least 75,000 refugees. We invite you to join us for National Call-in Day on Wednesday, March 27th to tell Congress to protect refugees, asylum seekers, and families seeking protection.

No one becomes a refugee by choice, but the rest of us can have a choice about how we advocate for resettlement. Just as God provided for the Israelites in the desert, we must continue to provide for refugees in this country by putting pressure on elected officials to ensure the administration actually resettles at least 30,000 refugees this year.

Call Your Senators & Representatives:  You may click here to receive a phone call that connects you to your 2 Senators and 1 Representative. During that call you might find the following script helpful:

“I’m your constituent from [CITY/TOWN], and I am outraged that the administration has set the lowest refugee admissions goal in the history of the resettlement program—at just 30,000—and is not even on track to meet that goal. Resettlement is a core American legacy that allows refugees to rebuild their lives. I urge you to do everything in your power to see that, at the very least, the administration meets this year’s admissions goal and commits to resettling at least 75,000 refugees in FY 2020. I also urge you to affirm the right of all people to seek protection and asylum, and to see that the administration welcomes asylum seekers and respects family unity. To do otherwise violates U.S. and international law. My community welcomes refugees, asylum seekers, and immigrants, and I urge you to do the same.”

Here are more suggestions for how you can advocate for refugees and asylum seekers: #WhereRtheRefugees. As always, PDA continues to provide assistance to all refugee families with basic humanitarian, legal, and family reunification needs even as we press for more humane treatment by the U.S. Government. 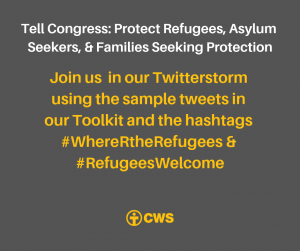 
One Response to “National Call-in Day on March 27th: Speak Out for Refugees Caught in Limbo”