‘We are moving from exhortation to implementation’

Photo by Sandy Millar via Unsplash

More than 135 people were on hand for a recent webinar as timely as it was relevant: Older Adults and Climate Change. Presbyterians for Earth Care offered the session, which featured brief presentations from three panelists:

The Rev. Jim Antal, a climate activist, author and public theologian who serves as special advisor on climate justice to the general minister and president of the United Church of Christ.

Dr. Dan Terpstra, a ruling elder at First Presbyterian Church in Oak Ridge, Tennessee; former moderator of Fossil Free PCUSA; a retired research associate at the University of Tennessee, Knoxville; and a member of the Presbytery of East Tennessee’s Climate & Energy Stewardship Team.

Resources cited during the webinar can be found here. Watch a recording of the webinar here.

“We are now decades behind where we should have been” in slowing down climate change, Tull told the large crowd. Older adults “are not guilty, but we are responsible to help revolutionize how we humans power our lives. We owe it to the people who did very little to create the problem.”

Here’s why restoring Creation can succeed, Tull said: We already have the knowledge, tools and technology that “we need to pull this off.” More and more people are getting involved, and technologies are getting less expensive. “And the government passed real climate legislation last year” in the form of the Inflation Reduction Act, Tull said. “We are moving from exhortation to implementation.”

“Presbyterians have great potential,” Tull said. They’re “high in skills” and many have above-average financial resources, “and our Christian faith calls us to honor and care for the Earth. We have a denomination that has resources and is organized to help us. We really do have the wind at our backs.”

Antal offered a brief biblical understanding of vocation. While we often think of God calling individuals, “God also calls communities, and the call to address the climate crisis is a communal call,” Antal said. “We are most free when we embrace our interdependence.” 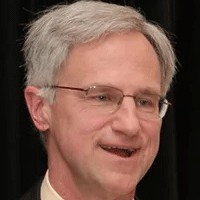 The Greatest Generation “recognized that World War II placed an inescapable moral claim on them,” Antal said. Millions sacrificed their lives. Churches turned their landscaped grounds into victory gardens. Millions of Americans became vegetarians so that U.S. troops could have the protein they needed to wage war on two fronts. “The Greatest Generation understood the importance of ‘we,’” Antal said. “As elders, we often have more influence than we recognize.”

He suggested churches do four things to address the climate crisis: preach on climate justice, get involved in advocating for policies to restore God’s Creation, hear one another’s testimonies, and “process our grief over the degradation of the Earth we love.”

“Forgive me if I get a bit Presbyterian wonky,” Terpstra said. “I’ve been a scientist and a Presbyterian most of my adult life. But I became a climate activist only a decade ago” after attending the Forward on Climate rally in Washington, D.C., in 2013.

That event led to Terpstra’s advocacy in divesting from energy companies. He and others have since expanded their gaze on divestment to include mid councils, churches and individuals. They’re also looking carefully at what banks do with the money that’s being invested, advocating for banks with relatively less of their funds invested in fossil fuel companies.

Once the panelists had completed their presentations, PEC Moderator the Rev. Bruce Gillette helped them field questions from webinar participants.

“It’s important to lead by example,” Tull said in response to a question, adding, “we’re all at a different level of excitement about doing new things. One thing that’s important to do is let our actions reflect our words.”

“Telling our stories about our struggles [over, for example, with whom we bank] can open up the conversation,” Tull said. “But it can take time to adjust to a new idea.”

“We have a long way to go,” Gillette said, “and we need to move quickly. We need to stress our sense of urgency.”

The webinar ended with the playing of Carrie Newcomer’s song, “If Not Now.”

Loving God, we know you through your Son, Jesus Christ, and we serve you as led by the Holy Spirit. May we respond to your call as servants even as we seek to be leaders in your church. Amen.