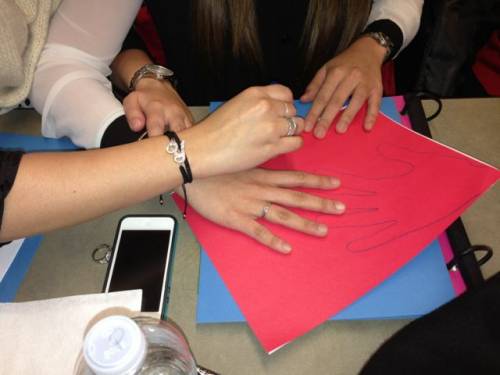 Participants in a seminar at the Presbyterian Ministry at the United Nations organized by the chaplain at Bloomfield College make Red Hands to say children should be children, not soldiers. (Photo by Mark Koenig)

LOUISVILLE – At least two and a half million people are trapped in modern-day slavery according to information released by the United Nations in 2015. One in four of those who are kidnapped, tricked or manipulated into some form of slavery such as forced labor, organ removal or prostitution is a child.

In 2013, the United Nations General Assembly approved a resolution designating July 30th as a Day Against Trafficking Persons, an effort to raise awareness of the problem and promote the protection of people’s basic human rights.

While the Presbyterian Church (U.S.A.) has fought against human trafficking for decades, it recently took action at the 222nd General Assembly (2016) to pull its various policies together.

“The goal of the policy passed by the 222nd General Assembly was for the church to have a comprehensive anti-trafficking policy,” said Ryan Smith, Presbyterian representative at the U.N. “We’ve had separate policies on sex trafficking or forced labor, but did not have one unified piece that brought it altogether. The intention of this policy was to do that.”

A second policy approved by the 222nd General Assembly calls on the church to look at its supply chains, reviewing every company or organization that it works with.

“Anything from your computer, to your desk or to the carpet in your office is provided through a supplier,” said Smith. “This policy calls on the denomination to work to make sure there is no slavery involved in our own supply chain.”

U.N. Secretary-General Ban Ki-moon last year stated that millions of vulnerable women, men and children are being “cruelly exploited” or co-erced into various forms of slavery.

“Trafficked persons are often tricked into servitude with the false promise of a well-paid job. Migrants crossing deadly seas and burning deserts to escape conflict, poverty and persecution are also at risk of being trafficked,” he said. “Individuals can find themselves alone in a foreign land where they have been stripped of their passports, forced into debt and exploited for labour. Children and young people can find their lives stolen, education blocked and dreams dashed. It is an assault on their most basic human rights and fundamental freedoms.”

U.N. officials say there has been no significant improvement in the overall criminal justice response to human trafficking. Officials add that governments must implement the U.N. Convention against Transnational Organized Crime and its Protocol on trafficking to protect trafficking victims.

While human trafficking remains a global issue, Smith says there are things the local churches can do to raise awareness and combat the problem.

“PC(USA) General Assemblies have called on churches to get involved in such issues as the Campaign for Fair Food, the boycott of Wendy’s Restaurants and even look at the coffee they serve,” he said. “Are churches going to the supermarkets and buying the cheapest coffee on the shelves or are they buying coffee that they can be sure does not have slaves in the supply chain? We ask people to work with the Presbyterian Hunger Program to address these types of questions.”

Smith says the church is also promoting the Tourism Child-Protection Code of Conduct Campaign with the travel/tourism industry to train staff and identify trafficking and respond appropriately if they notice it.

“Two years ago, the 221st General Assembly (2014) passed policy to work with agencies that have signed on to this code of conduct,” he said. “We have a postcard campaign where Presbyterians who are traveling give postcards to hotel clerks, airline workers and others, encouraging their company to sign on to the campaign.”

The Presbyterian Ministry at the United Nations also participates in the Presbyterian Red Hand Campaign which calls for the end of children being recruited as soldiers. Children and adults alike create red hands out of construction paper or paint and send them to world leaders. Smith says as many as 300,000 red hands have already been delivered.

Smith says church members can do a lot to educate themselves about human trafficking and commit to becoming aware of possible situations in their own communities, including the assessment of their own benefit from forced or exploited labor through a survey of one’s “slavery footprint.”