Christmas Joy Offering – Supporting our leaders: past, present and future.
Make A Donation Click Here >
Home › Welcoming Afghan refugees feels like ‘what we’re called to do as Christians’

As more than 100,000 Afghans come to the United States, churches are ready to welcome them 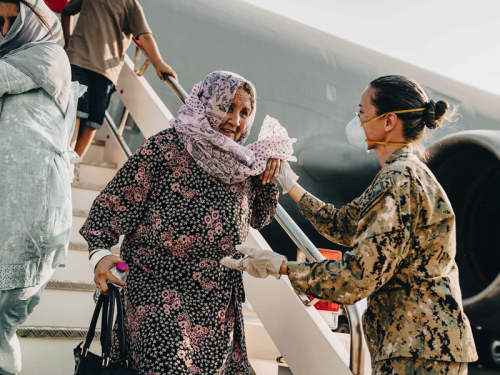 LEXINGTON, Kentucky — Watching the news as the United States military pulled out of Afghanistan after a near-20-year war, bringing with it thousands of Afghan refugees, members of First Presbyterian Church in New Haven, Connecticut, knew they wanted to help.

The church had a history of welcoming refugees, even declaring itself a sanctuary church a few years ago. So, members reached out to the local refugee resettlement agency IRIS (Integrated Refugee & Immigrant Services) and asked how they could help. IRIS mentioned several needs, including financial contributions and a place to store donations to a winter coat drive.

The Rev. Jocelyn Cadwallader says IRIS representatives came to the church to see the potential storage space. While there, Cadwallader showed them the church’s community building and said it could be used to temporarily house a family if needed.

That was a Monday. Cadwallader says, “On Tuesday, she called me back and she said … ‘Yes, we want to use you for housing. Could you accept the family on Thursday?’”

A Wednesday session vote and very busy night with about 30 church members later — all while the remnants of Hurricane Ida were dousing the Northeast — they had transformed the building into a home for an Afghan refugee family, complete with food, comfortable bedding, blankets, towels and such. There was only one hitch: the building didn’t have a shower.

The only thing is the shower takes a little time to build. Cadwallader and her family live in the church manse on the property, and she has let members of the Afghan family use their showers. But they are on the third floor of the manse and not accessible for a couple family members with disabilities. So, Cadwallader contrived a temporary solution involving her camper with an outdoor shower head and a tent for privacy pulled up next to the community center to provide a shower while the new one is being built. 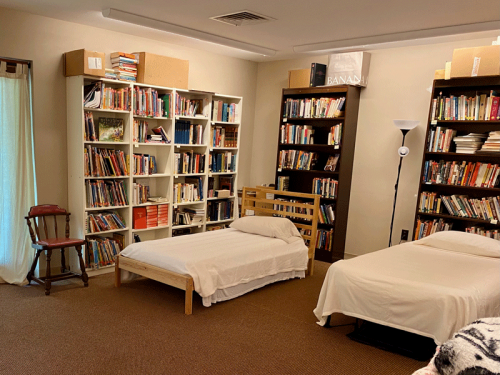 Members of First Presbyterian Church in New Haven, Connecticut, remade their community building into a temporary home for refugees from Afghanistan. (Photo by the Rev. Jocelyn Cadwallader)

“You do what you’ve got to do,” Cadwallader says, echoing a widespread sentiment as churches and resettlement agencies across the country ramp up capacity to provide welcome to more than 100,000 Afghan refugees, in addition to an increasing amount of refugee admissions since President Joe Biden took office.

Susan Krehbiel, Associate for Refugees & Asylum for Presbyterian Disaster Assistance (PDA), and Stacey Clack, Director of Community Sponsorship & Engagement for Church World Service, see stories like First Presbyterian New Haven’s playing out across the country as faith communities step up to provide welcome to people at this critical moment in their lives.

While resettlement agencies like to place refugees in long-term housing when they arrive, they say the combination of the volume of arrivals and dearth of affordable housing options are forcing everyone involved to get creative in accommodating refugees and maybe think in more expansive ways about their resources. Clack notes a church in Columbus, Ohio, that has offered a house and several apartments it owns to house refugees. Krehbiel notes a Presbyterian camp near her that is looking at opening its accommodations for refugees.

“It’s been so encouraging for me to be at work the last four weeks,” Clack said. “I told my husband the other night, I feel like I’m getting this renewed sense of humanity. People are stepping up to the plate, realizing that there’s a need and being willing to maybe sacrifice themselves a little bit to be able to offer a welcome to a new family that is in desperate need of it.”

From her position, Clack says she is seeing people from across the ideological spectrum interested in helping, not just denominations like the PC(USA), maintaining a role in immigration even through a dramatic reduction in admissions to the United States the last four years. Those reductions prompted many resettlement offices to severely curtail their staff and services, so now they are trying to ramp up their operations as they see an influx of cases.

Even in the PC(USA), Krehbiel says she is seeing a surge in interest. In her home Presbytery of Baltimore, she says a presbytery-wide call about resettlement attracted a third of the churches in the presbytery, whereas similar events in the past attracted a handful of participants.

Upcoming Afghanistan webinars from PDA and the Office of Public Witness

But there are places where the desire to help exceeds demand. University Presbyterian Church in El Paso, Texas is accustomed to providing welcome to immigrants crossing the U.S. Southern Border with Mexico, and the church is ready to provide similar welcome to Afghan refugees. But they have not seen them, as most refugees in the area are being housed at Fort Bliss and out of the sight or access of the community.

“We’re frustrated we can’t get in and we are not able to provide, at the very least, some basic welcome,” said the Rev. Tim Gray, co-pastor of University Presbyterian.

Gray says he has heard people housed at Fort Bliss are told they can leave. But being in the desert in a foreign country, he says it’s understandable refugees would not want to leave. Not being able to go onto the base, Gray said they do not know how refugees are being treated. So, he said, they wait for the opportunity to welcome Afghan refugees.

“El Paso is a people who know who we are,” Gray says. “We’re immigrants, and we know what it means to be welcomed. So why wouldn’t we want to express that to those who are coming in now?” 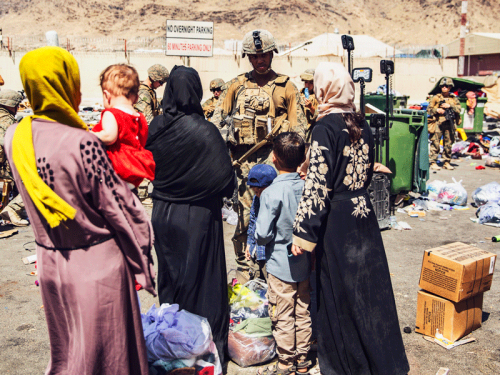 Marines process evacuees at Hamid Karzai International Airport in Kabul, Afghanistan, on Aug. 28. Many Afghan evacuees will be making new homes in the United States with help from churches and faith communities. (Photo by Marine Corps Staff Sgt. Victor Mancilla, Department of Defense)

Krehbiel said PDA and CWS believe in 2022 they will need many more University and First Presbyterian New Havens ready and willing to provide welcome. There are many roles to be played, she said, including government to evacuate refugees, legislators to enact laws that give refugees benefits, professional agencies like IRIS to help refugees navigate the details of resettlement, and “community members to be the actual hearts and hands that welcome people.”

Clack says churches that engage in welcome really expand their perspectives on their communities and deepen their commitments to justice work.

“Something that we talk about a lot is community transformation,” Clack says. “As churchgoers get involved in this work, they become closer to systems of potential inequity or inequality, or even gaps in their own communities. And then, because they’re close to them, they become more aware, they become advocates, and then they become catalysts for change.”

Churches also become committed to the work of welcoming.

Despite the challenge of building a shower and communicating with her guests in Farsi through Google Translate, Cadwallader says, “There are few times that it seems easy to follow Jesus’ teachings, and welcoming the stranger is really easy. And it feels like fulfillment of the mandate of the Gospel. It feels like a no brainer. It feels like this is what we’re called to do as Christians.

“Don’t get hung up on the details. Just build the shower.”