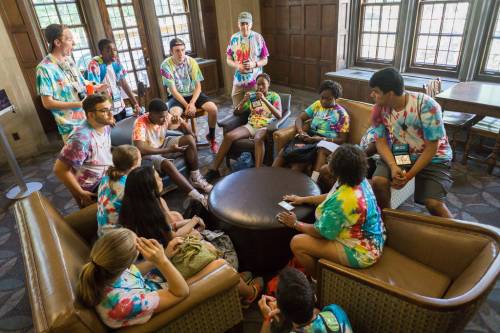 A small group gathers for discussion in Purdue’s Memorial Union during the 2016 Presbyterian Youth Triennium. (Photo by Gregg Brekke)

“Small groups at Triennium are really one of the only opportunities young people in the church have to come together from all across the country and globally to be in conversation with one another in ways that aren’t replicated in any other setting,” said the Rev. Grier Richards, associate pastor for Discipleship at the White Memorial Presbyterian Church in Raleigh, N.C., who is serving as the 2016 Presbyterian Youth Triennium’s small group ministry team coordinator.

The Presbyterian Youth Triennium (PYT), a gathering for high school age youth from the Presbyterian Church (U.S.A.) and the Cumberland Presbyterian Church, occurs every three years. The 2016 event, themed “GO!,” has attracted more than 4,700 young people and their adult leaders this week to the campus of Purdue University, where the event has been held since 1983.

At the 2016 event, there are a total of 90 small groups meeting over three sessions throughout the week, the last of which will be held this afternoon, Friday, July 22.

“We are a great team, all really contributing to different aspects of this ministry,” said Skilling, a college sophomore from Santa Ana, California, who was a youth participant in 2013 and wanted to come back. “We are creating a community within a community.”

Richards said that when the coordinating team first started meeting, they could never have imagined how relevant and important the 2016 missional theme “GO!” would be. “It’s a ‘flipped’ experience this year, in that Triennium is all about what happens when you leave, about going back into the world,” she said. “Coming here is preparing us to go home.”

Youth participants and their small group leaders—many of whom have served at multiple Trienniums—are engaging deeply with the material prepared for the small groups by Samantha Hassell, director of Christian Education at Sturgis (Kentucky) Cumberland Presbyterian Church.

“Going has the most impact when the process of Going involves thoughtful reflection with oneself and others,” explained Hassall in describing the theme in the manual she wrote for the 2016 PYT. “Go is a command. Go is a directive. To ‘Go with God’ is to embark on a ‘worthy adventure.’”

Willie Brown, an elder and delegation leader from the Old Stone Church in Cleveland, Ohio, affirmed the importance of small groups in “bringing out what kids think about God, their perceptions.”

At this year’s event, small group time rotates on the schedule with delegation group time, where the young people are also being asked to consider how they will “Go” once they leave Purdue and they return home with those from their home congregations, presbyteries and other regional groupings.

Representing one such regional delegation, comprising churches in Nebraska and Iowa, is Dave Fritz, a ruling elder from Laurel (Nebraska) Presbyterian Church, who has been coming to Triennium since 2004. Fritz is joined at this year’s event by a son, daughter-in-law and their oldest son.

Because of the structure of the 2016 schedule where small group and delegation group time run concurrently, Fritz—like all of this year’s small group leaders—has been called upon to convene two entirely different groups of roughly 18-24 young people each, along with their adult leaders.

“Each year is amazing, and each year is different,” said Fritz, who retired a year and a half ago from a varied career in law enforcement, farming and computers. “Each year teaches me more truth about myself and my faith. I will do everything in my power not to miss this event.”

Fritz believes that youth are the “now” and not just the future of the church. “They’re already starting to make changes in the church and in the nation,” he says. “I also see an open acceptance of differences—they are more inclusive of others, which is a very good thing.”

Presbyterian Youth Triennium continues through Saturday, July 23. Presbyterian News Service will continue to post stories from the event and live event information can be found on Twitter via this link: https://twitter.com/search?q=%23pyt2016