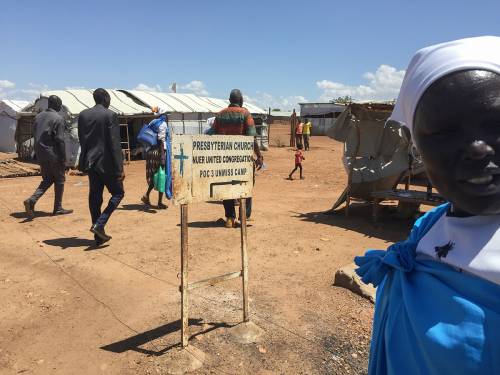 A large camp of IDP’s in South Sudan near the city of Juba. (Photo by Laurie Kraus)

LOUISVILLE – Severe famine and ongoing fighting between ethnic groups have made survival difficult for millions of people in South Sudan. As a result of the deteriorating conditions, Presbyterian Disaster Assistance (PDA) has issued an appeal.

“Half of the population, six million out of 12 million people, are experiencing food vulnerability, and lack of water is always a problem,” said the Rev. Dr. Laurie Kraus, PDA director. “Because of the violence, another four million people are fleeing to camps for Internally Displaced Persons (IDPs) in the capital city of Juba, or leaving for refugee camps in neighboring countries.”

Earlier this year, the United Nations declared a famine in the country. The ongoing conflict in the region has disrupted attempts by farmers to make any lasting improvements. The poor agricultural conditions, along with drought, have created life-threatening conditions.

“South Sudan is a six-year-old country and for four of those six years, it has been embroiled in internal conflict,” said Kraus. “Widespread violence, much of which is targeting particular ethnicities, is making life dangerous throughout the country.”

PDA is funding large-scale emergency relief projects and working through Presbyterian Relief and Development Agency (PRDA), the humanitarian arm of the Presbyterian Church of South Sudan (PCOSS), to find solutions to the growing challenges which are now spilling over into neighboring countries as hundreds of thousands leave their homes.

“Uganda, for one, has been extremely committed to welcoming and supporting their neighbors. But it has put a strain on that country as well,” said Kraus. “Many of the communities around the larger camps are also struggling for a decent livelihood.”

Earlier this year, Kraus visited one of the camps outside of the capital city of Juba with colleagues from PRDA and arrived to a warm welcome.

“Women and men shared stories with us about what life is like in the camps. They told us reliable access to enough food and clean water is an ongoing challenge,” she said. “There is a lot of disease in the camp and the elderly and small children are very vulnerable. The death rate in the camps has risen because of a lack of nutrition and the inability to treat these diseases.”

Kraus says the conditions have made it difficult for the people to hold out hope.

“They took me to the Presbyterian church in the camp, a mud brick building with a metal roof. A thousand children sit side by side in class groupings, but there are no room dividers or supplies to support learning,” said Kraus. “This is a tent camp, stretching as far as the eye could see. Those who did not have tents stayed in shelters, put together with sticks, mud and maybe a tarp. But people are working for the future, for a sustainable life. I also saw papaya plants out of the back of some huts as people tried to cultivate and grow food to make a life for themselves as best they can.”

Kraus says the United Nations has established a few schools and one Presbyterian school has up to 1,000 children attending.

“They meet when they can, sit on rocks or plastic chairs. They don’t have chalk boards or books but a lot of the young adults are willing to teach,” she said. “I don’t think I’ve ever been in a place that had fewer resources yet worked so hard to maintain education, faith, and civil society.”

Most of those fleeing their homes have headed for Juba.

“Juba is experiencing periodic flare-ups of violence. A lot of the outlying villages experience violent attacks that impact their ability to cultivate their land,” said Kraus. “It is a complex emergency and it has been getting progressively worse in the last several months.”

For more information on how to support South Sudan, click here and click here to give online, designating gifts to DR000042.