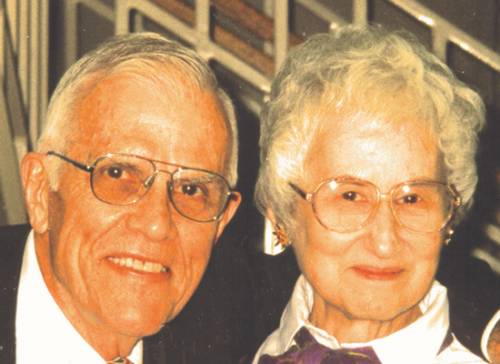 Jean and George Edwards met as teenagers at a Southern Presbyterian Church camp in the 1930s, then lost touch after the United States entered World War II. The two reconnected at a church conference after the war. According to Jean, her decision to marry George was rooted in their shared desire to follow Jesus Christ by witnessing against war. As Jean remembered, “I knew we would never, ever argue about pacifism.”

Jean and George’s ministry for world peace would serve as the foundation of their life together throughout their 63-year marriage. In 1975 Jean and George founded the Louisville Fellowship of Reconciliation, a local chapter of the nation’s oldest and largest pacifist organization. The chapter organizes rallies, marches, boycotts, and nonviolent civil disobedience to work for de-militarization, racial and economic justice, and LGBTQ+ equality.

In the 1980s Jean and George withheld the portion of their federal income taxes earmarked for the military. Their logic was if the Selective Service system recognizes conscientious objection to war, why shouldn’t the tax code? To spare Louisville Seminary from any kind of embarrassment from his civil disobedience, George retired following nearly 30 years as a Professor of New Testament. Nevertheless, Jean and George remained close to the seminary, where George taught and studied (he was a 1951 graduate) and Jean worked as a faculty secretary.

Jean and George’s life and ministry is the subject of the book, “Through with Kings and Armies: The Marriage of George and Jean Edwards” (Cascade Books, 2012), which was written by Louisville Seminary alum Rhonda Mawhood Lee (MDiv. ’05).

“Because Jean Edwards loved Jesus, she devoted her life to seeking peace,” said Lee, canon for regional ministry with the Episcopal Diocese of North Carolina. “Because she loved George Edwards, and he loved her, she had a partner in that tireless quest for over 60 years. I’m grateful for their witness, and I will hold both George and Jean in my heart as I do what I can to honor their memories through my own ministry.”

In 1986, Louisville Seminary established the Edwards Peacemaking Lectureship to honor Jean and George for their faithful leadership in Christian efforts for peace and social justice. The George and Jean Edwards Award was established in 1993 to honor Jean and George for their work on issues of peace and justice and is presented to a graduating senior at commencement. Jean and George are also the namesakes of the Edwards Award in the Interpretation of Scripture to Christian Life — particularly to issues of peace and justice, which was first given in 1993.

“Jean, along with her beloved George and their entire family, have been synonymous with Louisville Seminary since 1947,” said Louisville Seminary President Alton B. Pollard, III. “Jean was a gift to us. Our hearts sing in knowing that hers was a life splendidly lived.”

Jean Edwards was preceded in death by her husband, George Edwards, and is survived by her three children, Virginia “Ginger” Edwards-Menz, George “Riley” Edwards-Raudonat, and John D. “Johnny” Edwards.

Founded in 1853, Louisville Seminary offers an inclusive and diverse learning community, welcoming students from wide ecumenical backgrounds while maintaining its long, historic commitment to the Presbyterian Church (U.S.A). Louisville Seminary is committed to building bridges across the world’s religious, racial and cultural divides. It is distinguished by its nationally recognized marriage and family therapy and field education programs, the scholarship and church service among its faculty and a commitment to training women and men to participate in the continuing ministry of Jesus Christ. For more information, call (800) 264-1839 or log onto www.lpts.edu.