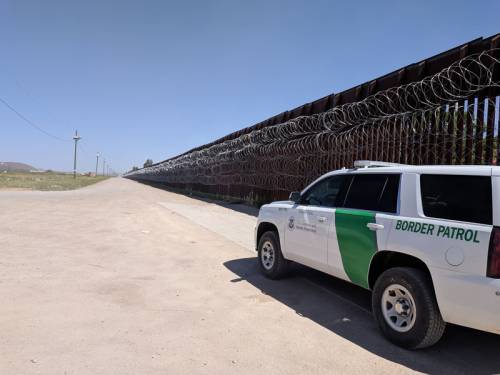 A truck patrols the border in Douglas, Ariz. (Photo by Philip Woods)

LOUISVILLE — Nearly 400 people took  part in Tuesday’s Office of Public Witness webinar offering viewers, among other suggestions, tips on how to respond to people seeking asylum or refuge in the United States — and ways to lobby their member of Congress to alter the laws and budgets that impact people fleeing their country for a new life in the U.S.

Sutphin identified some root causes of migration, both “push” and “pull” factors that tend to push people out of one country or pulls them into another. Among the former: persecution, war and violence, poor wages, crop failure, natural disaster and climate change. Pull factors which draw people to the U.S. include safety and stability, freedom, higher wages, a better environment and educational opportunities.

Three of the last four General Assemblies have, she noted, advocated for comprehensive immigration reform (2012), passed a resolution on responding to sisters and brothers who are refugees or are internally displaced (2016) and called on the Trump administration to stop separating families (2018).

Haugaard said most people emigrating from the Northern Triangle in Central America — Honduras, Guatemala and El Salvador — leave not because there’s a war going on, but because they’re fleeing violence. Those in danger include young people threatened by forced gang recruitment, which Haugaard called “a real and present danger.” Many women seek to escape domestic violence, and people in the LGBTQ community also are looking for protection against violence. People waiting on the U.S.-Mexico border must deal with kidnappers who demand ransom of victims’ families.

She urged listeners to “oppose budgets that enforce inhumane treatment” and to educate fellow church-goers, neighbors, friends and family “that the people fleeing Central America are human beings. They’re mothers and fathers protecting their children, and they’re children and teens fleeing violence. They are worthy of our respect and our caring spirits.”

Graf Evans said the administration’s policy of allowing enforcement and humanitarian agencies to share information will lead to more deportation and will mean a growing number of children will be in U.S. custody rather than being reunited with their parents.

“Congress can stop this,” she said. “Congress funds these policies.” Instead, she said, Congress has over the past two years authorized billions of dollars for the border wall, border agents and the expansion of immigrant detention facilities.

While members of the U.S. House and Senate are home for the August recess — many engaging in town halls while they’re in their district or their state — here’s what their constituents can ask them to do, she said:

“Your members of Congress really need educating on how they should be responding,” she said. “That’s an important way you can help start this conversation.”

Noel, who has accompanied migrants both in Colombia and along the U.S.-Mexico border at Agua Prieta, Sonora, said that accompaniment work can also be done in one’s community, including attending immigration court hearings, sending direct assistance, educating immigrants on their rights, visiting them in detention and providing “rapid response” when people are dropped off in a community with few clothes to wear and little to eat.

“Get to know what is going on in your community and in your presbytery,” she said.

“This is such a difficult time for those of us working on these issues,” Gordon said to wrap up the webinar. “It’s a sad, sad time — but it’s also time for us to take action. We hope you will use this as a resource to take action with Congress and educate your community.”