Inspiring faith in our youth. Support the Pentecost Offering.
Make A Donation Click Here >
Home › Cyclone recovery in Southern Africa will be a long-term effort 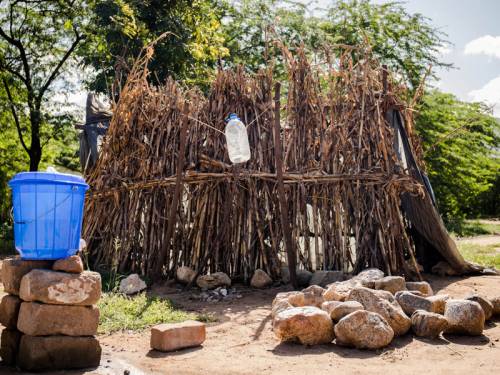 Following Cyclone Idai, the Chikunka Campsite in Malawi has 1,360 people. This is one of the only two toilets available. (Photo courtesy of ACT/Bellah Zulu/NCA)

LOUISVILLE — It has been three weeks since the Southern African countries of Mozambique, Malawi and Zimbabwe were slammed by Cyclone Idai, packing winds of more than 120 miles per hour and torrential rains that produced catastrophic flooding.

But, as first response rescue efforts continue, it is becoming clear to aid agencies such as Presbyterian Disaster Assistance (PDA) that recovery is going to be a long process in this region. That brings with it the challenge of keeping people’s attention focused on recovery in distant nations when the media gaze is turned to newer disasters, maybe closer to home.

“That’s why you have a national office in a church that has a stated commitment to providing attention and care to all of God’s children, not just the ones that are obvious, interesting or beneficial to us in some way,” says the Rev. Dr. Laurie Kraus, director for Presbyterian Disaster Assistance. “We have a commitment to tell those stories and respond, whether people are noticing or not. But it is challenging sometimes to hold people’s interest.”

Cyclone Idai grabbed attention when it happened, followed by statistics that have become more staggering as time goes on.

The death toll across the three countries stands at nearly 1,000, according to various news sources, with more than 129,000 displaced people in Mozambique, 250,000 affected by floods in Zimbabwe and 17 out of 28 districts affected in Malawi, according to ACT Alliance, which PDA partners with in global disaster recovery. One of the current concerns is an outbreak of cholera and other water-borne illnesses, according to the United Nations.

Click here to give to PDA’s work in Southern Africa.

“This has turned out to be larger than it looked like it was going to be,” Kraus says of the damage from the storm, which is now being called by numerous authorities one of the biggest cyclones to strike the Southern Hemisphere. “They’re really just getting to the point now where some of the flood waters have receded sufficiently so that people can go in and begin to do body recovery, other people can go in to see if there’s anything left of their village or their personal belongings.”

There are added challenges working in an area that has grappled with systemic poverty in its recent history, and now has had much of its infrastructure decimated by the storm. 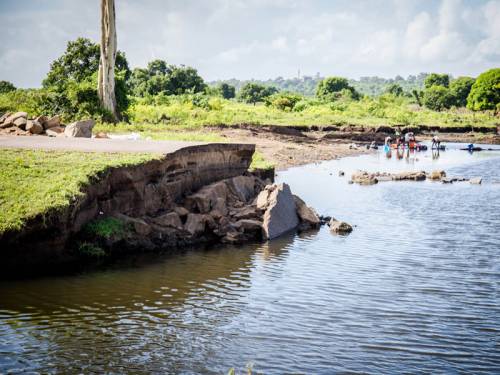 The washed-away road shows the extent of the flooding experienced in Malawi. (Photo courtesy of ACT/NCA/Bellah Zulu)

In the early days of the disaster, PDA has been working through ACT Alliance, a coalition of 151 churches and faith-based organizations working in more than 125 countries, channeling donations to the group for immediate needs. As rescue turns to recovery, the Presbyterian group will be looking at how to best use resources not only to aid recovery but improve conditions in the region.

It’s a process PDA is exceedingly familiar with, and Kraus can point to recent successes such as earthquake recovery in Haiti, where long-term recovery efforts included creating sustainable schools and employment opportunities.

She says in long-term recovery, PDA often partners with fellow Presbyterian Compassion, Peace & Justice ministries such as the Presbyterian Hunger Program and the Committee on the Self-Development of People to complete projects that make things better than they were before the disaster. All three of those programs are supported by the One Great Hour of Sharing special offering.

Kraus says Church World Service and ACT Alliance are particularly adept at working with people in affected areas to determine needs and then share those needs with disaster recovery ministries to see where they can help.

“In any good disaster response, you’re working collaboratively,” Kraus says. “You’re pulling in agencies that have relationships and specific skill sets to offer, and at best, what disaster response and long-term recovery does is it puts everyone at one table to say we have this, and we know these people, and these folks did work for us before and we know that they can handle this and here’s something we’re all missing.”

In addition to funds specifically earmarked for Southern Africa disaster recovery, Kraus and Oliver say non-specified disaster relief funds are extremely helpful in lower-profile situations that may not get extensive media coverage but desperately need help.

“One of the other things that’s really lovely about some of the fundraising that happens around PDA is that a lot of our constituents and partners in the church know that there are disasters that won’t get attention,” Kraus says. “So people, even during a large-scale disaster that gets a lot of public attention, will sometimes — frequently — give to our general fund to say we know there are many, many needs that don’t get the megaphone of the large-scale disaster, and we know that PDA is going to show up and be there for those as well, so we want to give to your general fund so you can meet those needs.

“That’s what we’re trying to do is give the church the opportunity to extend care even to people they don’t recognize, because Christ is in all people, God is in all people.”

Click here to give to Presbyterian Disaster Assistance’s general fund.