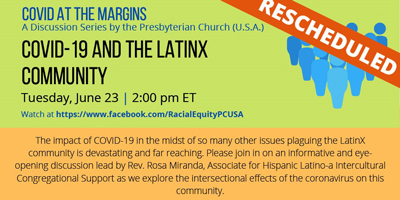 LOUISVILLE — 2020 will certainly be remembered as a year of full disclosure for the United States. A tiny virus too small for the eye to see has disclosed and exposed the grave injustices and disparities that exist for Black and brown communities across the nation.

Tuesday’s COVID at the Margins episode examined how the pandemic is impacting Hispanic/Latino-a communities. As the Rev. Rosa Miranda, Associate for Hispanic/Latino-a Intercultural Congregational Support in the Racial Equity & Women’s Intercultural Ministries of the Presbyterian Mission Agency, welcomed viewers to the online series, her opening comments called attention to the fact “that this pandemic has exposed many of the racial issues and injustices that our Latinx communities have suffered for a very long time. It also has required our communities to take more and higher risks … thus paying higher tolls because of all the huge lags in basic services and rights even before the pandemic.” 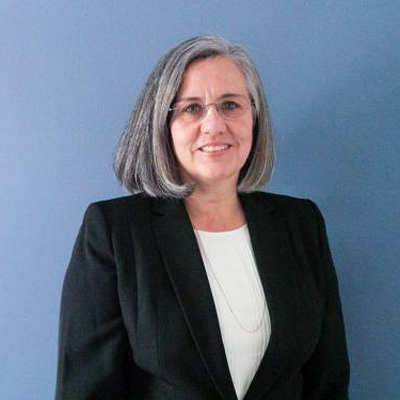 To frame the conversation, Miranda read Leviticus 25:23 from the Contemporary English Version of the Bible: “No land may be permanently bought or sold. It all belongs to me — it isn’t your land, and you only live there for a little while.”

“Migration, or as my people say, ‘going north or south,’ is an ancestral journey,” said Miranda. “For centuries migration from one tip to the other of the continent has been part of our culture and history.”

Miranda says that it was the actions of Pope Alexander VI who in 1493 issued the papal bull “Inter Caetera,” the basis for the Doctrine of Discovery which led to dispossession, slavery, death and dehumanization of Native peoples, that was the breaking point that changed the course of history for Indigenous people.

“Nowadays, migration from Latin America continues to be a consequence of the treaties and policies implemented by governments, world financial organizations and corporations,  that dispossess people from their lands, create devastation, lack of opportunities to make a living, generates corruption and violence, and keeps people impoverished,” she said.

“The way in which our world’s socio-political economy is structured today is rooted and nurtures itself to grow and strengthen systems that perpetuate poverty— fear of the other, individualism and focus on differences, racial and gender injustice, ignorance and thus low education levels, no access to preventive health care or housing. “

Muñiz-Vega says you cannot talk about the response to COVID-19 in Puerto Rico without putting it into context. Vega says Puerto Rico is still recovering from Hurricane Maria, which hit the island almost three years ago. It is estimated that today there are almost a thousand houses without roofs or with roofs that need repair. “Homes still have blue tarps since Maria,” she said. “This is not counting houses that were affected or destroyed by the earthquakes in January. One of our municipality islands still doesn’t have a hospital. And now there’s a pandemic.”

Vega says the that it is difficult doing the recovery work in the midst of the pandemic. “Now we have to wear masks and have social distancing,” she said. “Culturally, that’s something that has affected us. Caribbean people in Puerto Rico, we love to hug. We love to show love to the kids. So, there’s a change of culture.

Vega says poverty is another issue impacting Puerto Rico as it relates to recovering from the pandemic and other disasters. “It is estimated that over 40% of the population lives under the line of poverty,” she said. “Mental health has been in decline and especially after financial depression. We can go back before Hurricane Maria see how finances have been a challenge on the Island. Lack of medical resources has had an effect on the mental health of the people here in Puerto Rico.”  Vega says the financial struggles in Puerto Rico compounded with the disasters have resulted in a large number of people from Puerto Rico moving to the States and bear the burden of starting all over.

She noted that lacking access to resources is also an obstacle for people in Puerto Rico. “I always like to remind people that the problems of logistics, access to resources and dynamics that Puerto Rico has to face is definitely the colonial relationship that Puerto Rico still has today with the United States and how that limits not only the resources but recovery efforts,” she said. Vega commented that the 100-year-old Jones Act as the reason countries near Puerto Rico have not been able to bring shipments with items needed for recovery after the hurricane and subsequent earthquake.

Vega say the same hindrances impacting the Island after those disasters remain obstacles during the COVID-19 pandemic and that the pandemic has served to put a real spotlight on these issues.

COVID-19 has also disproportionately impacted the immigrant community in Durham, North Carolina. However, Ramirez-Eve is on the frontline working to stand in the gap for those in need. His small church started a food pantry a few years ago. The food panty was initiated by a community leader who asked Ramirez-Eve, “What we can do?”

This was during the recession in 2008 because of the Hispanic community was in good and bad shape. Ramirez-Eve says from that time until today they have been working in the community feeding 40 to 80 families weekly. As a result of the pandemic, he said, “Right now, we are feeding 3,050 families a week.”

The ability to feed this many people was not something Iglesia Presbiteriana Emanuel accomplished on its own. Ramirez-Eve says they reached out to other local churches for assistance. “We provide food and economic assistance to help people pay their rent,” he said.

Ramirez-Eve says right now, Hispanics are 60% of the patients in the hospital but represent only 4 percent of the population. He says that’s why it’s important that his congregation work with the community and encourage the community to take care of themselves and to educate themselves during this pandemic.

Ramirez-Eve continues to work to build community partnerships to meet the needs of Durham’s immigrant community, especially during the time of COVID-19.

Fernández, the director at Puentes de Cristo, a Presbyterian border ministry, says the virus has magnified some of the issues that have existed in South Texas for decades. One of those existing issues is colonies, unincorporated communities that lack infrastructure such as potable water, sewage and/or paved roads. Her ministry has a mobile food pantry. They have partnered with Texas A&M University’s Colonies program to assist the residents in the colonies who have been living in crisis mode for a long time.

“We’re meeting with leaders in the colonies that really have the pulse of their community and talking with them on a weekly basis and taking food and essential items in our mobile pantry, which is my vehicle,” said Fernández.  “We’re really addressing the food security issues and also connecting them with other resources.”

Fernandez say her organization will be expanding ira work to include a community needs assessment. “We’ll be meeting with one of the colonial leaders. We’re going to develop a needs assessment that she will go door to door in her Colonia and find out what some of the most critical needs are. Every week that we go, we hear new stories of families with chronic disease that don’t have the supplies to manage their diabetes, or elderly people that are isolated, for example.”

Fernandez says she feels privileged to partner with the colonial leaders and community health workers and to hear their stories and hopefully help to improve living conditions. “I love the way that they filled the gaps in for each other,” she said. “I experienced that when I visit our partnership in Cuba. It’s so similar. I mean, we’re talking about different groups of Hispanic populations, but there’s so much that crosses over to all the groups. Mental health issues have also been a big issue … depression, fear, isolation, uncertainty … Colonials lack the ability to visit health care facilities,” so they have “sessions where they get together and they do talk therapy and they share resources. Someone may have a little bit more food and so they share with another family or someone may have baby wipes, and they share.”

“So we’re hoping when the numbers go down here and  our state is open, as soon as things get a little better to visit the colonials and partner with them to provide health, education, and health screeners, and then long-term plans, we’re going to have a mobile clinic where we can visit the colonials,” said Fernandez. “The health care disparities on top of all the other issues down here, economic issues, there’s so much poverty, and the huge health care disparities and access to health care are the things we’re hoping to help address.”