Congregation responds to Jesus’ ‘I was’ statements 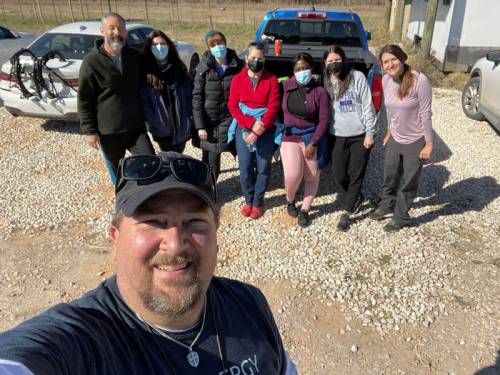 Three years ago, if you were to ask Austin, Texas, residents what they knew about Hope Presbyterian Church, chances are they would have remarked on the beautiful roses on the property. Not much would have been said about its mission — until now.

The congregation — which said “yes” to the PC(USA)’s invitation in 2019 to see Christ in one another and serve boldly the least of these — has been on a path of revitalization, honing its message to the community that Hope is a church involved in helping its neighbors.

“Before Matthew 25, if you were to ask what our mission was, you would get 50 different answers,” said the Rev. Josh Robinson. He is not the only clergy to observe the mission-of-the-day phenomena, citing that often the one holding “the mission reins” is the one whose projects get supported.

After Hope’s session spent “a good six months” praying what living out Matthew 25 would entail, they came to realize that all mission work needed to be framed around the six “I was” statements in the Scripture: I was hungry, thirsty, a stranger, naked, sick and imprisoned. “These righteous acts are now the basis of Hope’s mission work for the next five years,” said Robinson, adding that even the endowment committee reviews grant applications through the lens of how requests fulfill Matthew 25.

The session introduced Matthew 25 to the congregation in the season of Epiphany, using the time to have “members think about what gifts they had to present to Jesus,” said Robinson.

To help its members not just hear about Matthew 25, but act, the session developed what they called “rapid responses.” For example, a “rapid response” to Jesus’ “I was in prison” was recommitting to the church’s prison letter-writing ministry. As members were responding to the calls to action, Robinson was listening to the stories within the community from leaders, whom he invited to talk to the session. That led to Hope realizing that they couldn’t just focus on vitality but had to engage with the other two Matthew 25 focuses: poverty and racism.

“Matthew 25 has shaped the vision of our congregation,” Robinson said. “We’re now known as that congregation that feeds the hungry, gives drink to the thirsty, clothes the naked, cares for the sick, welcomes the stranger and reaches out to the imprisoned.” And the roses? They’re still blooming beautifully.

Loving God, thank you for providing communities in which we can learn and grow in our faith journey. Strengthen our commitment to build relationships as we work to change our world. Amen.