Gun violence prevention is the pressing goal around the country 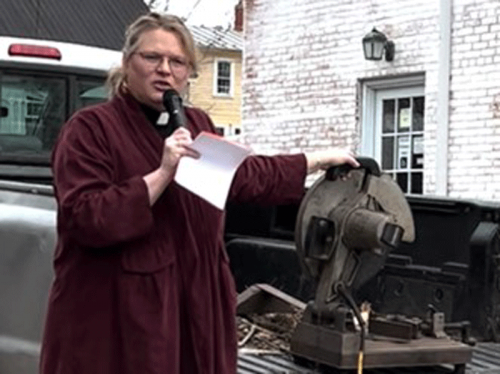 The Rev. Gusti Newquist, pastor of Shepherdstown Presbyterian Church in West Virginia, leads a prayer vigil for a “Blessing of the Saw” before the truck-mounted dismantling of guns. (Photo courtesy of Leslie Williams and Dave Smith)

Winter is no match for Americans who are weary of gun violence and who are determined to do something about it. From Dec. 3–10, from a frigid church parking lot in Cambridge, Wisconsin to a rainy day in Decatur, Georgia, church members and others fired up their chop saws to join the Guns to Gardens movement. Their goal? Transforming unwanted guns into garden tools.

From education to legislative advocacy to projects like Guns to Gardens, churches in particular are taking a lead to save lives.

“It was so good to feel that we could do something,” said Presbyterian Soni Castleberry, one of the leaders of the Guns to Gardens Safe Surrender event at Douglass Boulevard Christian Church (Disciples of Christ) in Louisville on Dec. 4. “In our city, there has been a murder almost every day in the last month. Guns to Gardens is something we can do to make a difference.” The Louisville event united many congregations: Baptists, AME, UCC, Presbyterian, the Presbytery of Mid-Kentucky —  and a Jewish blacksmith who will turn the dismantled gun parts into garden tools and jewelry.

Guns to Gardens is a growing national movement, now reaching to 30 states. In the face of more than 47,000 gun deaths last year, Guns to Gardens is a form of voluntary direct action that American citizens are taking to help prevent gun violence and to encourage elected officials and others to do even more. 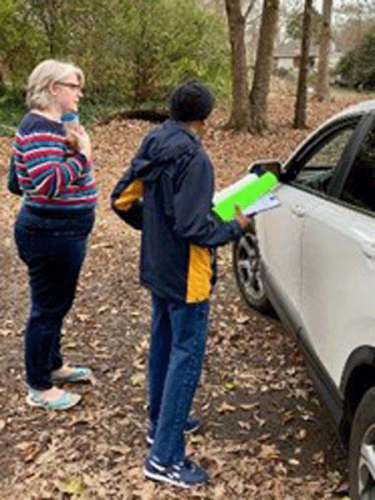 Altogether at the recent events, 542 unwanted firearms were collected to be dismantled and transformed, as the New Haven event organizers described it, “from taking life to making life.” A significant number of the guns were assault rifles and semi-automatic weapons. The December events are part of a nationwide memorial for the Sandy Hook school shooting which occurred in Newtown, Connecticut, 10 years ago this month, killing 20 second graders and six school staff.

With well over 400 million firearms in private hands in the United States, many of these weapons are no longer wanted. However, they still pose a risk of being stolen or used in a moment of crisis or an unintentional shooting. Guns to Gardens provides a safe, anonymous way for individuals to responsibly dispose of unwanted guns without returning them to the gun market where they could do harm.

Gratitude for this service is often the primary response of gun owners. As Mary Smarr, one of the leaders of the Dec. 3 event at Oakhurst Presbyterian Church in Decatur, Georgia, put it, “It was a good day. People were just so relieved to get rid of these guns.”

“Our nation is traumatized by gun violence,” says the Rev. Deanna Hollas, the PPF’s Coordinator of the Gun Violence Prevention Ministry. “The church has a calling to help heal the nation. That is what Guns to Gardens is all about — transforming guns into tools for life and also transforming ourselves, seeking healing and hope.” Hollas is encouraged by the action of the 225th General Assembly (2022) when it voted to become the first denomination to support the Guns to Gardens movement.

The next nationwide Guns to Gardens Safe Surrender Day will be in mid-June, though many congregations and communities will hold events during the season of Lent and throughout the year. To learn more about gun violence prevention, go here.

Founded in 1944, the Presbyterian Peace fellowship is an independent nationwide community of Presbyterians who follow the example of the nonviolent Christ to find alternatives to violence, war and exploitation. For more information, go here or here or here.

God, thank you for your steadfast love through the years. As we continue our journey into the future in which you await us, may we always remember that we are preparing for lives as servant-leaders, going into a world hungry for hope and assurances of salvation, which are found in Jesus, whose story we are called to share. Amen.