Guns to Gardens event results in the disabling of 28 weapons 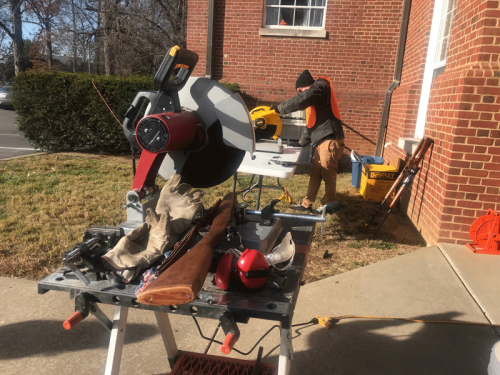 A recent Guns to Gardens event in Louisville resulted in 28 guns being dismantled. (Photo by Mike Ferguson)

It took a village for churches and other organizations in Louisville to pull off a recent Guns to Gardens event, including the village blacksmith.

Craig Kaviar, a Louisville blacksmith who owns Craig Kaviar Forge, was among the dozen or so volunteers to accept unwanted weapons and cut them into manageable sizes. It’s now Kaviar’s task to take the parts from the 28 disabled weapons and forge them into garden tools and jewelry.

“It’s amazing the group got this organized,” Kaviar said during the two-hour event held at Douglass Boulevard Christian Church, noting that state laws in Kentucky “are not favorable for this kind of event.”

“I like the idea of turning swords into plowshares,” said Kaviar, who worships at The Temple, a Jewish synagogue in Louisville. In his shop, Kaviar utilizes several tools originally designed for warfare, including a power hammer that was once part of a battleship and a press from an ammunition plant.

During the event, volunteers greeted people in their vehicles, explaining the process and answering questions.

“Any opportunity to offer people a safe way to surrender their weapons is definitely important,” said Ashia Stoess, director of Family Ministry and Community Engagement at Pewee Valley Presbyterian Church. “It’s inspiring to see a group of people from different churches make that happen.”

Early on during the event, Stoess said the event could benefit people who inherited a gun or perhaps those who once used a weapon for hunting but no longer had a safe way to store it.

Crescent Hill Presbyterian Church’s Eva Stimson, one of the organizers, said churches contributed both volunteers and financial resources toward the event. Mid-Kentucky Presbytery also provided a financial donation. A group formed in a Crescent Hill Sunday school class expanded to include members of Baptist and Unitarian congregations. Douglass Boulevard Christian Church, a Disciples of Christ congregation, hosted the Guns to Gardens event. 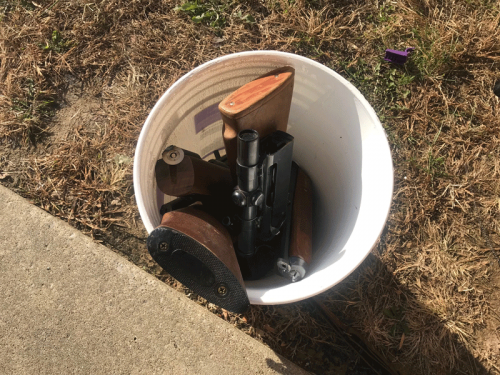 Craig Kaviar, a Louisville blacksmith, plans to turn the gun parts into garden tools and jewelry. (Photo by Mike Ferguson)

“We have tried to earn the reputation as a place that says, ‘Sure. Let’s figure it out,’” said Douglass Boulevard’s pastor, the Rev. Dr. Derek Penwell. He called gun violence “among the most visible and scary issues” that residents face.

Presbyterian Peace Fellowship has been spearheading Guns to Gardens events across the country. “Guns to Gardens is an outdoor drive-through event,” said PPF’s the Rev. Jan Orr-Harter.

Another event in Tulsa resulted in 57 guns, including an assault-style weapon, being dismantled. More events were planned, said PPF’s the Rev. Deanna Hollas.

Chartrael Hall, a minister at Quinn Chapel AME Church in Louisville and a former GOP candidate for Louisville mayor, called the event “a productive way to get weapons off the streets.”

He’d just been talking to a man who turned in two rifles he’d inherited from his father because the man’s children didn’t want to learn to shoot them. The man figured he could sell the rifles or pawn them, “and then he heard about this and thought it was a good cause,” Hall said.

In his neighborhood and around Louisville, “there is a numbness” about gun violence, Hall said. “You expect to hear shots. … Parents are fearful of letting their children walk to the store. It’s not in just one area — it’s a city problem,” Hall said. “I don’t know how to fix this except through power and presence and continuing to spread the message.”

During his mayoral campaign, Hall said he heard from a number of Louisville Metro Police Department officers that being routinely shorthanded has given officers an additional workload which has increased their concerns about mental health. “A lot of officers expressed [those] frustrations when I was running for mayor,” Hall said.

When Leon Lewis and Kita Rodriguez worship, it’s at Grace Hope Presbyterian Church in Louisville. “Gun use is situational,” Lewis said. “People get into an argument, the conflict escalates, and pride and ego can get in the way,” after which weapons are sometimes displayed or, tragically, used.

Almighty God, give us grace that your knowledge may become ours. May we grow in faith and bear fruit worthy of your people, living and growing in the Holy Spirit, both now and forevermore. Amen!