‘Nobody is beyond resurrection’ 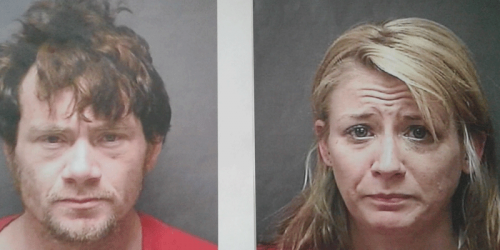 The mugshots of Kevin and Danielle Riley following their arrests. (Contributed photos)

Before Kevin Riley got clean and sober, he found himself at the former site of Trinity Presbyterian Church, which is now home to a nondenominational church in Sedro Wooley, Washington, a town about an hour north of Seattle.

“The deacons cared for me in ways no church had before,” he said.

Church leaders put a cot underneath the windows where he slept at night — and even ran power outside those windows so he could have heat to his heating pad.

But according to Danielle Riley, their life together was coming apart.

“It really was a hopeless feeling,” she said. “I don’t think we ever got suicidal, but I wouldn’t have minded if my life ended.”

One day Kevin told Danielle he’d said a prayer asking God to somehow remove her from their situation. That day she got arrested and spent three months in jail, pregnant with their first child. 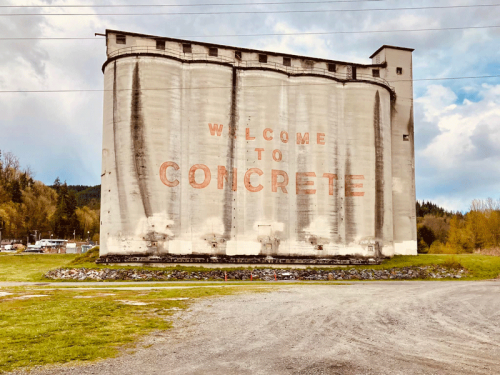 Concrete is a town of 915 people in the Skagit Valley. (Photo by Mike Fitzer/Film 180)

“I was praying to God to change everything because I didn’t know how to do it,” she said.

It took Kevin a good month after Danielle was incarcerated to decide that he needed to get clean. During this time, he found himself behind a little church in Burlington, a short drive from Sedro Wooley. On the hill was a cross known as the Burlington Hill cross. For Kevin, that cross symbolized refuge. Growing up he got that message from his grandmother, who was a devout Catholic.

Being there at night, as he tried to sleep, a train would come by.

“The way my drug-addicted brain worked, that was the sound of God’s trumpet coming to scare away all the evil I had done,” he said.

While in jail, Danielle went to a Bible study for women and led by pastors from a 1001 new worshiping community, Tierra Nueva, which is a ministry of the Northwest Coast Presbytery. When Danielle got out of jail, she and Kevin made Tierra Nueva their home church community.

At the time, Mount Baker Presbyterian Church in Concrete, about a half-hour east of Burlington, was without a pastor. Knowing that Kevin was interested in receiving training as a pastor, Tierra Nueva founder Bob Ekblad asked the congregation, which was down to less than a dozen people, if Kevin could preach one Sunday.

For Anne Bussiere, who helped Mount Baker become a Matthew 25 church, Kevin’s heart and the message he brought in left the congregation feeling that he was “really moving with the Spirit.” So, leaders at the church kept inviting him back to preach. 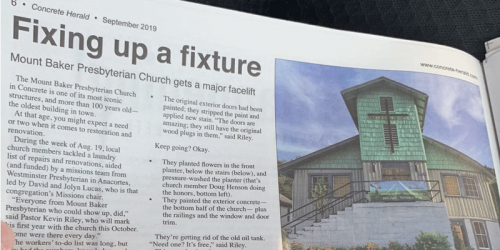 When he became a commissioned lay pastor at Mount Baker Presbyterian Church, the first thing Kevin Riley did was have the congregation clean the church from the inside out as a way of increasing the church’s footprint in the community.

“Having pastors that have been out of seminary, they’ve never experienced homelessness and drug addiction,” she said. “So, a lot of the Scriptures we’ve heard over and over all of a sudden had a new light to them, because they were told from a different viewpoint.”

Once Kevin received commissioned lay pastor training, he was ordained and installed to serve the church.

“I asked them all what is the plan for your church,” Kevin said. “One of the ladies looked at me and said, ‘Well that’s why we hired you.’”

That’s when Kevin cast a vision for the congregation, to clean the church from the inside out and then increase its footprint in the community.

The addiction and poverty that he encounters now as a pastor in Concrete is a lot like what he experienced, both living in addiction and how he grew up. He says it’s strange to be stepping back into something he escaped, now trying to help others escape as well.

“Every one of us is broken and we all need Jesus. Some of us just manifest our brokenness in different ways. Just because somebody’s homeless and addicted doesn’t mean they’re more broken than you are,” he said.

Danielle Riley, who is a part-time pastor for children and family ministries at Mount Baker Presbyterian Church, says they believe that addiction is a disease of loneliness, and that people just need community to heal from what is a symptom of trauma.

“Nobody is beyond resurrection,” she said. “It can happen to us. It can be anybody.”

Our Father in heaven, may we find courage and comfort in the daily reminder that you are a God who assures his children: “Do not fear, for I have redeemed you; I have called you by name; you are mine. When you pass through the waters, I will be with you; and through the rivers they shall not overwhelm you” (Isaiah 43:1—2). In Christ’s name. Amen.