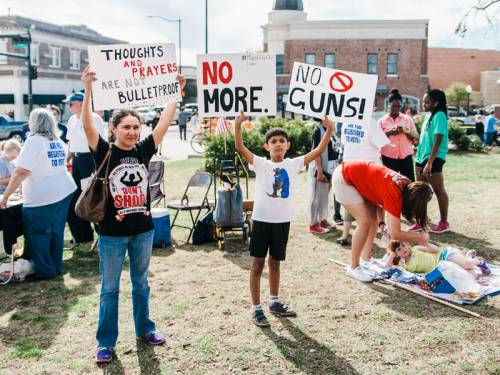 The Presbyterian Church (U.S.A.) has a long history of support for gun control legislation. Beginning in the late 1960s, in response to the assassinations of public leaders, the General Assembly called for “… control [of] the sale and possession of fire arms of all kinds.”(1) In 1976 this statement was reaffirmed, but also specifically worded to “… not cover shotguns and rifles used legitimately by sportsmen …”(2) In 1988 these and other statements supporting gun control were again reaffirmed.

A fuller statement was approved in 1990. In it the General Assembly went on record as:

Support[ing] gun control at federal, state, and local levels as the most effective response to the present crisis of gun violence …

Call[ing] upon the United States government to establish meaningful and effective federal legislation to regulate the importation, manufacture, sale, and possession of guns and ammunition by the general public. Such legislation should include provisions for the registration and licensing of gun purchasers and owners, appropriate background investigations and waiting periods prior to gun purchase, and regulation of subsequent sale.

Urg[ing] the enactment of similar state and local laws, should such federal legislation be delayed.

Call[ing] upon government agencies at all levels to provide significant assistance to victims of gun violence and their families.(3)

In 1998, the General Assembly added to its policy by calling on all Presbyterians to:

intentionally work toward removing handguns and assault weapons from our homes and our communities; and

In 2000, the General Assembly reaffirmed the church’s commitment to gun control and called for strengthening gun ownership legislation.(5)

In 2008, the General Assembly approved pastoral recommendations urging that:

all persons buying guns at gun shows undergo a background check to close the gun show loophole in 35 states;

ban the sale and possession of large ammunition magazines and assault weapons that have no redeemable social purpose, and cannot legitimately be termed “sporting guns”;

support the introduction of new technologies, such as micro-stamping in which identifying information from a gun is transferred onto bullet cartridges, which allow law enforcement to more easily trace guns and solve crimes; and

stop illegal arms sales by the United States and others.(6)

The 219th General Assembly (2010) adopted the resolution, “Gun Violence, Gospel Values: Mobilizing in Response to God’s Call,” in exercise of its responsibility to help the whole church address matters of “social righteousness.” As a social witness policy statement, it is presented for the guidance and edification of both church and society, and determines procedures and program for the ministries and staff of the General Assembly. It is recommended for consideration and study by sessions, presbyteries, and synods, and commended to the free Christian conscience of all congregations and members for prayerful study, dialogue, and action.(7)