A “peace movement” is taking place throughout Mid-Kentucky Presbytery. Its origins are found in Scripture for sure, but the movement has gained momentum largely in response to COVID-19. To keep people safely distanced, a number of Mid-Kentucky Presbytery congregations have learned and practice American Sign Language (ASL) as they pass the peace. As someone with a Deaf son-in-law, the use of ASL in so many congregations delights me and provides me with additional practice as I learn and hopefully one day may become a proficient signer. 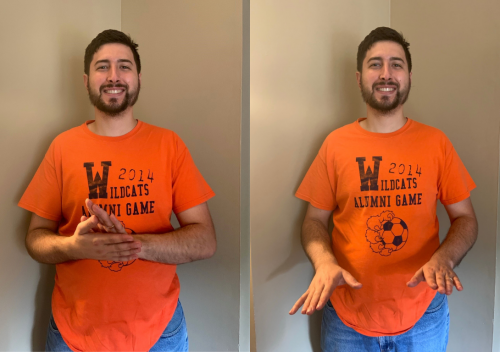 In my ASL studies so far, I have learned that there are two types of signs — those that are static and require no motion and those that require movement. The ASL sign for “peace” is a movement sign. “Peace” involves the palms of the hands touching, then rotating in opposite directions as if they were getting all twisted up, and at last pulling the “twisted” palms apart and smoothing everything out as the hands — palms down — move away from each other. As I have been wringing out and then smoothing out my palms as I pass the peace in many Mid-Kentucky congregations, the wisdom of ASL struck me. ASL speakers cannot say “peace” without “making peace.” Peace is a movement. Learn how to sign “peace.”

As a non-ASL speaker, when I use the word “peace,” I most often think of it as a static word, a word that doesn’t involve action. I think of peace as being the absence of overt conflict or violence. A ceasefire in Israel/Palestine is negative peace, for instance, or in congregational life, peace may exist when all expressions of disagreement or conflict are suppressed. Members put on their “happy, church” faces, pretend to get along, and avoid raising uncomfortable or difficult subjects for fear of angering one another. Peace is static.

ASL is convicting me that I need to alter my understanding. Peace is not a static thing. Peace is a movement that can only be realized when there is active engagement. Jesus says, “Blessed are the peacemakers,” not “Blessed are the peace-be-ers.” ASL, like Jesus and the biblical concept of shalom, understands that for peace to exist it must be “made.” Making peace requires that every person is acknowledged and feels valued. Making peace involves creating the conditions in which each person is in a right relationship between other people. Peace is not so much the absence of conflict, but an esprit de corps also exists. People are motivated by each other and strive for excellence. A balanced blend of personal, internal competition (How can I improve?) and external cooperation (How can I help the other person do better?) predominates. Peace requires engagement, interaction, getting all twisted up and finding the muscle memory to smooth things out again. Peace is a movement.

The Presbyterian Church (U.S.A.) is currently in a Season of Peace that continues through World Communion Sunday (Oct. 3). It is a time for individual believers and congregations to learn a lesson from ASL, from our faith, and to express peace as a movement, not just settle for tamping down hostility and celebrating a static concept, but to express and make peace through actions that build respect, empathy, cooperation and community. It is a time to become peacemakers and experience the difference that comes through actively seeking peace, and relentlessly pursuing it.

Let me encourage you to consider initiating the following activities during this season of peace:
•          Invite someone you don’t know well or who has alternate beliefs than you for a meal.
•          Read and implement Guidelines for Presbyterians During Times of Disagreement
•          Identify a hands-on project to be funded by the congregation’s portion of the Peace & Global Witness Offering, a special offering to be received on World Communion Sunday.

And remember that in ASL, as in faith, practice makes proficiency.