When Payday is Not Promised

Narciso, Feliciano, and Alberto labored hard on a construction project in the hot Arizona sun for several days. Though the work was demanding, the promise of payday kept these day laborers going. They had cupboards to fill and bills to pay.

But payday presented an unwelcome surprise for these men. They were paid for just one day of work, leaving each of them about $300 short. They felt demoralized and helpless, but they did not have to suffer in silence thanks to the Southside Worker Center in Tucson, a ministry supported by One Great Hour of Sharing gifts.

Several members from Southside Presbyterian Church, which sponsors the worker center, and other advocates went to the job site and protested the treatment that the workers received. The workers were eventually paid through the intervention of the legal clinic at the University of Arizona’s law school. 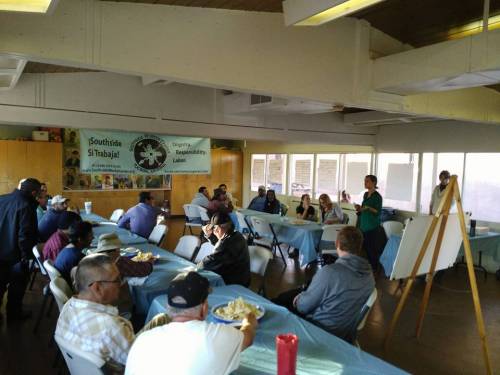 The Southside Worker Center began in 2006 after workers expressed a need for a safe place to connect with employers, says Jimmy Wells, a board member. “It is workers organizing themselves with the support of the church,” he says. “It really doesn’t work unless the workers take leadership in the center.”

Many workers have had limited opportunities to lead, but thanks to One Great Hour of Sharing gifts, workers have honed the skills necessary to manage the center. Using offering gifts, the Presbyterian Committee on Self-Development of People (SDOP) supported a Leadership Academy.

The Leadership Academy prepares workers to guide the center’s initiatives related to wage theft, fair wages, and safety. Some eventually become members of the worker center’s board.

“The Leadership Academy helps us identify key leaders who form the core of the work we do,” Jimmy says. “Without the support [from One Great Hour of Sharing], I don’t think we would have been able to do that.”

SDOP’s focus is consistent with the center’s ethos: promoting justice and building stronger communities. “I really appreciate that the support is not about charity, about people doing things for other people,” Jimmy explains. “It is much more about how we can create space and opportunity for people in marginalized places.”

Members of Southside Presbyterian are examples of serving the most vulnerable we have been called to stand with and to serve outside the church doors. They have shown the way, but the gifts of Presbyterians to One Great Hour of Sharing have helped provide the means. Let us all walk out our doors to repair the breach created by injustice.

Jesus, you preached that the laborers deserve to be paid. Help us to open our doors to give and serve those who are mistreated and go unpaid for their work. As the prophet Isaiah promised, may you be the vindicator that goes before us, and may your glory be our rear guard. Amen.

For more information and resources related to the One Great Hour of Sharing offering, visit presbyterianmission.org/oghs .
This post is based on the minute for mission script which can be found on our website as a script.