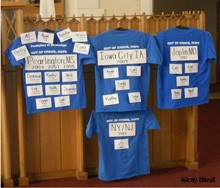 The first Sunday in Lent (March 9, 2014) has been designated “Wear your blue t-shirt to church Sunday” as a testament of one of the ways One Great Hour of Sharing makes a difference.

Disaster after disaster, Presbyterians have responded in record numbers with prayers, financial gifts, and hands-on-experience.  Over the last 9 years, more than 70,000 volunteer missions have been served in the U.S. Gulf Coast, Iowa, Missouri, Alabama, Tennessee, Texas, New Jersey, New York, and other places where natural disasters have occurred. Many volunteers have put on blue PDA t-shirts and worked shoulder-to-shoulder to live out Christ’s call to serve their neighbors in need.

Members from the First Presbyterian Church of Battle Creek, Michigan, are a part of the great company of servants.  Their photo, which appeared in a recent PDA Mission Mosaic, shows evidence of their multiple years and locations of service.

Won’t your team wear their shirts this year on March 9, then share your photo so that the story goes on?