Global partners persist in the face of chaos 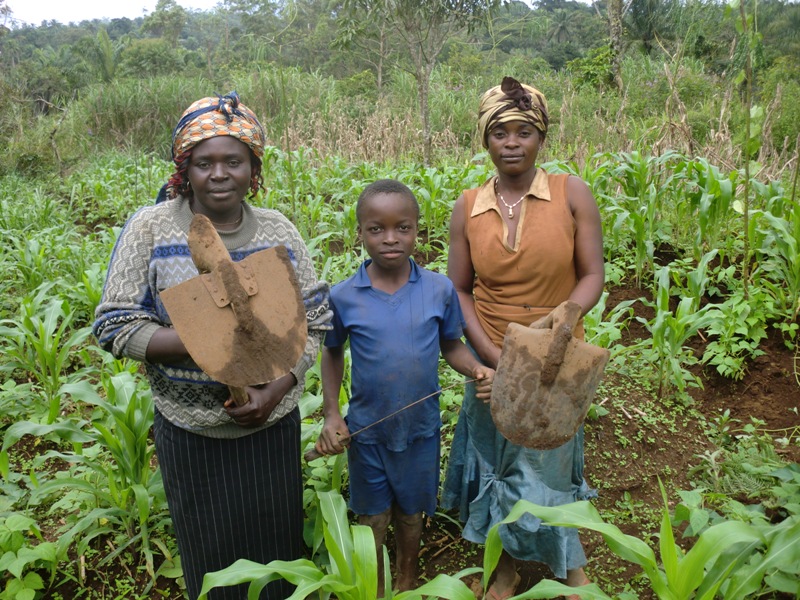 A family of farmers in the North West Region of Cameroon. Photo courtesy of CISEGD.

A few months into 2022, and looking back through 2021, the world has been affected by so many crises, each of them impacting people and the planet in unprecedented ways. But working with incredible partners in the middle of endless chaos is truly a gift and a blessing.

Everyone across the globe has been impacted by the Covid-19 pandemic. People have lost loved ones, employment, time in school, and social connections. However, while we all have experienced the hardships of the pandemic on some level, some populations have had a greater burden. Due in large part to racialized poverty and unequal access to healthcare, Black, Indigenous, and people of color (BIPOC) have experienced the highest death rates from Covid-19 in the U.S. And the Covid-19 death toll has been four times higher in lower-income countries than rich ones due in large part to unequal access to vaccines, tests, and treatments thanks to a lack of financial resources and World Trade Organization intellectual property rights protections for pharmaceutical companies.

Covid-19 has worsened the debt crisis for lower and middle-income countries with the massive expenses incurred managing the pandemic, reduced revenues, and high interest payments which continue to undermine social spending.

Despite the hardships, we have seen through the Presbyterian Hunger Program’s (PHP) international partners, that the pandemic has helped ignite a revitalization of Indigenous and traditional knowledge and ways of relating to the land and community. We have witnessed communities, cut off from markets due to lockdowns, return to practices of producing their own food through agroecological methods and growing medicinal plants to improve health and immunity. We have also witnessed our partners demonstrate solidarity with struggling families by sharing seeds and food. 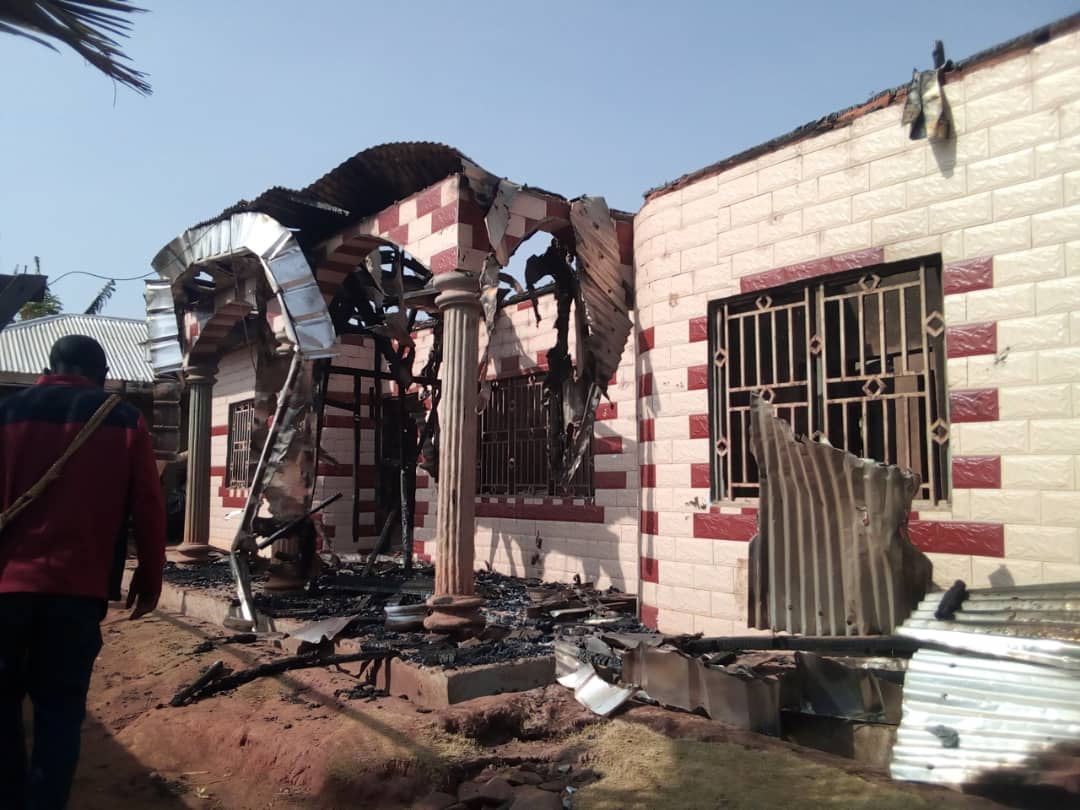 With all eyes are on Ukraine as Russia continues to devastate cities with military violence, we need to be reminded that Ukraine is unfortunately just one of many places where we see trends towards militarism, authoritarianism, conflict, and displacement emerging.

On January 6, 2021, a mob of far-right extremists and militia member groups stormed the U.S. capitol and attempted to overturn the U.S. Presidential election results. In February 2021, the Myanmar military took control of the government of Myanmar in a coup d’état. There were four successful military takeovers in Africa in 2021: Chad, Mali, Guinea, and Sudan, and several other failed coup attempts. Haiti’s President was assassinated in July of 2021. In May of 2021, all U.S. forces chaotically withdrew from Afghanistan after 20 years of war and then imposed crippling economic sanctions on the country, leaving millions on the brink of starvation. Saudi Arabia has waged war on the Houthis in Yemen for the past 7 years with U.S. military intelligence and weapons assistance until this past year when the U.S. ended support for offensive operations. 16.2 million Yeminis are at risk of starvation and 4.2 million are internally displaced. Cameroon has faced armed conflict between separatists and government forces in the English speaking North West and South West Regions since 2017. Boko Haram has been attacking villages in the Far North Sahel Region since 2012. And in the East Region, there have been attacks from rebels operating in neighboring Central African Republic. There are 937,000 internally displaced persons in Cameroon.

There are so many cases that remain unnamed here. It can be really overwhelming to think about all the insecurity and violence in the world, and to think of the role that the U.S. plays in the destabilization and conflict in other nations.

Despite these harmful trends, partners like RELUFA in Cameroon continue to demonstrate courage to continue to support communities in conflict vulnerable zones with democratic food systems in the form of cereal banking and training in income-generating activities as well as advocating for an end to the conflicts there. Our partners CISCOPE in Nigeria and Hope Restoration South Sudan help people recover their food production and livelihoods after losing everything to violent conflict. Our partner Improvement and Development for Communities Center in Palestine has assisted farmers in the Gaza Strip to rebuild their greenhouses after they have been destroyed by the war. 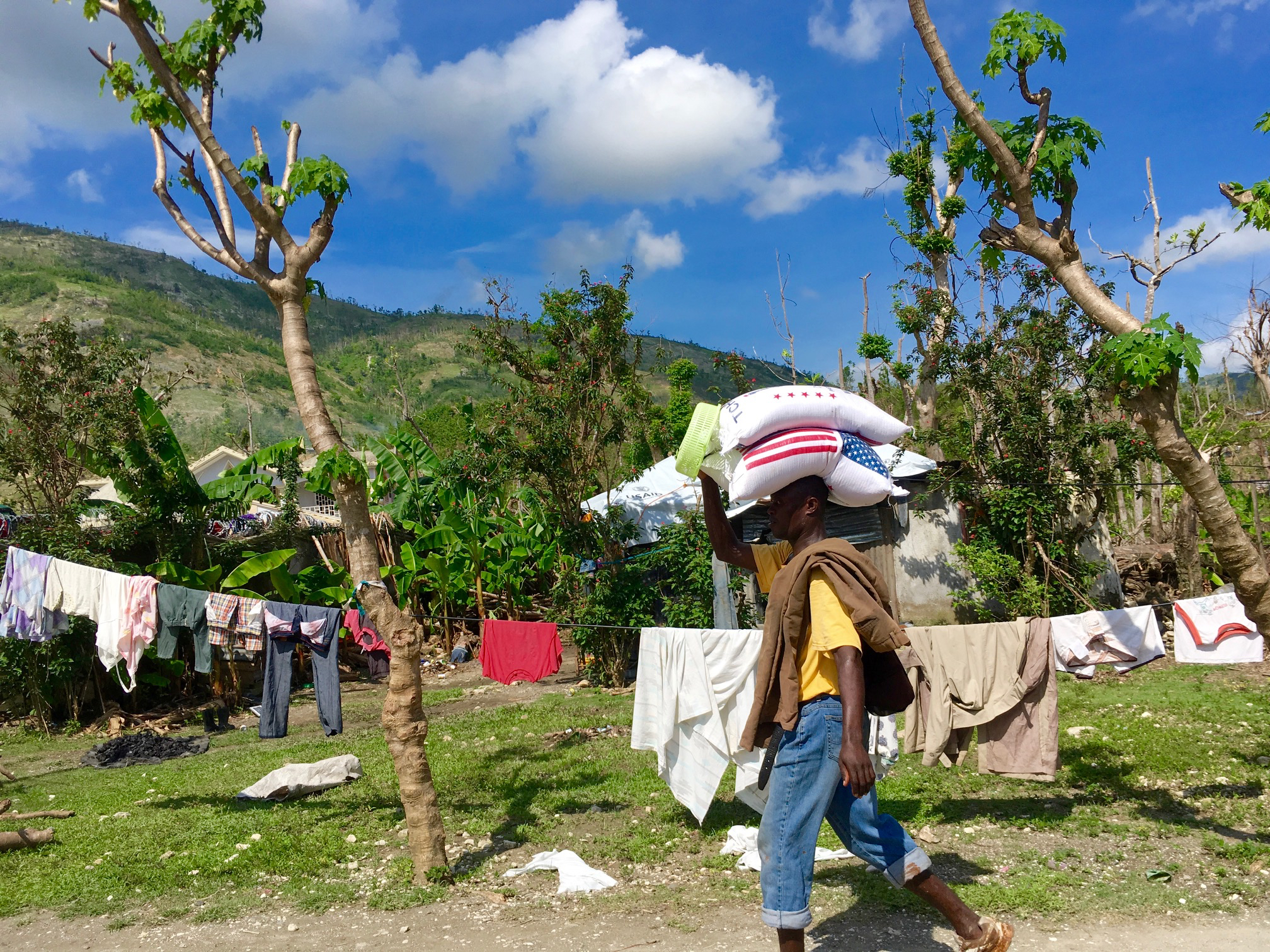 A man carries bags of rice six weeks after Hurricane Matthew devastated much of the southern coast of Haiti in October 2016. Food imports, natural disasters, forced displacement and government corruption all contribute to the country’s deep poverty. Photo by Cindy Corell

In early February, 2022, before Russia invaded Ukraine, global food prices were on a historic rise due to global supply chain, adverse weather, and rising energy prices. According to the U.N. Food and Agriculture Organization (FAO), February food prices rose to an all-time high. The FAO Food Price Index (FFPI) averaged 140.7 points in February 2022, up 5.3 points (3.9 percent) from January and as much as 24.1 points (20.7 percent) above its level a year ago. And March is expected to be even worse, because over the past couple of weeks, food and energy prices and general inflation have skyrocketed globally since both Ukraine and Russia are important wheat producers, as well as producers of other food goods, and Russia is a major oil and gas producer.

We know that emerging market countries and lower-income countries are more vulnerable to food price hikes since their citizens spend a relatively large proportion of their income on food. There are currently 47 countries (36 located in Africa) which are considered Low-Income Food-Deficit Countries and rely on food imports which makes them especially vulnerable to fluctuations in global food prices. The World Bank estimated in their “Global Economic Prospects” report (June 2021) that 100 million people in emerging market and developing economies would have “fallen back into extreme poverty” by the end the last year.

Thanks to the Green Revolution, agriculture systems around the world are reliant on expensive foreign inputs: hybrid and genetically modified seeds, chemical pesticides, herbicides, and fertilizers. This dependence on foreign inputs for food production also renders countries vulnerable to market fluctuations, in particular the spikes happening with energy prices, which will directly affect the pricing of chemical pesticides, herbicides, and fertilizers made from oil derivatives, but also the increasing oil prices will make the transportation of those goods even more expensive.

These conditions remind us again of the importance of food sovereignty and land rights. When people have agency over their food production, they can determine their own food and agricultural systems, and produce and consume food in accordance with their cultural traditions, in reciprocity with nature. And real food sovereignty insulates people from the volatility of the market because there is very little dependence on the market for food. This is why PHP, through its partners like ARUMES in El Salvador, Asofenix in Nicaragua, and MPP in Haiti, promotes agroecology and food sovereignty. When communities save and share seeds, they don’t depend on expensive inputs. When communities initiate cereal banks, they can shield themselves from harmful price speculation. When communities implement small kitchen gardens, families can continue to have affordable food, close to home. 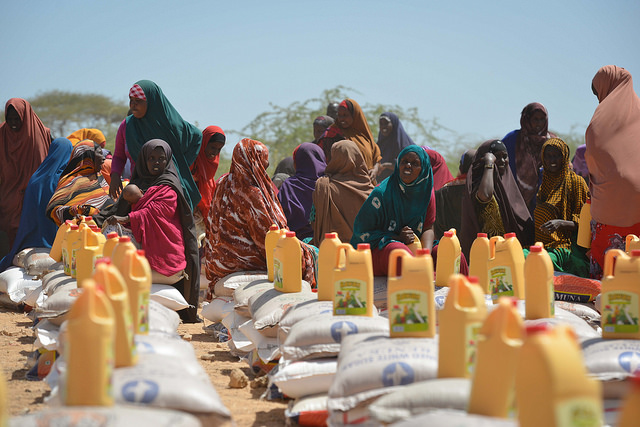 Distribution of food and cooking oil in Somalia. Photo Courtesy of Kaalmo Relief and Development.

We know that climate change disproportionately impacts lower-income countries, despite contributing minimal carbon emissions compared with advanced industrial economies. People living in poverty have increased exposure and vulnerability to climate change. If the large carbon emitters continue to take minimal effort to course correct on climate change, the World Bank estimates that 130 million people could be pushed into poverty over the next 10 years and 200 million people could be forced to migrate within their own countries by 2050.

According to the U.N., drought is poised to be “the next pandemic.” Southern Madagascar has suffered from widespread deforestation and successive years of excessive drought which could result in the world’s first climate change famine – 1.5 million people (half the population of the region) are facing extreme food insecurity.

South Sudan continues to suffer from drought followed by excessive rainfall and flooding. South Sudan saw its worst flooding in 60 years in 2021, with some describing the flooding as biblical, impacting more than 850,000 people. The flooding is further complicating life for the South Sudanese who already face violent conflict, Covid-19, and extreme hunger.

Somalia is experiencing its worst drought in a decade. A massive displacement of up to 1.4 million people could result due to life-threatening food and water shortages. A famine was declared in Somalia in 2017 and current conditions are unfortunately ripe for another famine.

There are so many places facing these same conditions that yet again we find ourselves overwhelmed by the scale. But PHP has partners in many areas faced with these difficult conditions. Our partners like the Pacific Conference of Churches in Fiji, CEDEPCA in Guatemala, Kaalmo Relief and Development in Somalia, and Hope Restoration South Sudan continue to assist farmers in the replanting of their fields after they have been devastated by flooding or drought or both. Our partners teach farmers how to collect rainwater and wastewater to water their gardens and farms. And many of our partners incorporate agroforestry practices which protect the land from erosion and improve biodiversity. They also practice agroecology, which results in soil carbon sequestration. 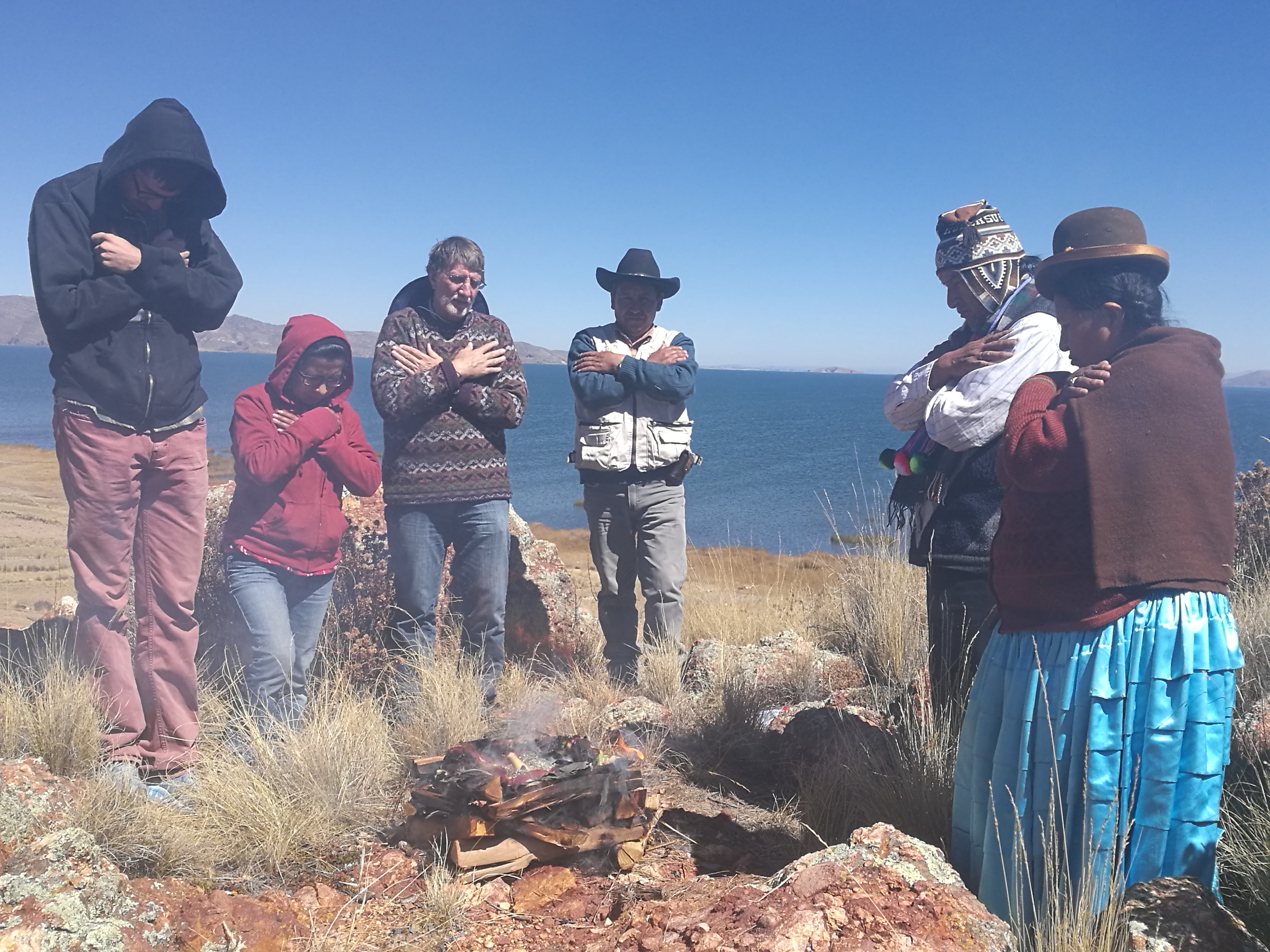 Joining in community, we gather to pray for the healing of God’s Creation and that we may live in harmony with it. Photo by Chenoa Stock.

A Call to Solidarity and Action

All the crises facing the world can be very overwhelming and can leave many of us feeling that there is no way out. The planet we inhabit belongs to all of us, and what happens in one part of the world, whether close or far away, affects us all. Global solidarity is the glue that should bring us together and help us see one another. Our partners continue to teach us, in the most stressing times, to persist, and to continue to help others and ask ourselves who are our neighbors, and what are we called to do.

Here are some things that we can do now:

Pray.  Pray for those who are suffering the most from insecurity, conflict, and hunger.

Give. You can support the work of PHP’s partners through gifts to the One Great Hour of Sharing.

Valery Nodem, PHP staff, made important contributions to this article