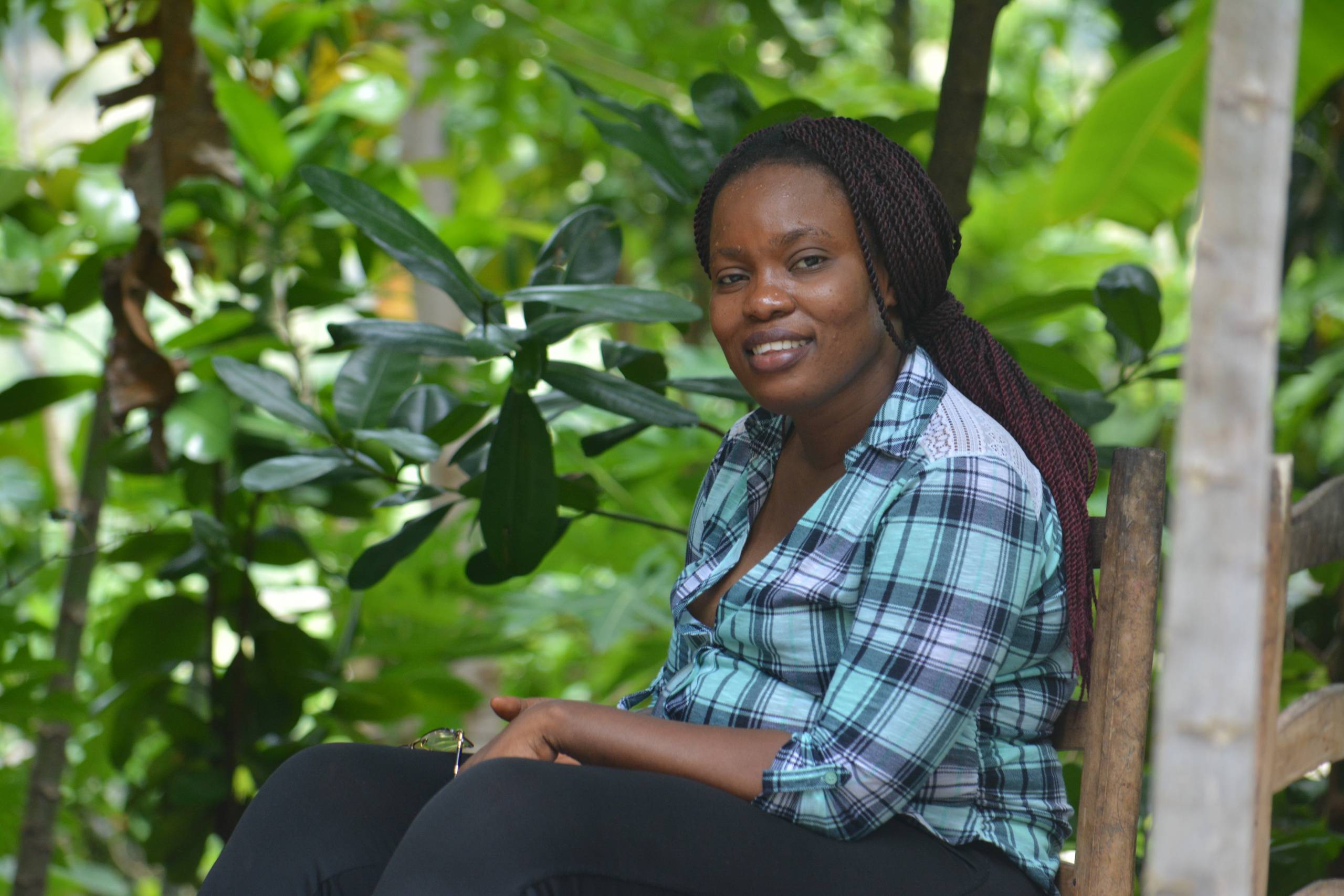 Cindy Corell is the Mission Co-worker for Haiti who accompanies FONDAMA, the Joining Hands network there. Cindy is currently accompanying FONDAMA from Virginia due to the pandemic and continued insecurity in the country. She interviewed Fabienne Jean, the Coordinator of FONDAMA, in order to help us gain a glimpse into the everyday trauma that Haitians are experiencing with growing insecurity, violence, and poverty in the country.

Cindy Corell: We understand that the people of Haiti have struggled under a number of crises for several years. Can you help us understand the various crises with a bit of background?

Fabienne Jean: For the past 30 years, Haiti is a country without a leader. The president does not lead the country so the people can improve the condition of their life. The big problem is hunger because the country depends on imported food, we have lost the essential foods we produce. It has changed the way people eat.

Also, the distribution of wealth in the country is a big problem.

All these issues intensified after the earthquake of Jan. 12, 2010. The population has become poorer and the corruption is growing. Leaders of the country use money that is for the population and do not care about the well-being of the people.

As a result, the people take to the streets to protest and ask for a better life, an opportunity to make a better living.

The problems are political, social and economic because the entire country is controlled by a tiny group of people. There have been no efforts to help people find a job, go to school, even to have what is necessary to have a life.

For the past couple of years, the insecurity situation has worsened in a way we’ve never seen before. We all live with the fear that we do not know if we’re going to make it for the day. It’s like we are in our own cemetery. Today is your turn to die; tomorrow will be mine.

Gang members assassinate people every single day, they kidnap and murder people like it’s normal. People live with the fear that if I go out today, it’s going to probably be my last day on earth and I have to say goodbye to my family. That is the situation.

The gangs recruit young men and women living in the slums, and with the poverty they live under, they accept. They receive guns and money. 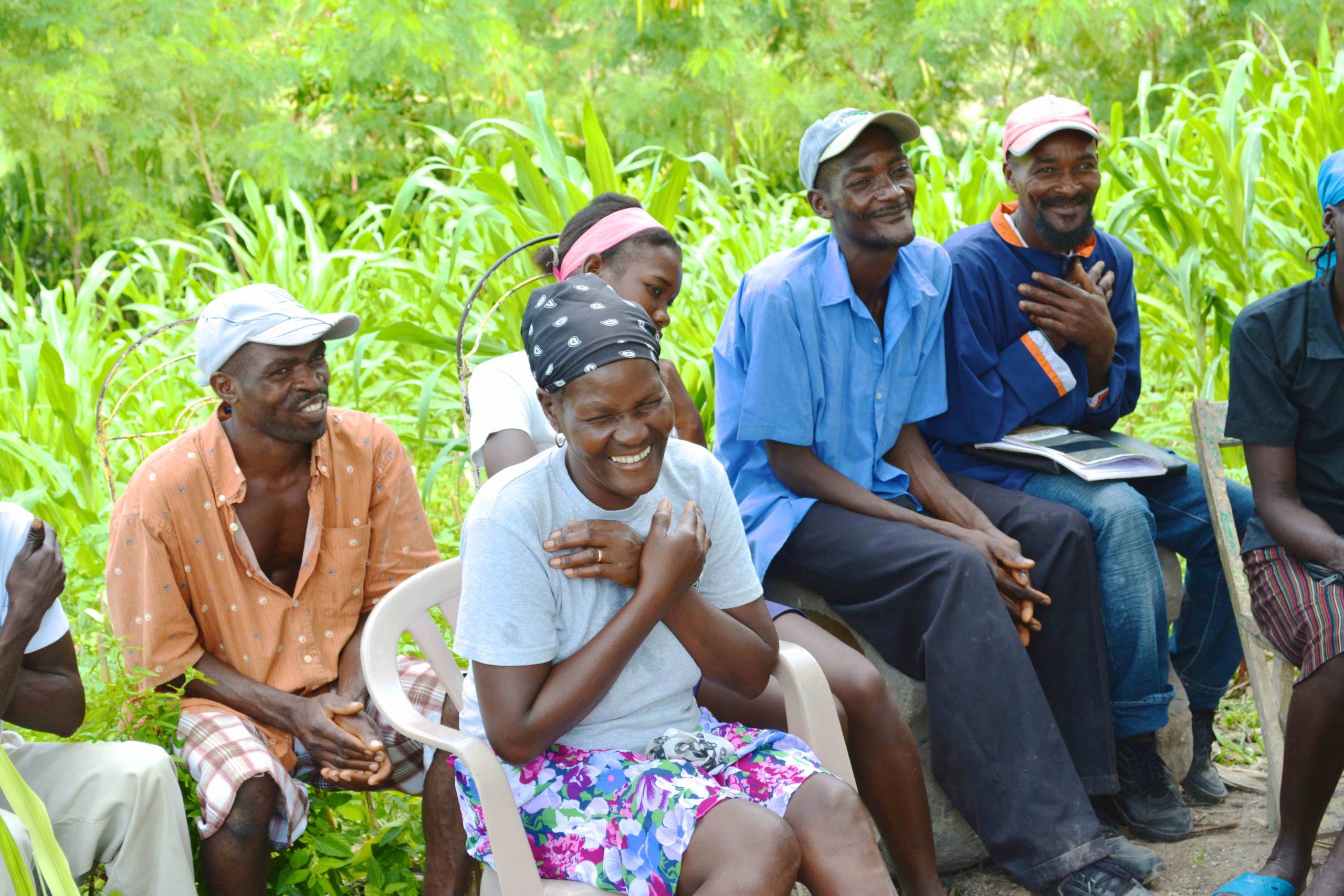 A woman laughs during a yard garden training program in Bayonnais, Haiti. Photo by Cindy Corell.

Cindy: Are the gangs protected by government officials?

Fabienne: In the in the beginning, gangs worked to protect the power of some elected officials. But what they are doing now is out of control. The officials supported them, and now the gangs operate on their own. The officials could not control them if they wanted to. They have no control over what they started.

Especially since the assassination of President Jovenel Moise in July 2021, it has gotten so much worse. Some schools must close because the gangs kidnap children. People cannot even leave their house. My sister-in-law had to leave her home because the gangs came to her and said they wanted her house as a headquarters. They gave her 24 hours to move out.

There is no negotiation.

It’s success when children can dream of growing up and seeing a future without hunger, without deprivation, without poverty.

Cindy: How are you and your family coping under all this stress?

Fabienne: It’s like we exist but we do not live.  We are paralyzed with fear that one of us will be kidnapped. Or my brother, who must go out to his job. And that’s what it’s like every morning. We must stay focused on the phone waiting for him to call and say, “I am in the building now.” And it is the same thing in the afternoon when he is going home.

We are sick of it because it’s difficult to go out to find something to eat or to go to see a doctor. My mom has high blood pressure, and with all the stress, she’s always sick.

This is not a life.

Cindy: With the number of kidnappings and criminal activity so high, are you hearing of any plans to bring security issues under control? If so, what are you hearing?

Fabienne: I have not heard about a formal plan to control the situation.

The fact is that the actual government does not care about the Haitian people, and the international community that calls for elections now, they do not care for the people either. It seems as if it is more important for the international community that the government prepares for an election – even though we cannot go out for food or healthcare or school or work without being killed – than to solve the problems.

Instead of finding a way to control the problem, they find what we call some cosmetic solutions. We have four departments (like regions) totally blocked by the gangs, but the government officials and NGOs and people with money – they just take an airplane or a boat or a helicopter to get where they need to go. They don’t care about the madam seras (women who sell food and goods on the streets). They don’t care about the people who need to go to their jobs every day and must walk or take public transportation on the roads. And that’s not to mention the thousands of people who have been displaced from their homes because of violence. 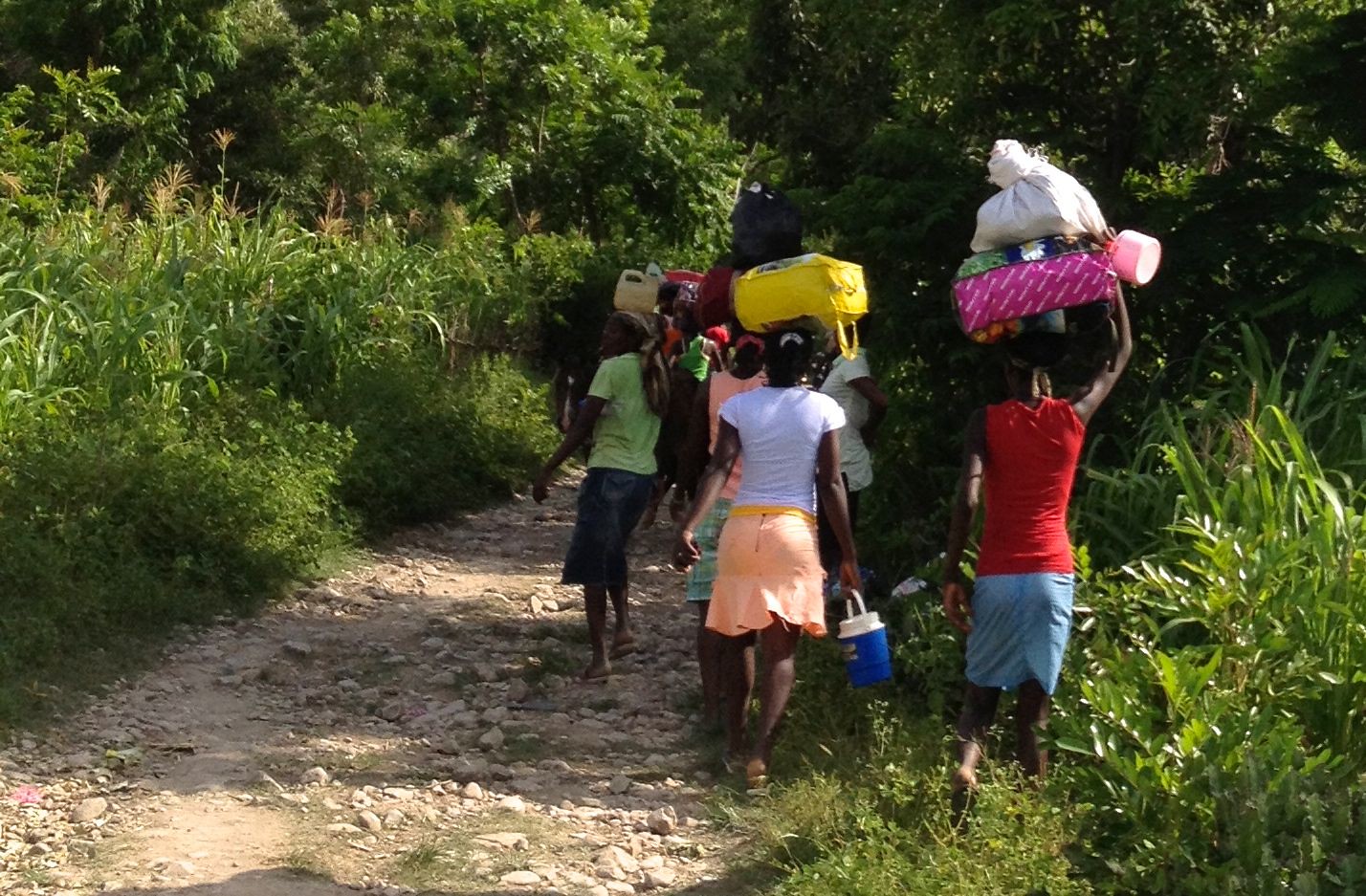 Cindy: We know that a Haitian-led solution to these crises is important to many in Haiti. What would this look like, and are there efforts to make this happen?

Fabienne: When we say “Haitian-led solutions” remember that since 1915 when the American (U.S.) occupation started, Haiti was no longer a sovereign nation. Stronger countries have told Haiti the way it should operate.

When we see what is happening after the U.S.-supported dictatorship of (François and his son Jean Claude) Duvalier, we can see that the majority of the problem that we have today is because our so-called friends were not acting in the best interests of our country.

One of the reasons Haiti ends up in crisis after crisis is because we are not able to look at the root cause of the problems, we are just given cosmetic solutions.

If you want to do something, please go deeper, go, and see what the problem at its root is.

We want to insure that all Haitian people have a word in what will be the future of Haiti.

Cindy: How is FONDAMA particularly and other civil society groups responding to the situation?

Fabienne: First of all, FONDAMA stays in close touch with the population. With all the crises, the problem of hunger is the hardest. So, we work for food sovereignty, so everyone has a chance to have food for their family. And we fight land-grabbing, which is prevalent in the countryside.

The fundamental thing is to work alongside all the other peasant organizations, to put our forces together to fight to bring better results for the Haitian people.

4G-Kontre is a peasant platform bringing together thousands of farmer organizations across Haiti. It represents millions of people. And through this collective, the peasants are represented in the Commission Searching for a Haitian-led Solution, also known as the Montana Accord.[i]

This puts us at the table, gives us a voice about the future of the country.

We want to insure that all Haitian people have a word in what will be the future of Haiti. 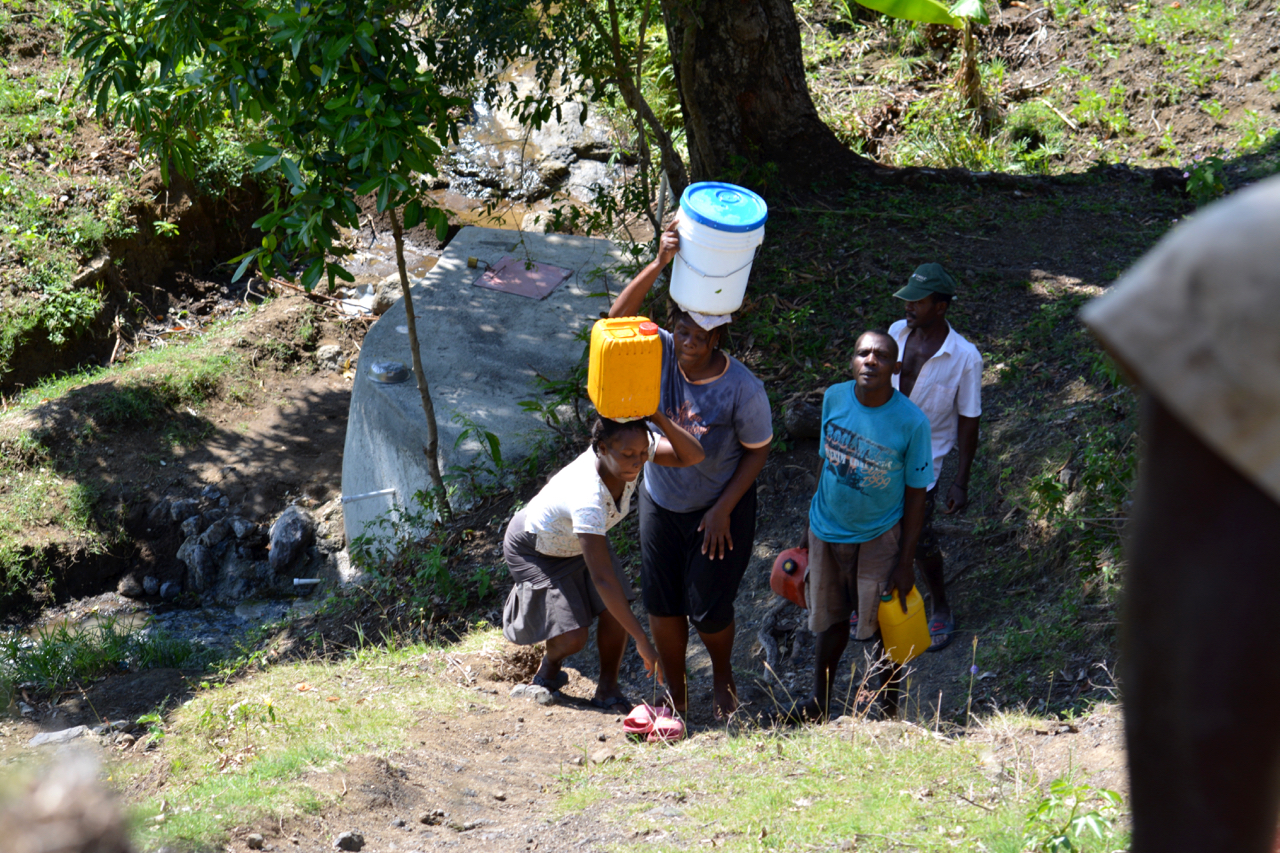 Cindy: What would success look like for the people of Haiti?

Fabienne: Success is when there is security for the people, when people can go about their life and have jobs to support their families. It’s success when the peasants can have land they can work, to grow food for the country to eat, to make their own livelihoods.

It’s success when children can go to school and people don’t have to struggle for health care.

It’s success when children can dream of growing up and seeing a future without hunger, without deprivation, without poverty.

Cindy: Where do you see hope in this right now?

Fabienne: I would like people to better understand what is happening in Haiti. And what is happening is very ugly: a country where every day at least five people are kidnapped, where you were afraid to go out to buy food, to buy water. A country where you can be sick and you are afraid to go to the hospital. I want people to understand the way that Haitian people live.

So, they will put their voices together to ask the Haitian government and other governments to give the Haitian people a chance to take the destiny back.

We still need your prayers. We really need prayers, but we also need you to work beside us, to call your Congress members. Let them know what is happening in Haiti.

We need more voices. We need to let the world know we do not have war in Haiti now, (but that is only) because the Haitian people do not have weapons. The way people are living is not humane.

[i] The Montana Accord is a commission started in March 2021 with representatives of civil society and various sectors of Haiti, including human rights, feminists, business, Protestant churches, vodou, political parties, peasant sector and diaspora. In August at the Hotel Montana, the group brought together hundreds of others to sign on to an accord, which has become known as the Montana Accord. From the consensus built across almost every sector in the country, the accord calls for a transitional government and a plan to work toward free and fair elections for a stable government.