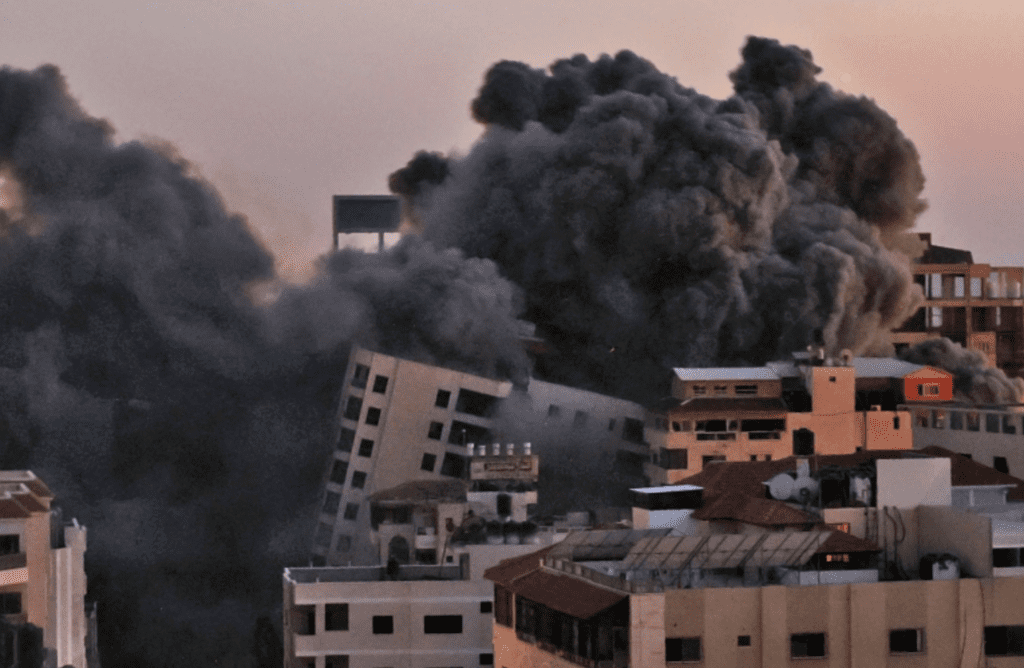 As Gazans bury their dead, smoke billows from an Israeli airstrike on the Hanadi compound in Gaza City, home to about 80 Gazan families (May 11, 2021). Israel-Palestinian News.

The Palestinians are welcoming Eid with strikes of death. Ramadan, the holy Month of Muslims, finished and Eid-al-Fitr arrived. However, Palestinians would not enjoy it as they should have because the Israeli occupation is bombing the people everywhere.

Everything started in Jerusalem. At first, the Israeli military decided to enter the holy Al Aqsa Mosque, which is a religious sacred site for Muslims all over the world, and to vacate it. The Palestinians in Jerusalem including the Christians refused such an act and protested by staying in the Mosque, refusing to leave it. The Israeli soldiers began to throw smoke bombs and tear gas into the Mosque to force them to leave, but the Palestinians still would not go.

At the same time, the Israeli occupation started forcing the citizens in Al Sheikh Jarrah neighborhood in Jerusalem to leave their homes, in another attempt to make a new Nakba[i] for the Palestinians.

The indigenous people in Al Jarrah refused to leave their houses, and they also resisted the
occupation All of these attacks sparked the revolution of the Palestinians everywhere to refuse these oppressions. The Gazans in response to these attacks defended themselves and their siblings in Jerusalem. This moved the attacks to Gaza, as Israel launched air raids on the Gaza Strip.

The Israeli occupation launched its horrible airstrikes all over the Gaza Strip, starting with Beit Hanoun North Gaza in particular and the middle of Gaza. These strikes resulted in the death and injury of dozens, including a large number of children, women and persons with disabilities, as well as the vast destruction of homes, properties and facilities.

Improvement & Development for Communities Center (IDCO), a non-profit development organization  in Gaza and partner of the Presbyterian Hunger Program, stresses that the occupation violates all international treaties, conventions, and the human rights system by committing these crimes and attacks on civilians and civilian infrastructure in the Gaza Strip, Jerusalem and the West Bank.

The civil defense in the Gaza strip recorded the martyrdom of three citizens in an Israeli strike that targeted a house to the west of Gaza city. Raed Al Dahshan, spokesperson of the civil defense, said to the Anadol agency, “Among the martyrs are a man and a woman of special needs.” He added, “We were able to find their bodies two hours after striking the house.”

The Israeli occupation, on the other hand, threatens today (Thursday May 13), that it will intensify the raids on the Gaza Strip. The spokesperson of the Israeli military said that his army will intensify its attacks during the coming 24 hours, and the military attack on the Strip will continue for days. About an hour ago, an apartment in a building in the middle of Gaza city was also targeted. The sounds of bombs and strikes can still be heard everywhere in the Gaza strip, mixed with the voices of children screaming out of fear.

The Improvement and Development for Communities Center (IDCO) calls on the international community, supporters and donors to take immediate and urgent action to stop the Israeli aggression on the “under attack areas” in Gaza Strip, and to secure international protection for Palestinian civilians.

IDCO calls for providing the elements of steadfastness for our people in the face of these attacks, including the tightening of the Israeli blockade and the closure of the crossings.
On the other hand and in response to the mentioned horrible situation described above, it’s strongly demanded to consider an immediate and urgent support to the victims and internally displaced persons (IDPs) such as delivering emergency medical devices to emergency departments at hospitals working in the conflict affected and no-go-zones, support delivering emergency food and hygiene packs for IDPs, conflict afflicted and injured families, support delivering household items , furniture and even shelter to the conflict afflicted and displaced families, etc.

[i] The Palestinian “Nakba” (“catastrophe” in Arabic) refers to the mass expulsion of Palestinian Arabs from British Mandate Palestine during Israel’s creation (1947-49).