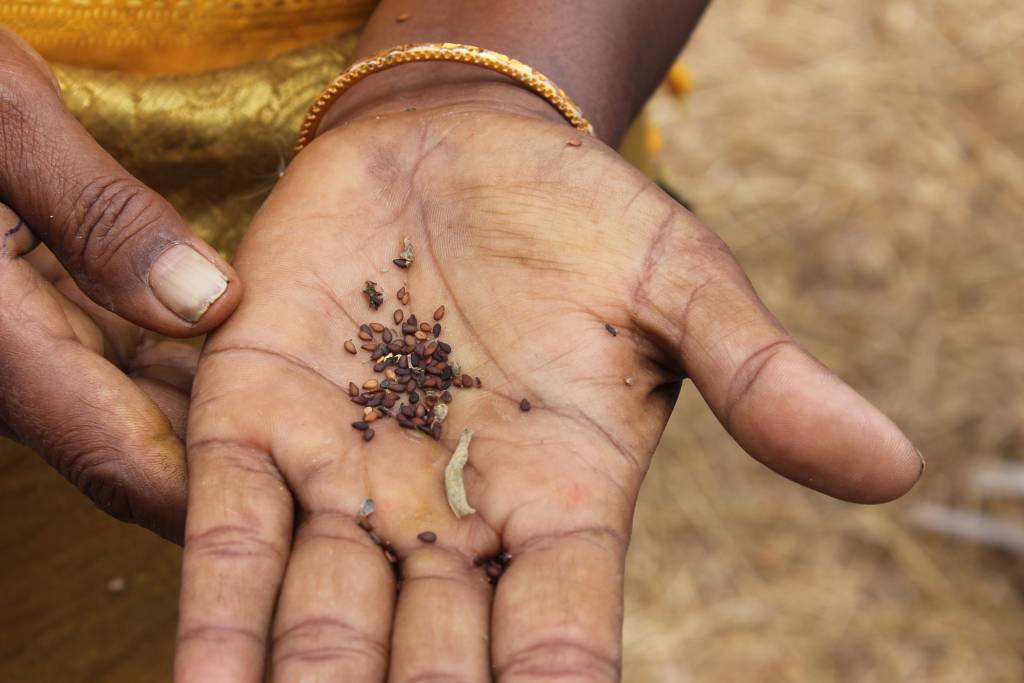 Farmer displaying her seeds. Chethana has helped to organize seeds saver groups all over South India, allowing farmers to select and exchange the best seeds with other farmers. Photo by Valery Nodem.

This year, Chethana, the Joining Hands (JH) network in India, is celebrating 20 years since its founding.  However, the work of Chethana member organizations predates the founding, and annual gathering of beneficiary groups date back to 1996.

Rev. Thomas John, who had played the midwifery role for the safe delivery of this “new baby” at the annual gathering of Presbyterian Hunger Program partners organized in Madurai in May 1999, assumed the position of the Companionship Facilitator of Chethana in 2002. It took another year for this network to consolidate and take on the name of “Chethana” at its Annual Get-together in Mysore in 2000. It grew organizationally and in campaign focus and effectiveness under the facilitation, support and accompaniment of Rev. Leslie Sauer, Ms. Nancy Eng MacNeill and Dr. M. P. Joseph.

By 2002, Chethana decided to transfer its financial management to BIRDS, a partner organization in the Chethana Network, who since then, has been acting as the financial custodian of Chethana and providing all the required financial services. 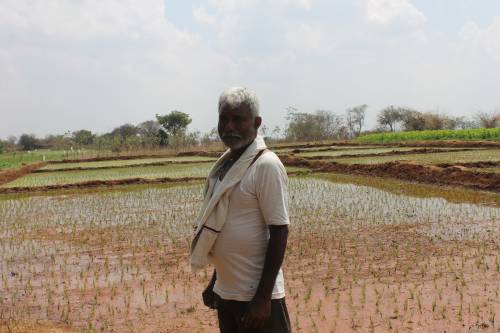 Farmer standing next to his paddy field. Chethana has helped thousands of farmers to retrieve their native seeds and produce food that is culturally appropriate for them. Photo by Valery Nodem.

In the initial years of the network, the campaign agenda was focused on land rights related to endemic caste stratification. The network focused on issues faced by Dalits, Tribal peoples and other marginalized groups such as displacement, migration, land privatization, lack of access to shared resources such as water. As the concerns broadened beyond land to issues of sustainability in agriculture, particularly the growing prevalence of genetically modified (GM) seeds and crops and the growing influence of agro-chemical companies in India, the network initiated a campaign to support native seeds and raise awareness of the dangers of GM seeds.

Chethana mobilized farmers to save traditional seeds to promote self-sufficiency and self-reliance and avoid dependency on expensive foreign inputs.

Chethana remains focused today on saving native seeds, facilitating the farming of native seeds and crops, conservation and dissemination of native seeds, promoting climate resilient minor millets, encouraging biodiversity, and organizing farmers into farmer producer organizations. The focus of the network is summed up in the campaign slogan “Farmers for Self-reliance.” 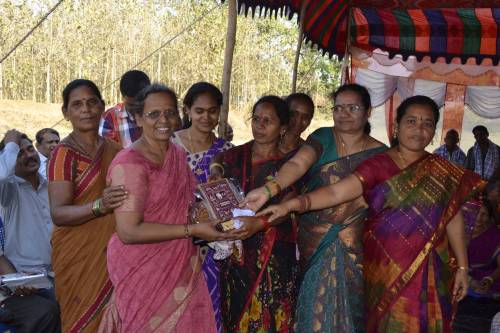 Salome Yesudas, the Coordinator of Chethana, at an event recognizing the work of women farmers. Photo by Valery Nodem.

Chethana provides a platform for farmers to advocate for and practice sustainable agroecological methods to ensure food security, livelihood and human rights.

Chethana members charge themselves with empowering farming communities, particularly Dalits, small and marginal farmers, women, and rural artisans. Unlike large non-profit organizations, Chethana is able to do a lot with a little because of the cooperative nature of the way we work. Faced with the negative impacts of corporate globalization, Chethana is prioritizing the protection of traditional seeds and farming knowledge, while encouraging biodiversity, equipping farmers to adapt to climate change, and working to improve agricultural policies.

Chethana’s main impact is understood in terms of demonstrating to fellow farmers and the community at large, who most often live within clustered households within villages, the effectiveness of conserving and cultivating native seeds as a very viable and profitable alternative to company supplied seeds and chemical intensive farming. Seed saving and organic farming are also seen as a means of preserving the ecosystem and biodiversity and ensuring food and nutrition security for the local community and the nation.

Today, Chethana celebrates decades of walking with the poor and most marginalized people and communities in South India. We celebrate that farmers, who have organized themselves into seed saver groups, have revived more than 50 varieties of native seeds and are sharing them with their fellow farmers. And we celebrate that hundreds of farmers have organized themselves into farmer producer organizations and as collective bodies their voice is powerful and being heard by powerful sectors like government, markets and multinational companies.