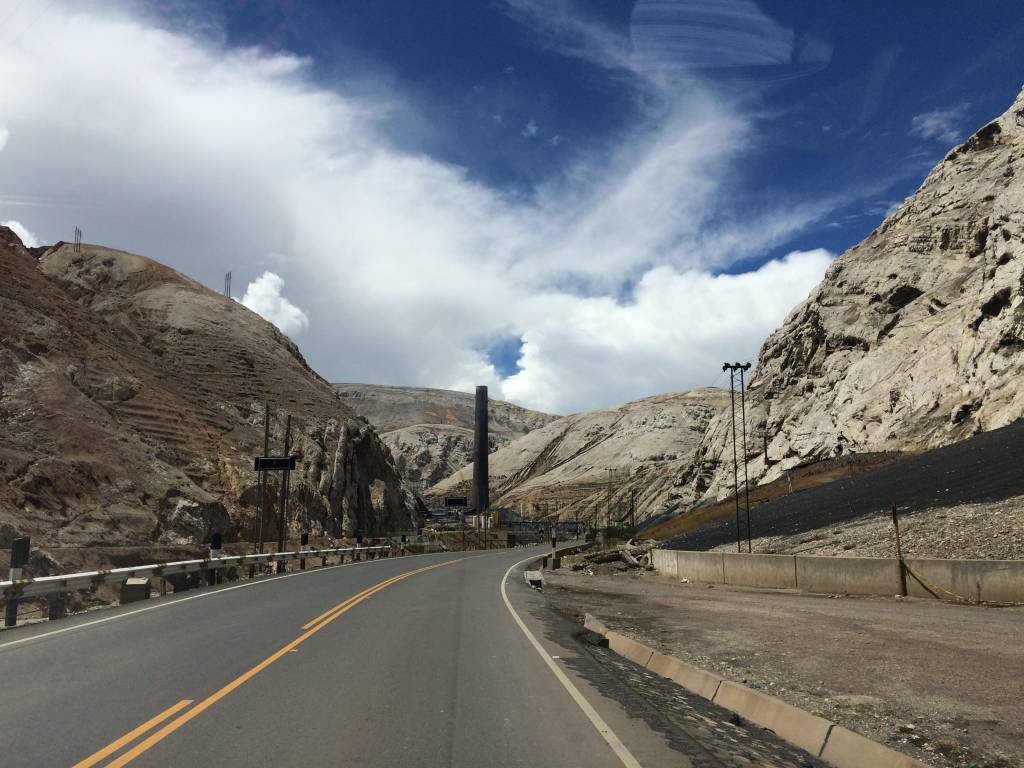 La Oroya, Peru is considered to be one of the ten most contaminated places in the world, due to the toxic emissions from the metallurgical smelter sold to US based company Doe Run in 1997. Photo by Jed Koball.

In a shanty town on the edge of Manila, families gathered their belongings as bulldozers waited on the fringes ready to raze their homes. Preparing to receive world leaders for a gathering of the Asia-Pacific Economic Cooperation (APEC), the government of the Philippines sought to rid the city of this ¨eyesore¨. As I stood there in disbelief alongside those about to lose the very little they had, I sensed something was transforming within me. In many ways this was the beginning of my journey with Joining Hands – long before I even knew it existed.

I knew my country (the United States of America) would be driving the meetings of APEC. I knew the economy that sustained my privileged life would grow from those meetings. I knew my life would in some measured way benefit from those meetings. And, I knew that no amount of charity from the church I belong to (or any church or civil society organization for that matter) could restore the dignity of the families who were paying the ultimate price so that the government could host those meetings. I felt shame. I also felt resolve to do something about it. I was there in the Philippines on behalf of the church (as a Young Adult Volunteer) that I discerned a call to help the church become a better friend to its partners around the globe and above all a better ally to oppressed communities of the world. 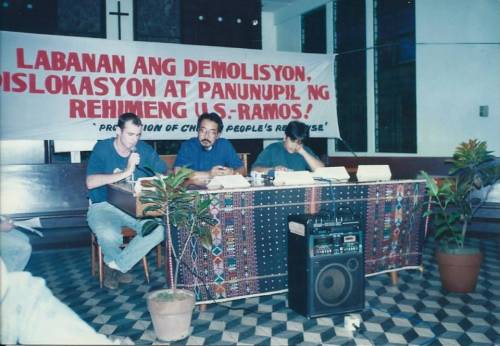 In 1996 at a press conference organized in Manila by the United Church of Christ in the Philippines, Jed sits beneath a banner that reads ¨Fight Demolition¨ as he delivers a prepared statement against the bulldozing of squatter communities by the Filipino government in preparation for the Asia Pacific Economic Cooperation to be held in the Philippines later that year. Photo by Jed Koball.

Twenty-four years later I find myself on the other side of the Pacific. My sojourn from the Philippines took me to seminary in Chicago, a pastorate in New York, community development work in Nicaragua, and finally here – Peru – where I serve as a Mission Co-Worker accompanying our global partner Red Uniendo Manos Peru – a participating network of the Joining Hands Program. Little did I know that at the time the Philippines was negotiating trade and commerce within APEC, Peru was doing its own business selling its extensive mining operations to the world´s highest bidders in an effort to grow its economy.

One mining-related industry that was sold by the government of Peru in 1997 was the Metallurgical Complex in La Oroya, located in the central Andes. The buyer was a St. Louis based company called Doe Run, a subsidiary of the New York based holding company, The Renco Group Inc. Not long after taking ownership, emissions levels multiplied overnight causing immediate concern among families. In fact, at its highest levels, the metallurgical complex under Doe Run´s management spewed out over 1000 tons of toxins into the air each day, leaving 99% of the children with extremely elevated levels of led in their blood and nearly 1000 square miles of land (once agricultural land) contaminated up to four inches deep. 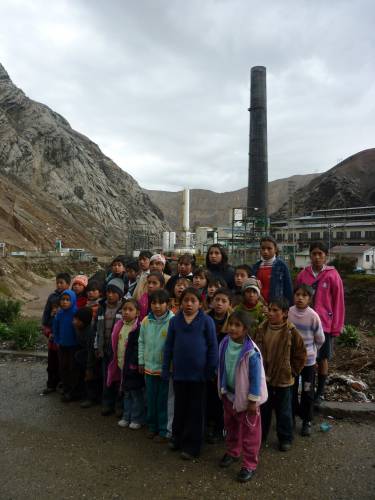 At the peak of production under the administration of Doe Run, the metallurgical smelter in La Oroya emitted 1000 tons of toxic emissions in the atmosphere each day, leaving 99% of the children with extreme levels of led in their blood. Global partner Red Uniendo Manos Peru in partnership with presbyterians in the US were instrumental in getting accredited studies of blood-led levels and calling the attention of the international press, which ultimately led to the suspension of metallurgical activity at the plant in 2009. Photo by Jed Koball.

When the company and government authorities did not respond to their concerns, local citizens in La Oroya approached the church and other civil society groups to help them figure out what to do. In the year 2000, the Red Uniendo Manos Peru in partnership with the Joining Hands initiative of the Presbyterian Hunger Program discerned the call to walk with the people of La Oroya in their struggle for human and environmental health and justice.

Twenty years later, we can count numerous victories, not the least of which are: the first internationally accepted blood-led level study of children in La Oroya in 2005; the halting of metallurgical operations in La Oroya in 2009; a regional law mandating specialized health care in 2012; a successful campaign in 2016 that drew attention to the extraordinary rights provided by trade agreements to foreign investors like The Renco Group, allowing it to skirt its environmental responsibilities in Peru;  and most recently in 2020, a Peru federal government commission led by the Prime Minister and with participation from a resident of La Oroya and the Director of Red Uniendo Manos Peru to design a framework for environmental health to serve communities throughout Peru impacted by mining contamination. This is to say, what we are doing together is working. It is also to say, what we are doing takes time, and over that time we have learned much.

We have learned that the extractive industry – such as mining – is the foundation to the global economy that sustains us and the ¨way of life¨ we defend. Just take a quick look around you right now, wherever you are: it is nearly impossible to not see something that was produced from metals that were dug up from someone´s back yard somewhere in the world.

We have learned that the extractive industry is not clean, even when it says it is. It poisons the land and ultimately people wherever it goes. Peru alone has over four thousand environmental mining liabilities on record today. La Oroya is but one. 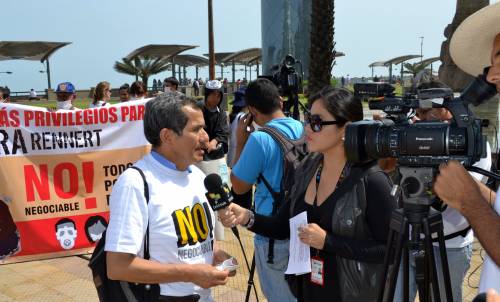 Conrado Olivera, Director of Red Uniendo Manos Peru, speaks with reporters at a rally in 2016 to stop negotiations of the Trans Pacific Partnership (TPP) – a free trade agreement between Peru, the United States and ten other countries – which would provide extraordinary rights to foreign investors, allowing them to circumvent local environmental regulations. The US ultimately pulled out of TPP negotiations, and subsequent trade agreements are reconsidering the rights afforded to foreign investors. Photo courtesy of Red Uniendo Manos Peru.

We have learned that those who pay the price with their health, life and livelihood so that we can have the metals that make the stuff we enjoy are mostly poor and mostly people of color. In Peru, it is the indigenous who suffer most from our greed and indifference, as we sacrifice their bodies, their land, and their relationship with the sacred – a relationship with the Earth from which we all would benefit.

We have learned that the global economy that sustains the ¨way of life¨ so many of us feel entitled to not only oppresses people in so-called ¨under-developed¨ countries like Peru, but it does so in the United States as well. The same company, Doe Run, that has incessantly poisoned La Oroya also poisoned the town of Herculaneum, Missouri outside of St. Louis. Likewise, we know the indigenous lands of the US are under constant threat from extractive activity such, just as black lives are attacked daily by environmental liabilities in cities across the US. We have learned that the struggles are related. They are part of a common web of deceit and destruction. 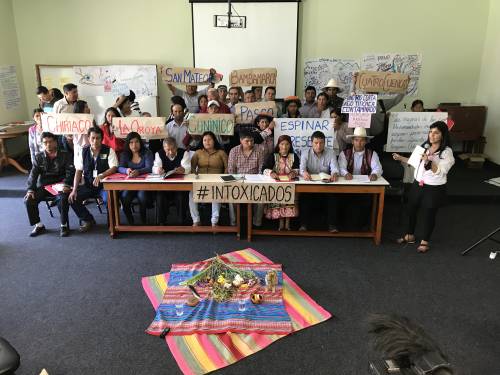 Community leaders from La Oroya gather with leaders from ten other communities from across Peru that are also severely impacted by mining contamination. In 2020, organized as a the National Platform of Peoples Affected by Toxic Metals, they successfully negotiated the formation of a federal government commission in which they will participate in order to design a framework for environmental health policy for communities impacted by mining activity. Photo by Jed Koball.

We have learned that standing up and fighting back is dangerous. We have known this in our heads, but now we know it in our bodies, too. The extractive industry – the global economy for that matter – has the full weight and force of billion dollar interests and corrupted officials and so many other elements of society to defend it at any cost. It is not a fight one can take on alone. It requires us to stand together.

We have learned that together we can make headway. When the people of Herculaneum met with the people of La Oroya, the press took notice and their stories were heard. When the people of La Oroya met with communities across Peru also fighting for their lives and livelihoods in the face of mining and oil interests, the government took notice and their voices were heard. Of course, simply being heard is not enough. Which is to say, what we have done so far is still not enough. 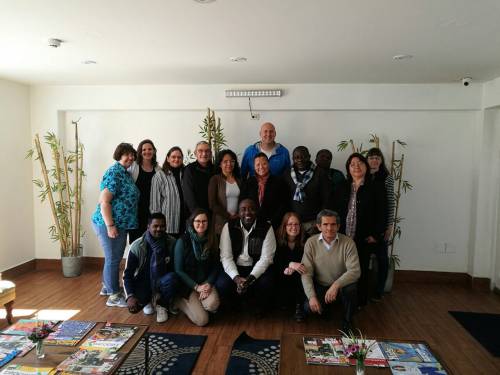 The Joining Hands initiative of the Presbyterian Hunger Program brings together networks of churches and civil society from across the world to build solidarity and develop effective strategies in addressing the root causes of poverty, particularly in relation to the extractive industry, land grabbing, and global trade. Photo courtesy of Jed Koball.

We have learned that what the church does best in this work is to allow for space for oppressed peoples of the world to come together. We are at our best when we acknowledge who must be leading the struggle. We are at our best when we recognize our position of power and privilege in the world and either use it in defense of those being oppressed or toss it away altogether so that the oppressed may rise up in our midst. We have learned that from our unique vantage point in the world as the church, we have the opportunity to see what the global economy strives to keep hidden with its figurative and literal bulldozers. We have learned that the ¨eyesores¨ of the world are what give us true clarity of vision.

What we are doing is not only working, it is relevant. And, it is what we must continue to be doing, only amplified. As we know that what happens in one corner of the world is not disconnected from what happens in another, and as we know that the struggle is most effectively advanced in our coming together, then perhaps we can discern a call together. I believe Global Solidarity is that call – not just solidarity among the oppressed peoples of the global South, but solidarity of peoples throughout the world, including the US. I believe this is why we call ourselves, our movement ¨Joining Hands.¨  I believe this is the work that should shape our place in the world as Presbyterians today, and I invite you to join us in this sojourn, wherever you may find yourself. I do not know where this journey will lead us, but I do know this – we do not go alone. We go with God. And, we go with one another.