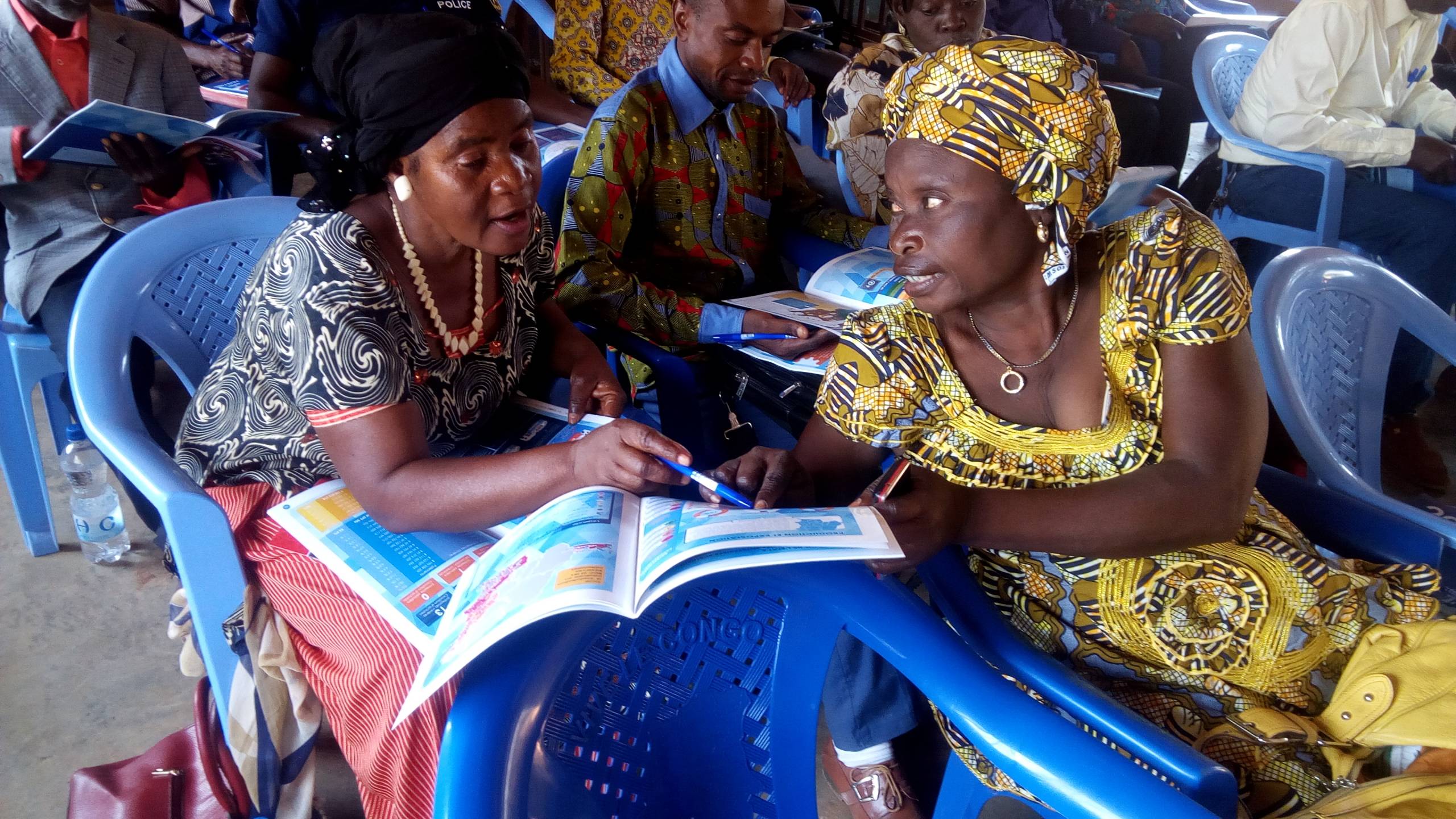 Women review a mining report at an education event for communities. Photo courtesy of POM.

Despite its vast mining potential and all the wealth mining brings to the Democratic Republic of Congo (DRC), it ranks among the poorest countries in the world, with a human development indicator of 176 out of 184. There are many causes for the massive poverty in the country, including instability, bad governance and corruption.

Mining is the primary industry of the DRC, and the country holds the largest reserves of coltan and cobalt in the world.  The city of Lubumbashi is the hub for the largest mining companies in the country, situated in the Haut-Katanga province, which is the heart of the country’s mining operations.

In 2014, the Presbyterian Hunger program (PHP) started partnering with the Platform of Civil Society Organizations Working in the Mining Sector (POM), headquartered in Lubumbashi. POM was the latest network to join the Joining Hands initiative.

For years, POM has witnessed the massive amount of resources extracted from the Haut-Katanga province and the wealth generated with very little reinvested in local development. Mining communities in many instances are the poorest in the province, with higher rates of hunger and diseases. 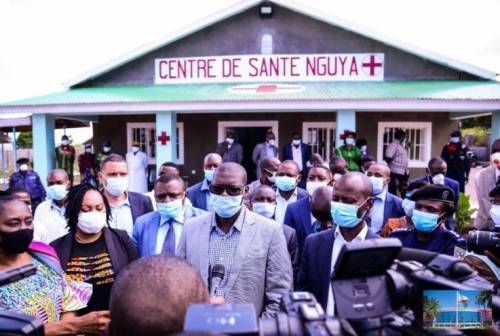 Inauguration of Health Center in Nguya, paid with mining royalties, in July 2020 by the Governor of Haut-Katanga Province. Photo courtesy of POM.

POM decided to do something about it; they studied the country’s laws, trained communities so they understand their rights, and advocated for more resources to be invested in impacted communities. In 2002, the DRC liberalized its mining sector, which led to a significant increase in the number of mining companies in the country and an increase in mining production. In 2017, more than 200 private mining companies were in production. That year same year, the DRC produced 1,090,000 tons of copper and 73,940 tons of cobalt.

However, the wealth generated from the extraction of these metals did not improve the living conditions of local communities. At the time, mining companies were not required to reinvest revenues and profits into impacted communities to further their development despite their capacities  and the benefits of doing so. 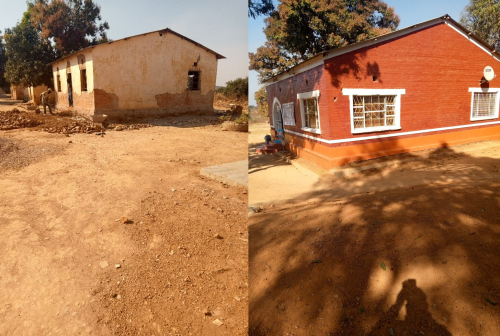 A before and after photo of a home rehabilitated by the community with mining revenues. Photo courtesy of POM.

For example, in 2016, POM conducted a study on the social and environmental impacts of the Frontier S.A operations on the local communities of Sakanya and Kinfumpa living within the mining area. Frontier S.A is a subsidiary company of Eurasian Natural Resources Corporation that is exploiting copper and cobalt from the area, 250 km from the city of Lubumbashi, in the south-east of the DRC. The main findings of the investigation report were:

POM distributed the report to impacted communities and authorities in Kinshasa and Haut-Katanga for awareness raising and problem solving. POM also used the report to co-produce a documentary with the Center for Research on Multinational Corporations called “Whose Wealth – Cobalt from Congo Documentary” which documented the social and environmental impacts of the Frontier SA’s mining activities on local communities.

On top of this, POM also trained local communities on monitoring the legal and contractual obligations of mining companies. The communities then organized themselves to form associations for the defense and promotion of human rights and development. Because of our work, Frontier S.A now regularly organizes public consultations with local communities.

Empowered by its research on Frontier SA, in 2018, POM conducted a campaign for improved drinking water for the local communities of Sakanya, about 50,000 inhabitants. Despite the wealth generated from the industrial exploitation of minerals in the area, the populations of Sakanya remained poor and lacked easy access to basic necessities like drinking water. POM published a case study report on the community’s drinking water problems and a documentary. Following these advocacy actions, the Frontier company installed a few wells and water pumps in the city of Sakanya. The Governor of Haut-Katanga province also inaugurated a program to improve the drinking water supply throughout Sakanya in July 2019.

All this work has made a difference in the lives of thousands of people impacted by mining. Since the beginning, POM has always been convinced that to bring about real structural change, it had to turn its focus towards advocating for the revision of the Mining Code to improve the living conditions of local communities within mining zones. 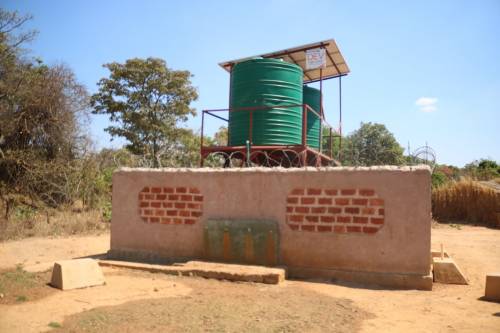 Wells with a cistern constructed by Frontier SA at Kinfumpa, in Sakanya territory. Photo courtesy of POM.

One of POM’s biggest achievements has been advocating for and ultimately influencing the revision of the DRC Mining Code in 2018. In the revision, POM and its allies were able to win the inclusion of three favorable provisions for the development of local communities in mining areas. The provisions were:

Currently, the heads of local communities, in particular those of Bayeke, Dilala and Luilu in the province of Lualaba and those of Bukanda, Kaponda, Ruashi and Kampemba in Haut-Katanga, having directly received their share of 15% of the mining royalties from companies, have carried out the rehabilitation or construction of agricultural supply roads and bridges, administrative buildings, schools and health centers, and the drinking water supply.

Many students can now study in newly built or rehabilitated schools and sit on desks instead of bricks or wood. Many community members drink water from standpipes instead of from the river. With improved roads, farmers can more easily transport their produce from their fields. The testimonies of positive changes are numerous.

In February 2020, POM organized meetings and a three-day workshop between the Minister of Mines, the Minister of Social Affairs, experts from their respective cabinets, and civil society organizations, which resulted in the standards for the governing statutes for the social development funds, an inter-ministerial decree to be signed by the two ministers, and a manual on social development fund procedures. This work is so important because it will result in transferring more resources and power to local communities, so that they can be in charge of their own development.

Even with all our work and the impact that we are seeing in the lives of communities every day, the road out of poverty is still long. But looking back, we are extremely proud of the work that we have been able to accomplish, and the change that we are seeing. We are grateful for partners like PHP for understanding that this kind of work takes time and patience. Our vision remains the same: to see local communities get their share of the wealth from mining and improve their living standards.