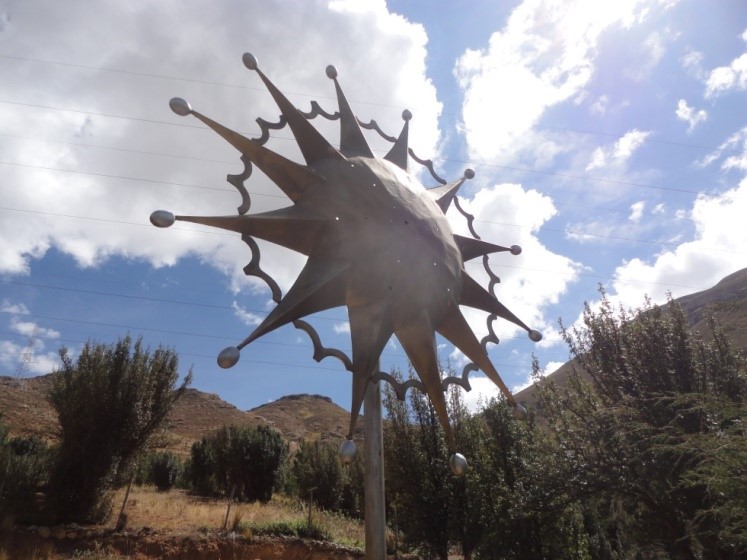 For I am longing to see you…that we may be mutually encouraged by each other’s faith… Romans 1:11-12

Fifty-five years ago, in the spring of 1965, as a Junior in college, I was preparing for my first international journey as a Presbyterian Volunteer in Mission (VIM) in Peru and my introduction to Presbyterian World Mission. My itinerary on the way to Peru, planned by Margaret Flory, Presbyterian staff initiator of the program, took me to Mexico City, Merida/Yucatan, Guatemala City, San Jose/Costa Rica, Bogota/Colombia, and Quito/Ecuador, meeting and staying with mission personnel and doing site visits to their work.

Eventually I arrived in Lima, Peru where I met mission personnel and stayed with a family until the group I would be with for the remainder of the summer arrived.  In a few days we were on a bus, travelling into the Andes Mountains, beyond Cusco, the original Inca Capital, to Hacienda Urco, to be part of an international, ecumenical study/work camp. For the next weeks the work consisted of renovating an old hacienda building to use as a community center. The study focused on Bible studies, subjects such as the history of Peru, the role of the church and ecumenism, the status of El Indio and the church’s relationship to addressing the many issues of poverty and land ownership related to the indigenous population.  Outside speakers shared their knowledge and leadership expertise concerning the church and society. 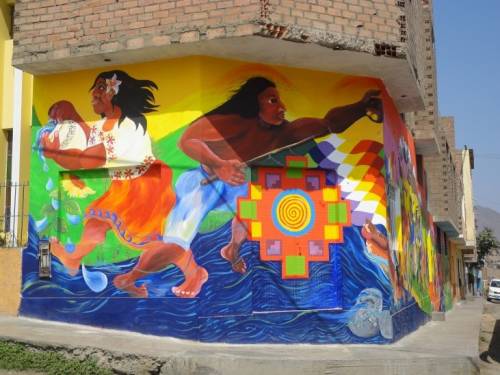 During these weeks I fell in love with Peru—the country, the people, the mountains, the music, the Sacred Valley that the hacienda overlooked. I stayed an extra two weeks with the mission personnel at the hacienda and another family in Cusco until it was time to return home and prepare for my last year at college. During my time in Peru, my world view changed. When I returned home, the contrast between the richness of the United States and the poverty of a developing nation was an acute culture shock. Reluctantly leaving, I hoped I would return some day to work in Peru.

Well that didn’t happen as the next years led to seminary, marriage, family, and serving congregations and special ministries.  However, my husband and I did return to Peru in 1983 as part of a short-term medical/construction team mission trip.  I also was part of or led other global, national, and local mission endeavors.  Over the years, I tried to keep up with news about Peru and brush up on my Spanish from time to time, but it wasn’t until 1998 when we moved to become co-pastors of a congregation in St. Louis in the Presbytery of Giddings-Lovejoy that I renewed my acquaintance with Peru.

A new initiative of the PC(USA) Hunger Program called the Joining Hands Partnerships was being launched as a prototype for mission partnerships that would go beyond short-term mission trips, funding a “missionary”, or doing construction or short-term projects.  The focus of Joining Hands (JH) was for presbytery/congregational and international partners to join as equals to study, pray and work together to address systemic issues of poverty and hunger.  Our presbytery’s partner country happened to be Peru, one of eight Joining Hands Partnerships. Our congregation was not one of the original presbytery congregations that were part of this partnership, but, because of my long-time interest in Peru, I asked if I could sit in on one of the partnership meetings.  The rest is history. 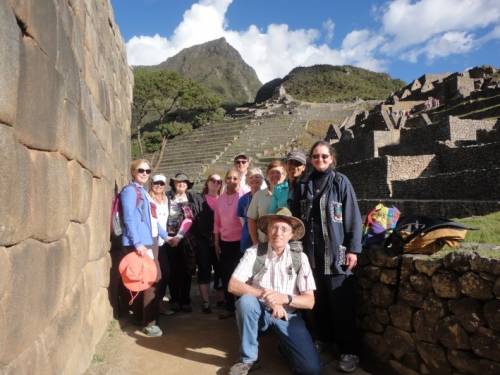 The uniqueness of this partnership was that the role of the American church partners was first to listen to the international partners as they discerned what was needed for their country and then work together as equal partners to address that need.  This was not a call for the US church to rush in and impose preconceived or sometimes ill-conceived answers or quick fixes to long-term problems.  Also, partnerships on both sides included ecumenical, interfaith, and non-governmental organization partners because all were needed to address emerging complex issues of globalization that affected the church and larger world.

The first year of the partnership was spent studying about the history and social/economic/cultural dynamics of Peru as well as the impact of globalization on the church and civil society of Peru and the U.S.  This was the first phase of our listening journey.  We also started connecting with our Peru Partner through the Joining Hands Peru Companionship Facilitator, Mission Co-Worker, Hunter Farrell, who served as the liaison between both sides of the partnership.  In December 2001, the first delegation of four representatives from the Presbytery Joining Hands Peru Partnership traveled to Peru to meet our new partnership colleagues at their Annual Assembly.  A January 2002 meeting of the Assembly discerned three issues that addressed root causes of hunger and poverty in Peru: environmental Justice and the health of children, economic development and human rights. In 2002, we discerned steps to address these three focus areas and divided up into three task forces, each working more specifically in each of the three defined areas.  Eventually I became Coordinator of the Environmental Task Force.

Environmental Justice and the Health of Children

Egregious contamination of air, water, soil, vegetation, animals, people, and the central bread basket agricultural area of the Andes community La Oroya (one of the 10 most polluted places in the world), was caused by a metallurgical complex (lead and other heavy metal smelter), owned by St. Louis-based Doe Run Resources. 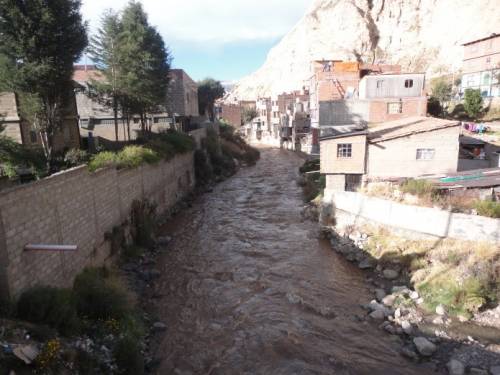 At the time 97% of the children were lead-poisoned and a majority would have been hospitalized had they been in the U.S. Many illnesses were attributed to this contamination.  This same company also had the largest US lead smelter in Herculaneum, MO, within our presbytery boundaries, also contaminating the air, water, and soil, people and houses of this community.

Mining is a major industry in Peru and creates a perfect storm:  a land rich in mineral resources; international companies eager to exploit those resources in a country with lax environmental standards and lower wages; free trade agreements that favor corporations; a Peru government that needs the income; and local people who are desperate for employment, often unaware of health risks.

A campaign for the health of children in La Oroya was started to get the word out about the contamination situation and invite support from the churches and other groups in the U.S.  Videos, articles, bulletin inserts, media segments, networking with many groups, speaking engagements, prayer vigils, letter campaigns all worked to spread the word and give voice to those who were kept silent by the company, under threat of losing jobs or life.  In addition, Doe Run was not in compliance with its environmental agreement with the Peru government, and, in fact extended it, so accountability of the company was also addressed. 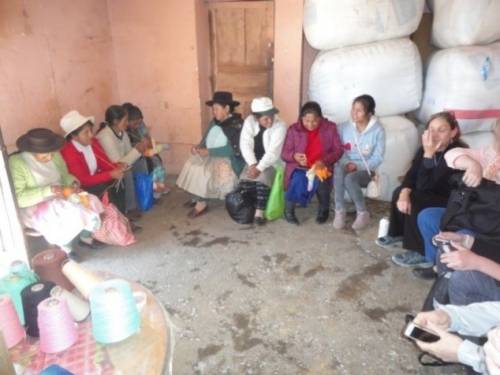 There was a need for economic development that would help local people whose livelihoods were being undercut by international companies that monopolized economies through free trade agreements.

A fair-trade market, Bridge of Hope, was created between artisans in Peru and churches in the Presbytery of Giddings-Lovejoy and beyond.  Artisans were trained in fair trade principles and practices.  The first artisan fairs in the presbytery were held just 2 months after the task force coordinators and the team coordinator travelled to Peru in September 2002.

From 1980-2000, violence and warfare between rebel groups The Shining Path and Tupac Amaru and the Peruvian Military killed 69,000 people and devastated communities, particularly Andean, indigenous communities, the poorest of the poor.  Distrust among family, community and government permeated society and prevented cooperation needed to rebuild community. 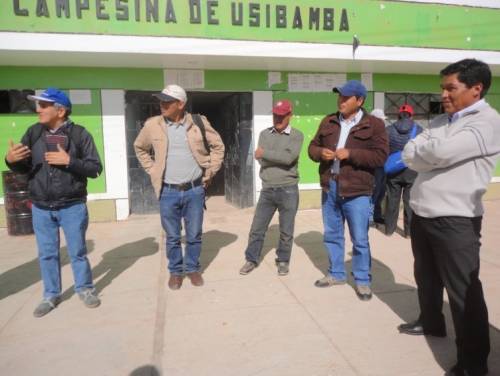 Joining Hands would help groups collect stories of their experiences during the Shining Path Era of losing loved ones, property, livelihoods and present these to the government along with requests for the truth to be known about what happened to people and justice to be carried out.

Further delegation interchanges brought partners together, and actions in each of these areas were implemented in subsequent years. Read more about these actions here

Now in 2020, we are looking at the 20th Anniversary of this incredible partnership—a time to reflect on what we have learned during this incredible journey and what needs to be done in the future.  A few reflections:

Due to the coronavirus pandemic, our 2020 Joining Hands Peru Pilgrimage and 20th Anniversary Celebration in Peru has been postponed until 2021.  In the meantime, I continue to be transformed by this partnership which has deepened and broadened my faith understanding, my global awareness, and my connection with partners far and near, and has intensified the Matthew 25 call to respond in love and justice.

In that regard, without romanticizing the often-tragic history and difficult issues facing this partner country, I am still falling in love with Peru and am looking forward to returning and being face to face with our partners, friends, brothers and sisters in faith and mission.

And I invite and encourage congregations to come to Peru and Join Hands with our partner.  Our 2021 Peru Pilgrimage and Celebration:  May 29-June 13.

Maybe you, too, will fall in love again with God’s mission as you respond to Christ’s calling.

The work of the Presbyterian Hunger Program and Joining Hands is possible thanks to your gifts to One Great Hour of Sharing.