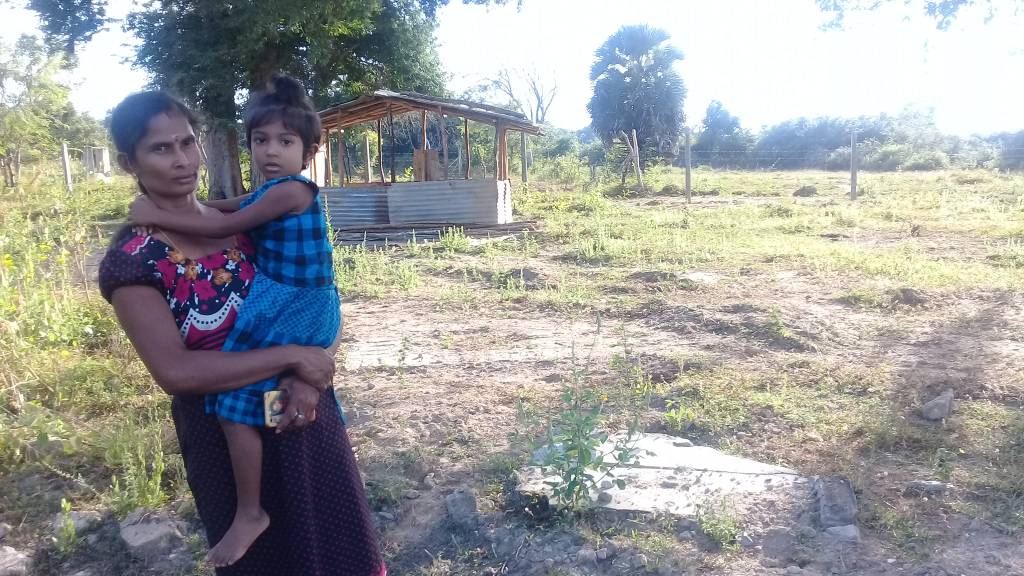 A woman and her daughter return to their land in the Pulakudirippu area after being displaced by war. They still lack decent shelter, access roads, transportation, health care, and education facilities. Photo courtesy of Praja Abhilasha.

Sri Lanka is in the midst of a debt crisis. In 2016, 95.4% of all government revenues were going directly into debt repayment. According to the Minister of Finance (2018), the country’s debts amount to 82.9% of Gross Domestic Product. In 2018, the Government of Sri Lanka owed more than $74 million or $3,415 per person.

The Prime Minister of Sri Lanka recently asked India for a 3-year extension on loan repayments for debts owed to India. The Government of Sri Lanka is facing severe difficulties to pay the salaries of public servants and contractors who have completed government projects.

It is within this context, that the U.S. Government has approved a five-year, $480 Million compact with the Government of Sri Lanka through the Millennium Challenge Corporation (MCC). The goal of the compact is to develop two sectors of the economy that are strategically important for improving economic growth and reducing poverty: 1) transportation infrastructure and 2) land rights and access to land.

However, many Sri Lankans are concerned that the MCC will limit Sri Lanka’s capabilities to develop and could exacerbate poverty. 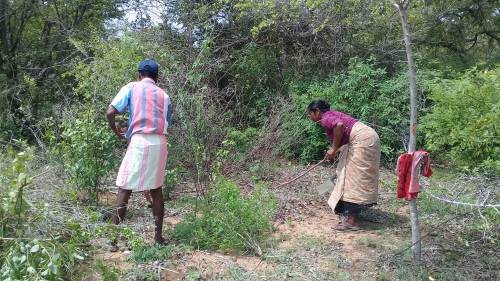 A couple clears their over grown land in Panama after returning. Photo courtesy Praja Abhilasha.

The land reforms expected to be carried out under the MCC are inadequate to address needs for land among Sri Lankans, particularly women, people in war-affected areas and low-income groups. The execution of the proposed land reforms will result in disenfranchising these vulnerable communities as well as excluding smallholder farmers from the prospect of land ownership. We identify several dangers behind the proposed land reforms:

1.     Endangers food sovereignty: Increasing the marketability of land and eliminating restrictions on land holdings will directly affect smallholder farmers in Sri Lanka who are the backbone of agriculture. Both local and Multi-National Corporations in agri-businesses, interested in producing food for profit maximising, will amass land to practice export-oriented monocropping agriculture. Smallholder farmers, who make up 27% of the labour force, will lose their land or will be forced to become wage-labourers on industrial farms or migrate to cities seeking jobs. Distressed with high food price inflation and lose of harvests due to climate change, Sri Lankans feel the importance of ensuring food sovereignty than never before. In this regard, government policies should be directed towards investing in agriculture to strengthen and empower the smallholders.

3.     Poverty exacerbation: Contrary to the poverty reduction promised, the nature of economic development made possible through donor projects such as MCC will further deteriorate the living conditions of women, smallholders and other vulnerable communities already facing socio-economic hardships due to the application of ineffective economic policies. A mere increase in GDP does not guarantee poverty reduction or an elevation of living standards for people.  The MCC fails to engage local leadership in development projects which is vital to the success of those projects. 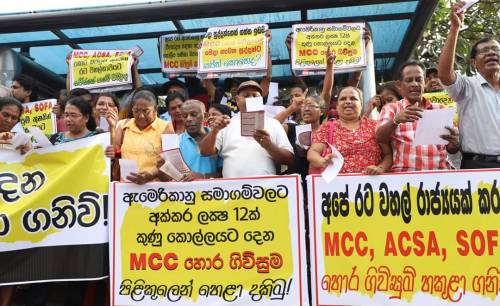 MCC proposes to invest in the transport sector to alleviate traffic congestion in the Colombo Metropolitan Area and smoothen the flow of labour, goods and services between markets and ports. It is not clear how the proposed projects will result in poverty reduction. According to our analysis, the suggested investments in transport infrastructure fall short in addressing the real concerns due to several reasons.

1.     Rural roads neglected: A majority of the Sri Lankan population lives in rural areas. Even though MCC claims to reduce poverty, selected areas to develop transport infrastructure excludes areas which have the highest prevalence of poverty in Sri Lanka. MCC is focused on developing toll roads and highways which could be accessed only by people who can pay. Apart from excluding a sizeable portion of the Sri Lankan population, such development projects also contribute to the privatisation of transport. A project-oriented towards alleviating poverty should invest in the rural road network and transportation system given the poor conditions of rural roads and the scarcity of buses in rural areas which places additional pressures on the meagre incomes of low-income households.

2.     Development of railways ignored: Railways constitutes an affordable and a most sought after mode of transportation in Sri Lanka. However, successive governments of Sri Lanka have failed to upgrade and expand the rail-lines. An integrated system of coastal and internal rail lines accompanied by a rapid rail line would be able to address the transportation needs of a larger portion of the population. Even from a purely economic point of view, rail lines are better placed to support the transportation of goods from markets to ports. Loss of arable land and human settlements to accommodate the proposed road networks will place additional stress on shrinking agricultural land and displacement of people due to development projects.

Our analysis on land, infrastructure development and geo-political implications reveal that instead of contributing to sustainable economic development and poverty reduction, the signing of the MCC will lead to further deterioration of standards of living by hindering the developmental capacities of the country and making Sri Lanka vulnerable to regional and inter-regional conflicts.


One Response to “Foreign Investment Worsens Poverty in Sri Lanka”