Communities in Peru and the U.S. join forces in the fight against  toxic metals 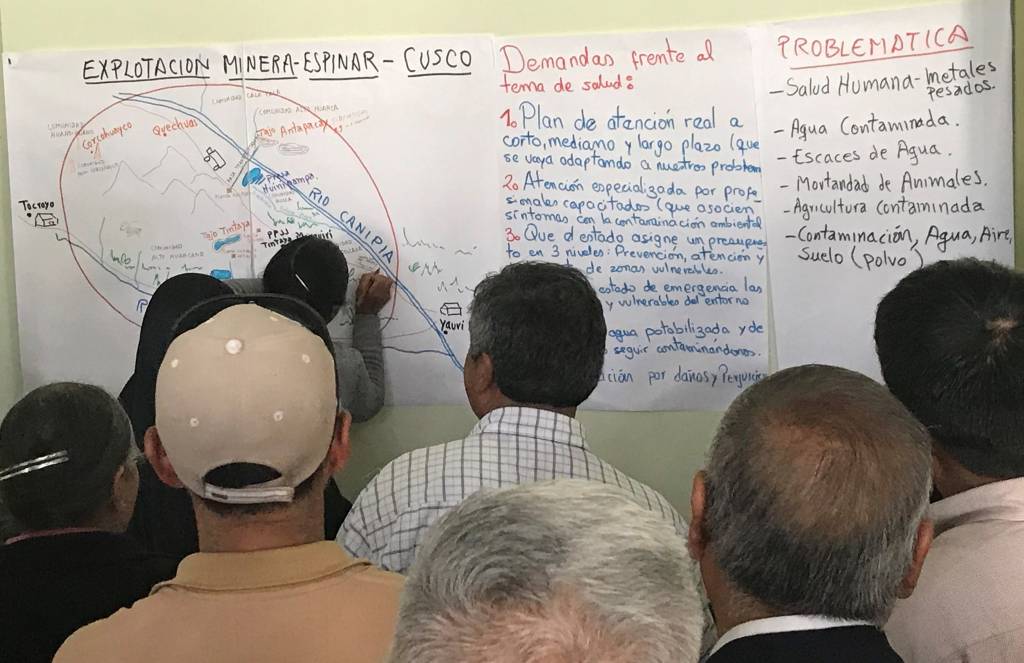 A community leader from Espinar, Cusco explains to fellow members of the National Platform of Communities Impacted by Toxic Metals in Peru about contamination caused by the mining operations of Swiss based Glencore. Photo Credit: Jed Koball.

The encounter between residents of Herculaneum, Missouri and La Oroya, Peru over 15 years ago was nothing less than serendipitous.

Twenty years ago, when the Presbyterian Hunger Program (PHP) was launching its Joining Hands Against Hunger initiative. PHP was recruiting presbyteries to partner with global networks in order to accompany them in addressing systemic root causes of poverty. Giddings-Lovejoy Presbytery in the St. Louis, Missouri area was matched with Red Uniendo Manos Peru (the Peru Joining Hands Network). The partnering was rather random, as members of Giddings-Lovejoy had no previous knowledge of the Peruvian network nor of the issues it was facing. In hindsight, it was clearly the work of God.

At the turn of the century, Red Uniendo Manos Peru, a network comprised of Peruvian non-governmental organizations and churches, was facing a national context of rapid privatization of industries – a strategy put in place during the 1990´s at a time of great political upheaval and violence throughout the country. 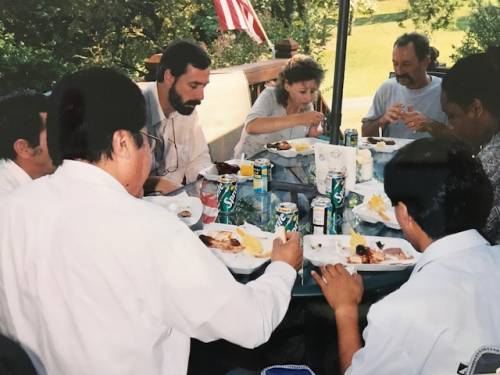 With the support and facilitation of Joining Hands and Giddings-Lovejoy Presbytery, friends from La Oroya, Peru traveled to Missouri to meet with community members of Herculaneum. Here they are having dinner at the home of Jack and Leslie Warden who were community leaders fighting for their rights in the face of contamination from Doe Run. Photo Credit: Ellie Stock

Furthermore, a national plan to stimulate the economy through the growth of the mining industry was enacted, and foreign mining companies were buying once state-run operations at bargain basement prices.

Among the companies sold off by the State of Peru was the metallurgical complex in the Andean town of La Oroya.  The complex was considered the largest and most capable of its kind in the entire Western Hemisphere. It was crucial to generating added value to the endless wealth of minerals being mined in Peru and shipped around the world.

The smelter was also considered to be generating thousands of tons of contaminants in the air, soil, and water every day, making La Oroya one of the ten most contaminated places in the world.

The impact of such toxins on the health of the people of La Oroya was of grave concern, and the Red Uniendo Manos Peru discerned a call to accompany the people of La Oroya in their fight for clean air and effective health care. And, Giddings-Lovejoy Presbytery accepted the invitation to walk alongside Red Uniendo Manos Peru in this struggle for justice.

For Giddings-Lovejoy, they had much to learn. They traveled to Peru to not only meet their new partners of Red Uniendo Manos Peru but also to know the people of La Oroya who were organizing themselves in defense of their health. And in these initial encounters, they began to gather facts, not the least of which was the identity of the foreign company operating the smelter in La Oroya. That company? Doe Run. 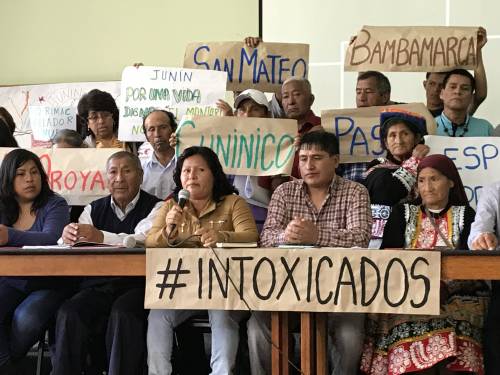 With the support of Joining Hands, Community Leaders from La Oroya have joined with leaders from ten other communities across Peru that are also impacted by mining contamination, including the community of Espinar in the Cusco Region where the international mining company Glencore has operations. Photo Credit: Jed Koball

The name ¨Doe Run¨ may have rung a bell at first, but it was not until further investigation that Giddings-Lovejoy understood is relevance. Doe Run is a US based company with headquarters in St. Louis, Missouri! Not only that, it operated a smelter in Herculaneum, Missouri about an hour outside of St. Louis, within the realm of the presbytery.

And, to no one´s surprise, the smelter in Herculaneum was also under pressure from the local community for contaminating the air, soil and water of the town and gravely impacting the health of the people. If there had been any doubt about this call to global partnership in the pursuit of justice, it was quickly erased. God had brought them together for such a time as this. And, the presence of God has been known time and time again over the course of these past twenty years of advocating for justice, both in La Oroya and in Herculaneum.

This was a story of God´s people being brought together from strange places to overcome a common threat to their inalienable right to abundant life.

Perhaps the most divine experience was the bringing together of residents from both towns – two peoples from radically different worlds, echoing one another’s stories of struggle as they hold on to hope for something better. This was not a story of one people coming from afar to rescue the other. This was a story of God´s people being brought together from strange places to overcome a common threat to their inalienable right to abundant life. It was this coming together of peoples that fueled a movement that has had international impact, even to this day.

About a month ago, I received an email from a complete stranger. She is a member of a Presbyterian church in northern Minnesota. Her congregation had discerned a call to support Presbyterian World Mission, and they were intrigued by the work we have been doing these past twenty years in La Oroya.

In her introduction to me, she asked if I had heard of the Swiss-based mining company Glencore. In fact, I had. In recent years, Red Uniendo Manos Peru, in its continued efforts to secure specialized health care in La Oroya, has helped organize the National Platform of Communities Impacted by Toxic Metals in Peru. Among the communities that form this platform is one from the region of Cusco, Peru, where the mining operations of, none other than, Glencore pose threats to the well-being of the community there. 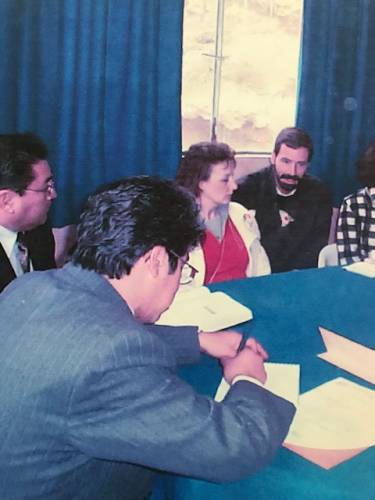 Leslie Warden from Herculaneum, Missouri prepares to give testimony before the Peruvian Congress about the contamination by Doe Run in her hometown in Missouri. Former Mission Co-Worker, Hunter Farrell, translates for her. Photo Credit: Ellie Stock.

To very little surprise, my new friend from Minnesota indicated that Glencore is also threatening the well-being of communities, right in their own backyard, in Minnesota where the company has plans to initiate a new mining project.

Is this God at work again? Is this another serendipitous encounter? Or is this one more divine wake up call to a strategy for global partnership?

For so long I have thought of the Joining Hands initiative as one of partnering resourced Presbyterians with global networks to accompany and support them in their work. The difference from other mission partnerships was that this would be shaped by advocacy and address systemic causes of poverty as opposed to development and charity. I saw the work of the Joining Hands initiative as identifying US based companies and US foreign policies that US Presbyterians could address from home.

The connection between Doe Run, La Oroya and Herculaneum all just seemed coincidental and fortuitous in the sense that it engaged a wider swath of people at a deeper level of commitment. But, the call from Minnesota opened my eyes to what has been staring me in the face for well over a decade now. Namely it is this: we are ALL threatened by industry run amok, especially extractive industries like mining.

The work of Joining Hands is not necessarily to find and address a specific set of companies (such as US based companies) that are threatening people around the world. Rather, our work is to facilitate relationships between communities on a global scale that are threatened by the same powers of globalization and the industries and companies that drive it, regardless of where they come from.

It is time to move beyond serendipity, waiting for God to bring us together. God is telling us to bring ourselves together!

There are numerous foreign mining companies at work in Peru, from all corners of the globe. These same foreign mining companies have operations not only throughout the Andes, but throughout the Americas. Many of the same companies we are hearing about in the National Platform of Communities Impacted by Toxic Metals in Peru are also operating in the US – in Minnesota, Missouri, Nevada, Colorado, and many other places.

In each place, the threat to human well-being is urgent, yet the struggle to organize and confront such a threat is overwhelming and often so very isolated. What the people of La Oroya and Herculaneum have taught us is that together we are better, we are stronger, we are more resistant.

Our call as a church is to make that happen. It is time to move beyond serendipity, waiting for God to bring us together. God is telling us to bring ourselves together!