On January 18, a U.N. humanitarian facility in Ngala, Borno State, Nigeria, on the border with Cameroon, was violently attacked by non-state armed groups. The aid workers there were providing assistance to more than 55,000 people facing famine conditions.

20 displaced people seeking assistance were killed in the attack. While no aid workers were killed, OCHA says that aid workers are increasingly being targeted in attacks.

Borno State in northeast Nigeria has been the area impacted the worst by Boko Haram violence which has made getting aid through to those in need in the area extremely difficult.

In 2017, 5.1 million people were severely food insecure and facing famine in Northeast Nigeria. As of December 2019, 53% of the total population of 13.4 million people in the crisis-affected northeast states of Borno, Adamawa and Yobe are in need of humanitarian assistance.

The Northeast region is one of Nigeria’s agricultural centers, producing cereals, vegetables and livestock. However, the increasing incidence of Boko Haram violence there has devastated agricultural production in the region. People have had their property destroyed, livelihoods disrupted, and been displaced from their ancestral homes and farmlands. 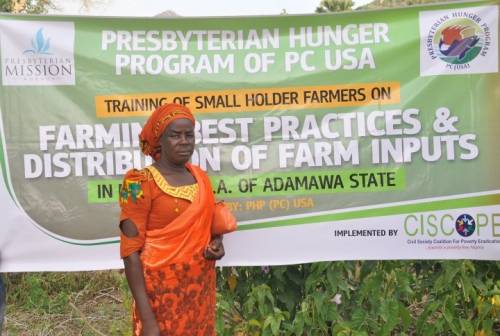 Kwata Zira participated in a farming best practices training by CISCOPE, with PHP support, and received farm inputs after returning to her home after fleeing the violence. Photo courtesy of CISCOPE.

The Presbyterian Hunger Program (PHP) is currently partnering with the Nigerian grassroots organization CISCOPE in Adamawa State. The communities supported through CISCOPE’s work are attempting to rehabilitate their agricultural activities and lives after Boko Haram militants burned down homes and fields, stole farming tools and food stocks, and raped women and girls.

The Boko Haram violence has displaced 2.4 million in the Lake Chad Basin which crosses Nigeria, Cameroon, Chad and Niger.

The presence of large populations of refugees and internally displaced persons in villages in the extreme north of Cameroon due to the crisis has placed enormous pressures on the availability of food and increased the price of daily goods in the zone. RELUFA, the Joining Hands network in Cameroon, has been working to extend their community grain banks program in the zone to meet increased needs.

In 2018, the UN Security Council recognized for the first time that armed conflict and violence are closely linked to food insecurity – a risk currently threatening millions of people. Sixty percent of the 815 million people worldwide impacted by chronic hunger live in conflict zones (WFP).

So, if we care about hunger and poverty, we should promote peace and an end to violent conflict everywhere.

Unfortunately, the U.S. administration has taken more of an isolationist stance.

Last week, the Trump administration announced an expansion of its travel ban to 6 more countries including Nigeria. The total number of countries with some sort of travel ban is now 13.

Three of the 4 countries where famine was declared in 2017 are on the travel ban list: Nigeria, Somalia and Yemen. PHP currently is partnering with groups in those 3 countries plus the fourth famine country which is not on the list, South Sudan.

Rather than isolationism, the Presbyterian Church (U.S.A.) chooses welcome.

“In the midst of political debates which seek to divide us between those who are born here and those who are not, we choose welcome, a welcome for all children of God, proclaiming one household.”

Tell Congress to support the NO BAN Act, legislation that would terminate the administration’s refugee, Muslim, and asylum bans and ensure that no one is banned from our country based on religious or nationality-based discrimination.

Give to the One Great Hour of Sharing to support PHP’s extreme hunger and famine work in Nigeria, Somalia, South Sudan and Yemen.

God, we pray that we may learn to truly love our neighbors both far and near. May we grow in our understanding of the struggles that our neighbors face every day to live in peace with food security and shelter. Please guide us as we work to lift the voices of those that suffer and show us how to walk together towards a more peaceful and just world. Amen.