Reflecting on a 20 Year Journey 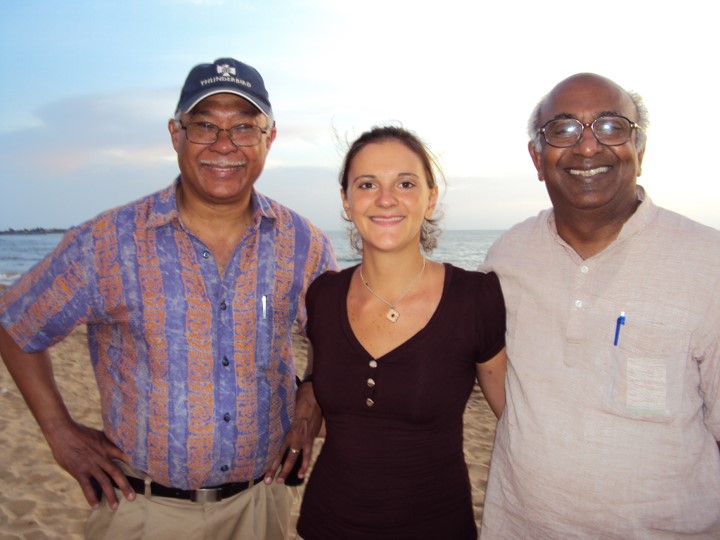 Lionel Derenoncourt with Chenoa Stock and the Rev. Thomas John in Sri Lanka.

In 1993-94, the Presbyterian Hunger Program (PHP) was drowning in international funding requests. We were receiving hundreds of requests from groups unknown to us. Dozens of applications were submitted twice a year from countries like India, Sierra Leone, Nigeria, the Philippines, and many others.

At this time, the Rev. Thomas John, while serving as missionary-in-residence with the Presbyterian Church (USA), invited PHP to look beyond the small grants that we were giving to churches and grassroots groups around the world.

The late Rev. Dr. K.C. Abraham, a theologian from India,  and Thomas John challenged the PHP advisory committee, and me (formerly the associate for international hunger concerns for PHP) to consider whether we were satisfied giving small gifts here and there, or whether developing deeper relationships with local partners would lead to a more impactful partnership.

Thomas John and some of his colleagues helped PHP to begin a relationship with some partners in South India, both to process the numerous funding requests we were receiving from the region and to coordinate what was happening locally.  The relationship helped us to verify the legitimacy of requests and the effectiveness of methodologies used. 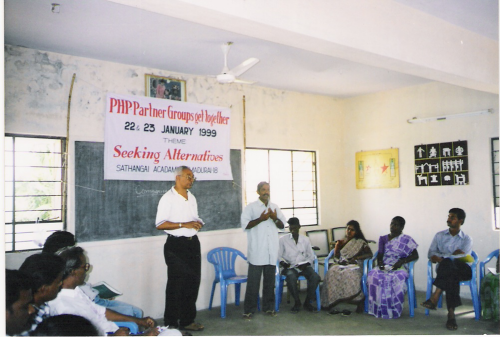 Lionel meets with partners in India in 1999 discussing how to partner in a new way.

It quickly became clear that we were on to something.  Local groups were excited to come together and discuss their projects and approaches. This allowed for the cross-fertilization of ideas, experiences and best practices. People started discussing the intersection of theology and politics and their impact on their work.

Every time I met with these local groups, I came away rejuvenated, excited and enriched.  It was clear that it was an advantage to have a network such as this.

But how could we expand on this idea?

First, we needed to understand how our current partners viewed PHP and what they expected from us beyond funding.

In numerous countries, PHP had a wide variety of partners from churches to grassroots organizations, both Christian and those of other faiths.  In 1997 PHP began conversations with and a methodical study of partners in Africa, Asia and Latin America.

We found that our partners were looking for accompaniment beyond just grants.

We also collected background information about some of the issues that we needed to address. We are indebted to the Rev Thomas John from Kerala India, the Rev Louise Tappa, from FEMEC, Cameroun and Michael Torrens, former PC(USA) mission coworker in northern Colombia for their help with this study. The study highlighted the need for a coordinated grassroots response to the ravages of globalization and the drastic austerity measures imposed by International Monetary Fund and the World Bank on developing countries.

We might just have stopped there and introduced some cosmetic changes to our existing program if there had not been a real drive for reform from within PHP and the office that was known as the PC(USA) Worldwide Ministries at the time. 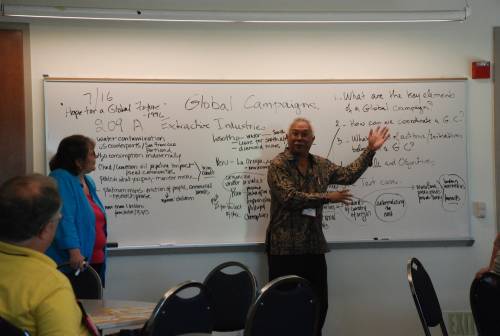 Lionel Derenoncourt and Alexa Smith challenge partners in the U.S. and overseas to be strategic in the development of global campaigns.

The Rev. Dr. Lynn McClintock (Connette) helped us define the theological underpinnings for the new approach. She eventually joined the staff of PHP and became one of the architects of this new program, instrumental in recruiting churches to participate in it. The Rev. Alexa Smith later came onto staff and helped sharpen the focus on community organizing and advocacy to help networks address specific issues.

We deliberately sought to bridge the traditional separation between social justice ministry, overseas mission partnerships and mission personnel deployment within the PC(USA) itself. This was probably one of the most difficult undertakings as we engaged colleagues from offices and divisions in the church not used to collaborating.

We benefited greatly from the input and support of the Rev. Dr. Victor Makari, of the late Rev. Jon Chapman and other World Mission area coordinators. In addition, it is to be noted that PHP itself, both in its staff structure at the time and the leadership of its program committee, headed then by the Rev. Richard Gibson, was open and excited about new ways of doing international hunger ministry.

Despite enthusiasm and assurance that we were headed in the right direction, it took over a year of conversations, meetings, negotiations and compromises within PC(USA) with dozens of drafts and rewrites before we were able to finally get the green light to start Joining Hands Against Hunger (JHAH).

In 1999, 20 PHP partners in South India came together to establish themselves as an intentional family, sharing the same philosophy of actions, planning their activities and coordinating their initiatives under the banner of CHETHANA, with the local leadership of Philip George and Partners in Justice Concerns.

By early 2000, several additional networks were started in Bolivia, Peru, Cameroun, South Africa, Lesotho and Egypt, while conversations were underway in a few more countries. Since then new networks and relationships have been established and some have ceased to exist. 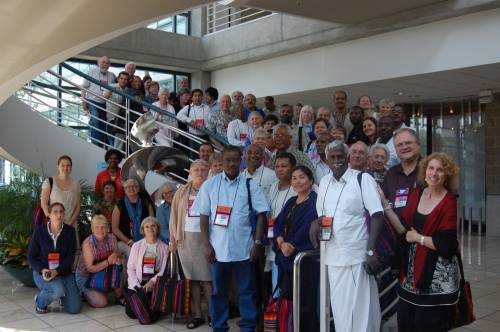 International Gathering of Joining Hands at Chapman University in 2008.

One of the most critical propositions of Joining Hands is the close accompaniment of local partners in their own efforts at combating hunger in their respective countries. The partner congregations in the United States would act through prayer and advocacy to address the issues the country networks had identified.

A PC(USA) mission worker – a facilitator – would accompany both sides in this effort. As such, a number of facilitators have left their mark and will be remembered in their countries of service: Dr Susan Ellison in Bolivia, Rev. Dr Hunter Farrell in Peru, Christi Boyd in Cameroun, Cindy Easterday in Lesotho, Nancy Collins in Egypt, Chenoa Stock in Sri Lanka and then Bolivia, Jed Koball in Peru, Cindy Corel in Haiti and many more.

Twenty years later the world scene is marked by tremendous suffering brought about by mass migration, war and social upheaval around the world.

Poverty is exacerbated by environmental degradation and climate change. Poor people everywhere are calling on our churches for solidarity and renewed support.

Joining Hands is still relevant as a program that involves people acting together in the mutual trust and commitment to ideals of justice and ministry. It is an organic structure that must evolve with the current challenges of the times.

Therefore, I wish and hope that 2020 will usher in a time of introspection and evaluations for all the participants in the JHAH program to help find a way forward that will respond to the challenges of the day and keep alive the ideals and the flame that have been burning strong since those first challenging conversations twenty years ago.