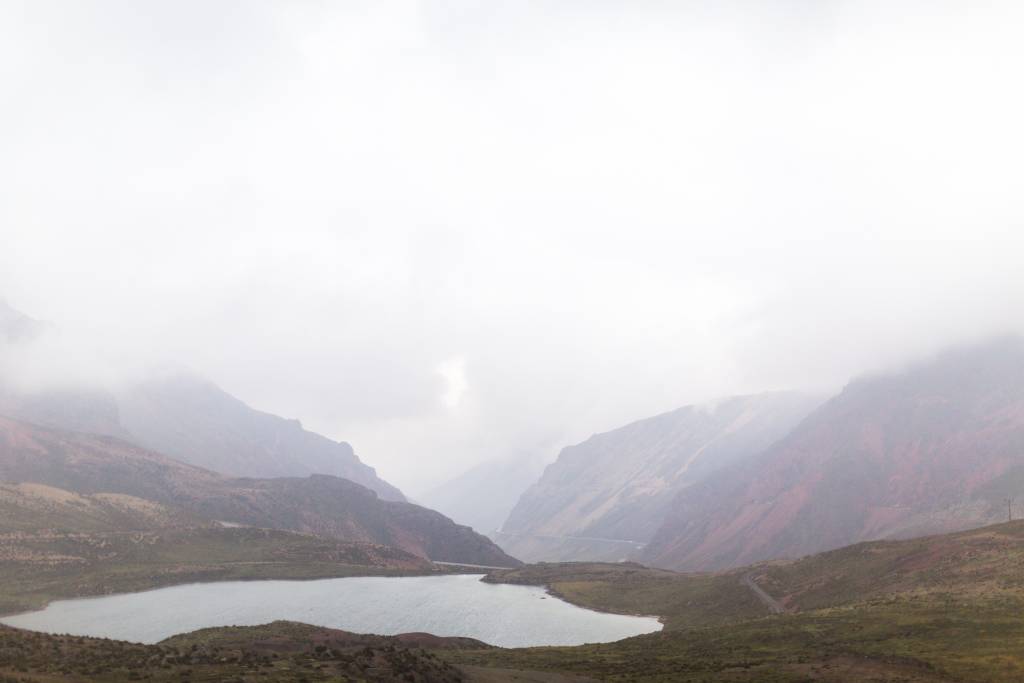 Mountain top lagoons are the main source of water for agricultural communities in the Andes, and many of them are contaminated or threatened by expanding mining activity. Photo by Jed Koball.

¨We need a change of paradigm in all our economic activities, including mining. ¨

With these words, the Peru Node of Churches and Mining publically launched its effort to motivate the universal church to stand with those affected by mining activity and stand up to the industries and states that perpetuate it.

From its formal pronouncement, the Peru Node declares, ¨as men and women of faith… we form this expression of faith with a common challenge: respond to the impacts and violations of socio-environmental rights caused by mining companies, our States and the States of origin of the companies, in the territories where we live and work. ¨

Mining has been the backbone of economic development across the generations throughout Latin America. From the arrival of the conquistadores to post-colonial democracies, governments across the region from the left and to the right continue to opt for the unbridled extraction of minerals, and more recently oil and natural gas, to stimulate the growth of its gross domestic product. 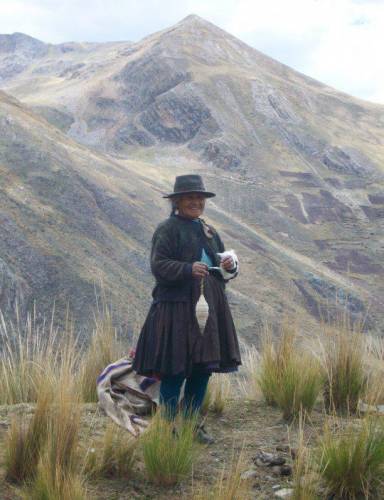 Traditional ways of life in the Andes are greatly threatened by growing mining activity that rarely benefits local communities. Photo by Jed Koball.

With the rise and fall of metal prices, so go economies.

What is rarely considered in this equation are the substantial and growing costs, namely the environmental impacts on ecosystems, human health and traditional livelihoods such as agriculture that are generated by extractive activity.

Furthermore, what is rarely observed is the presence of the Church in taking a stand against such abuses and accompanying those most severely impacted. It is this last observation that makes the October launching of the Peru Node of Churches and Mining both monumental and hopeful.

A year ago, PC(USA) global partner Red Uniendo Manos Peru (RUMP), the Joining Hands network in Peru, was invited to help form an ecumenical network in Peru that would seek to challenge the institutional church in addressing the impacts of the extractive industry while also better equipping itself in the accompaniment of communities impacted by extractive activity.

RUMP has twenty years’ experience organizing ecumenical and interfaith partners in addressing the grave injustice of widespread contamination in La Oroya, Peru due to a foreign owned metallurgical complex.

RUMP´s efforts are widely considered the first and most significant ecumenical effort addressing such injustice in Peru, making it an ideal candidate to help shape the formation of a larger ecumenical network for broader work.

In a society that sharply divides itself along Catholic and Protestant identities, and in a political context driven by mining interests, the invitation to such ecumenical and prophetic work is nothing less than daunting. Nevertheless, the initial response of the institutional church has been nothing short of inspiring.

In his opening remarks for the launching of the Peru Node, recently appointed Cardinal and Archbishop of Lima, Carlos Castillo, referenced the Latin American Council of Bishops (CELAM) which has called upon ¨churches and society to hear the cry of the people who suffer and the wounds caused to nature itself, over-consumed and undervalued by the current global economy.¨ 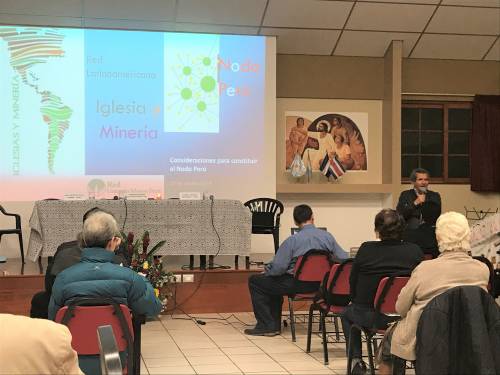 Conrado Olivera, Director of Red Uniendo Manos Peru, presents to the gathering of the Peru Node of Churches and Mining about the relevance of the Accra Confession of the World Alliance of Reformed Churches. Photo by Jed Koball.

In response, Conrado Olivera, Director of Red Uniendo Manos Peru, affirmed the historical and institutional position of the World Alliance of Reformed Churches, as he cited the Accra Confession of 2004 that states,

¨We have heard that creation continues to groan, in bondage, waiting for its liberation. We are challenged by the cries of the people who suffer and by the woundedness of creation itself. We see a dramatic convergence between the suffering of the people and the damage done to the rest of creation…The root causes of massive threats to life are above all the product of an unjust economic system defended and protected by political and military might. Economic systems are a matter of life or death. ¨

The Peru Node of Churches and Mining is initially formed by fifteen religious and ecumenical institutions, spanning catholic and protestant participation. It seeks to create awareness both within the church and society around the impacts of the mining industry; involve younger generations in the caring of creation through theological education and meaningful action; and, accompany communities directly impacted by mining activity.

Scroll down to read the full pronouncement of the Peru Node of Churches and Mining:

“WE NEED A CHANGE OF PARADIGM IN ALL OUR ECONOMIC ACTIVITIES, INCLUDING MINING”

Mining activity concessions cover 14% of the national territory, and mining activity itself has accounted for 9% of the GDP in recent years as well as a significant percentage of exports. By political decision it is an important foundation of the economy in Peru, based on international mineral prices.

However, in recent years mining has also generated the greatest amount of social conflicts, representing 65% of the socio-environmental conflicts in the country, which in particular affect the rural communities of our Andean and coastal regions, where 35% of the territory has been concessioned for mining activity. 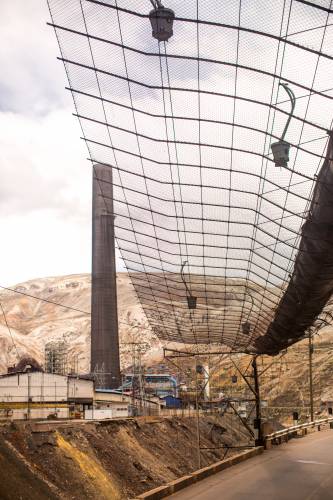 The main chimney of the metallurgical smelter in La Oroya, Peru, continues to emit tons of toxins into the air, continuing to make the locale one of the most contaminated places in the world. Photo by Jed Koball.

The imposition of decisions made to facilitate mining activity in Peru, lack adequate mechanisms for citizen participation and prior consultation with our native peoples, as well as a solid institutionality that guarantees rigorous approval of environmental studies or adequate supervision of operations.  This imposition has generated socio-environmental conflicts, which are approached by the State with “dialogue” processes that seek to facilitate activities before “listening”, or that generate agreements that are not fulfilled, leading to the outrage of people who do cannot find channels to express their demands, and whose protests are met with repression and criminalization.

According to the Technical Table of “Comprehensive Health Care and Prevention Policies for those affected by toxic metals associated with mining and hydrocarbons”, more than 7 thousand people are contaminated by toxic metals in our country, in particular by the mining environmental liabilities generated by the operations that affect water, air and soils, also polluting the production of economic activities fundamental to our food, such as family farming.

Our Churches are not foreign to ” looking through the eyes of the poor and those who suffer”, as the Bishops of the Latin American Episcopal Council (CELAM) cite, and “call the Churches and society to hear the cry of the people who suffer and the wounds caused to nature itself, over-consumed and undervalued by the current global economy ”,“ which permits an unjust economic system defended and protected by political and military force. “

In this regard, the Accra Confession of the World Alliance of Reformed Churches emphasizes that “The greedy interest of exploiting Mother Earth to the last drop leads to drastically transforming landscapes, cutting down forests, diverting rivers, tracing roads, destroying the vegetation layer, and finally, generating a series of impacts that deserve to be evaluated from an ethical and moral point of view in dialogue with the sciences ”.

That is why our Churches have joined the call of the Latin American Network of Churches and Mining to form a Peru Node, in order to “reflect, share, celebrate and generate paths that allow us, in fidelity to the gospel of Jesus Christ, to accompany the people who feel threatened and doomed to the destruction of their livelihoods and to the denial of a dignified future, in open contradiction and tension of the fulfillment of life proclaimed by a Christian worldview ”.

As men and women of faith, Bishops, Presbyters, deacons, pastors, consecrated persons, lay people, pastoral teams, religious communities, theological reflection groups, evangelization centers, we form this expression of faith with a common challenge: respond to the impacts and violations of socio-environmental rights caused by mining companies, our States and the States of origin of the companies, in the territories where we live and work. 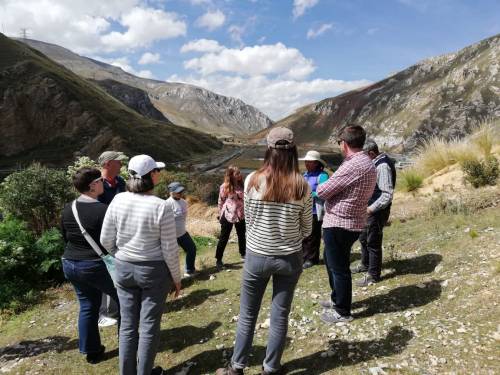 Red Uniendo Manos Peru has been a leader in organizing ecumenical action in the defense of communities impacted by mining activity. Here a leader from the local catholic parish in La Oroya speaks with a visiting group of Presbyterians about underground waste deposits from the metals smelter that seep into the river. Photo by Conrado Olivera.

It is fundamental for our objective to recover the perspective of Jesus Christ, who considers everything created with “a holistic and interconnected web” that recognizes people as an integral part of nature, “that is the perspective of integral ecology to which Pope Francis summons us in the Encyclical Laudato Si, inviting us to have the same sentiments of Jesus Christ. ”

We question the role that the so-called “theology of prosperity” plays today, which imposes the idea that we must take advantage of the natural resources we have, to achieve financial and physical well-being through our own material wealth, strengthening the market economy. It is this anthropocentric perspective of “happiness”, that seriously impacts the search for the common good, as posed by the Social Doctrine of the Church, and leads us towards the self-destruction of our “common house.” The ecological crisis that we live, calls us, “to a deep inner conversion”, that demands a true “ecological conversion” of our own Churches that have distanced themselves from the creative project of God, to promote a change of paradigms, a new way of life, to rescue the essence of “being a Christian today” as a “sign of contradiction.”

“The integrity of our faith is in danger if we remain silent or refuse to act against the current system of neo-liberal economic globalization,” the Accra Confession tells us.

We believe that a central role in the “conversion of the church” and of achieving a “sending” church is in the generations to come, that is, in the young people. ”That is why the issues of the next generations, their relationships and the promotion of young people are not an accessory but central to the revelation. If the Church had not taken it into account, faith would not have reached any of us. ”

Finally, as Pope Francis has expressed to the Popular Movements in Bolivia, “the future of humanity is not only in the hands of the great leaders, the great powers and the elites. It is fundamentally in the hands of the people, in their capacity to organize themselves; and, it is in their hands to water this process of change with humility and conviction. ”

The Peru Node of the Latin American Churches and Mining Network, presents itself publicly to unify our Churches around the defense of the common house, in “the perspective of a paradigm shift in all our economic activities, including mining”, and with the search for true common good, as our Christian communities once lived, as our native peoples do today, putting everything in common.

The Peru Node of Churches and Mining is formed by representatives and members of the following institutions: