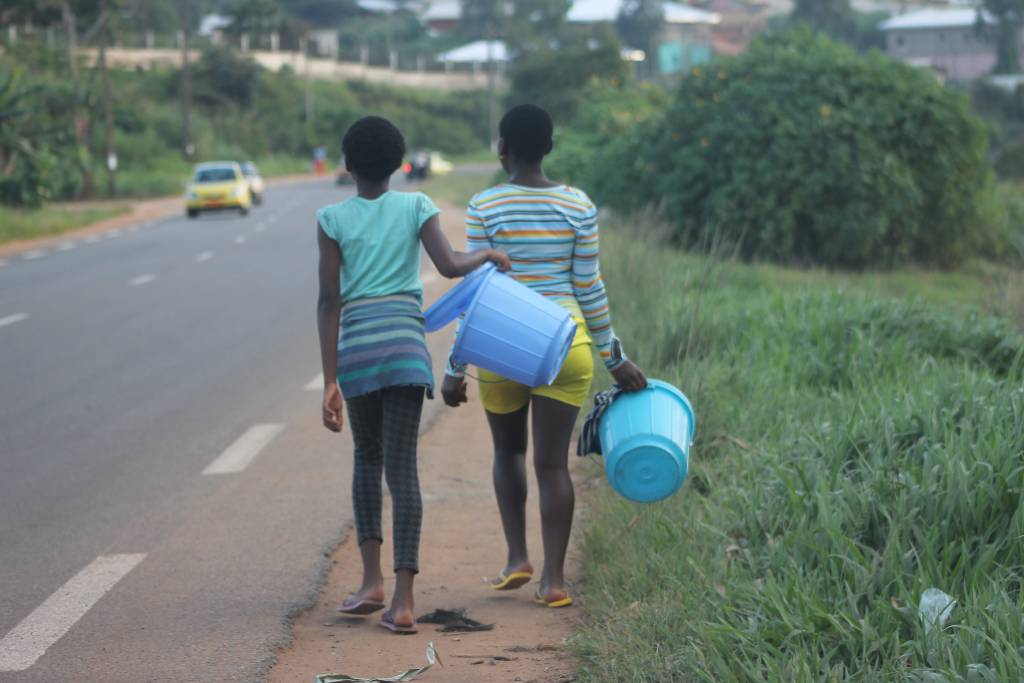 Two girls carry buckets along a roadside in Bamenda in the Anglophone region of Cameroon. Photo by Valery Nodem.

The “Anglophone Crisis” in Cameroon has morphed into an armed struggle. Over 2,000 people have been killed and over half a million people have fled to other cities within Cameroon or foreign countries including Nigeria and the United States.

The internally displaced persons (IDPs) in Cameroon, especially in the cities of Douala and Yaoundé, have been enduring the burden of the Anglophone Crisis in many ways.

In armed struggles, normative metrics are often used in the form of battle deaths, logistical sustainability, and the capacity and viability of the insurgent and counterinsurgent state to measure success. What is often left out and unseen, yet is a devasting part of the armed struggle, is “collateral damage” or unintended results.

RELUFA, the Joining Hands network in Cameroon, has been monitoring this conflict and its impacts on hunger and poverty. This article highlights one part of this “collateral damage” by showing how this conflict has prevented people from meeting their basic needs and pushed young girls into prostitution as a consequence.

This effect on women and young girls re-inscribes existing discrimination and increases poverty and hunger. Based on a series of interviews conducted by RELUFA staff in July of 2019 in Douala, Cameroon, the report focuses on young women between the age of eighteen and twenty five, but speaks to women generally beyond this demographic.

Two young ladies Lucia and Nadege, in their early twenties fled from the North West region to Douala in 2019. Escaping violence, each girl found herself turning to prostitution.

Lucia was separated from her siblings in the bush in Bamenda, left her mother behind in the village, and was unable to finish her last two years of university because of insecurity. She has been living with Anglophone friends in Douala and life has not been easy for them due to lack of food, housing difficulties, and challenges securing a good job with no diploma.

On the other hand, Nadege had already completed her degree, worked at a call box (phone cabin), and enrolled in a computer program in Bamenda. When the crisis escalated, she had to stop her program and her business. Her family house was burned in February of 2019 and she lost her brother to the violence. Because her family could not afford accommodations, Nadege does not live with her siblings. Instead, she lives with a friend.

As a result, of these hardships, both Lucia and Nadege have turned to prostitution to survive.

Upon arrival in cities like Douala and Yaoundé, many women just like Lucia and Nadege find themselves structurally deprived of access to resources, which affects their ability to cope. Many Anglophone Cameroonians have lost family, including parents, extended family, and siblings. This loss removes a safety net for financial and emotional support.

Due to these factors, many young women find themselves turning to prostitution[1] to provide for themselves, their younger siblings and family. For those who turn to prostitution, each client usually pays 1,000 CFA ($2.00 USD).[2] Because sex work is illegal yet tolerated, many women find themselves paid on the lower end and exposed to sexual and gender-based violence, which has serious psychological and health implications and risks of HIV/AIDS.

Even though “collateral damage” is not always a visible part of war in the mainstream literature on armed struggles, one of its very real consequences is young girls and women being pushed into prostitution due to poverty and hunger. Vulnerable to sexual and gender-based violence as well as sexually transmitted diseases and infections, these women struggle psychologically, socially, and politically to assert themselves into a new social space. This is why it is important to strengthen the safety net for IDPs to enable successful coping, survival, social mobility and stability.[3]

Take Action to end the violence in Cameroon!

Read the Stated Clerk’s Call to Prayer for Cameroon!

Give to the Presbyterian Disaster Assistance account DR000168 to  support for Cameroonian IDPs and refugees. Please designate your gift for “Humanitarian Assistance Cameroon.”

[1] The minimum monthly wage in Cameroon is 30,000 CFA or roughly $60 USD.[1] The average cost of living in the city with no dependents is between 70,000 – 80,000 CFA. If women arrive with children or dependents, to live comfortably with all of your needs met the cost per month significantly increases.

[2] The high end is 25,000 CFA and above per clients who have more money, but the earning potential is rarely reached.

[3] One example of support is from the Divisional Delegate of Women’s Empowerment and Family for the Wouri. Bena Ewombe Hortence Berthe Kingue has lead different programs to train sex workers on income generating activities and from time to time. They also organize sensitization programs to inform prostitutes on dangers of their activities to their health and society as a whole.