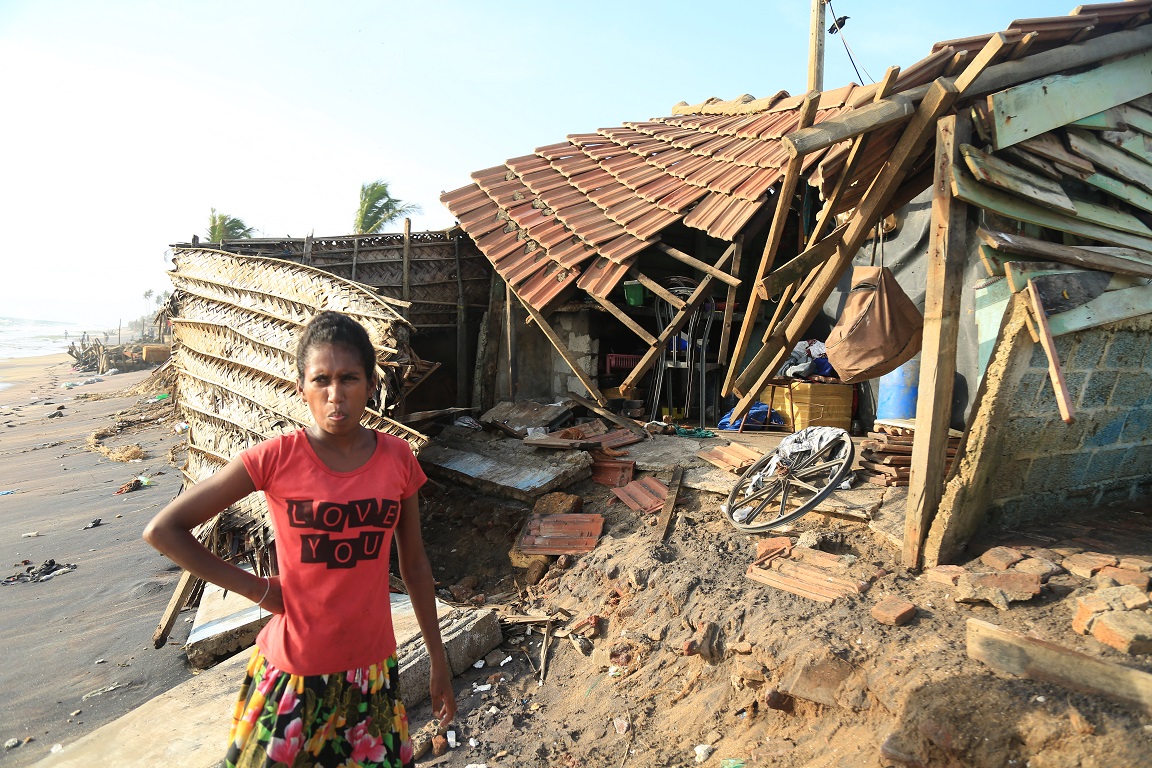 Jessica Bernadeth stands in front of what remains of her home. Photo by Prasad Purnimal.

The Sri Lankan Government’s Port City project is well underway.  The project, carried out in partnership with the China Communication Construction Company (CCCC), extends the city of Colombo onto a man-made island, creating a business and tourism district.

In order to build the Port City island, the CCCC is mining sand off the coast of Negombo, a major city north of Colombo. Sand is dredged from the sea bed and transported to Colombo to build up the coast there. The coastal areas where the sand is dredged then become susceptible to coastal erosion.

Already, the houses and fishing huts of at least 100 fisher families have been washed away up the western coast from Negombo to Udappuwa due to coastal erosion.

Jessica Bernadeth of the Pitipana Weralakanda village says, “We have been living several generations in this fishing village and the sea was a bit far from our land. We were able to live a peaceful and decent life. However, just after the sand mining for the construction of the Port City, the sea is now at the edge of our land. Now everything we earned in our life has been destroyed. We are scared to sleep in the night, because the sea is next to our home. We lost our toilet, now the wall of the home is about to wash away. Who cares for our lives?”

The People’s Movement Against Port City (PMAPC) has been campaigning against the project since 2014. The PMAPC is an alliance of fisher community members, coastal communities, fisher organizations, women in fishery communities, environmentalists, religious leaders, lawyers, professionals and civil society organizations.

The current Prime Minister Ranil Wickremesinghe, while campaigning for office, had acknowledged the danger that the Port City posed to coastal communities and promised the PMAPC that he would put a stop to it if elected. However, once in power, after a temporary halt to the project in 2015, he chose to instead move forward with the project, even increasing the land area of the Port City from 230 hectares to 264 hectares.

Maria Celin, another woman from the village of Weralakanda urges that, “Now, the government authorities should take immediate action to prevent sea erosion by stopping the sand mining and laying stones along the coast to prevent sea erosion. Otherwise, in the near future, many families will have to vacate our lands where we have been living for four to five generations.”

Subashinie Kamalanathan, Convener of the PMAPC, declares, “When one City was built, several cities were destroyed.” 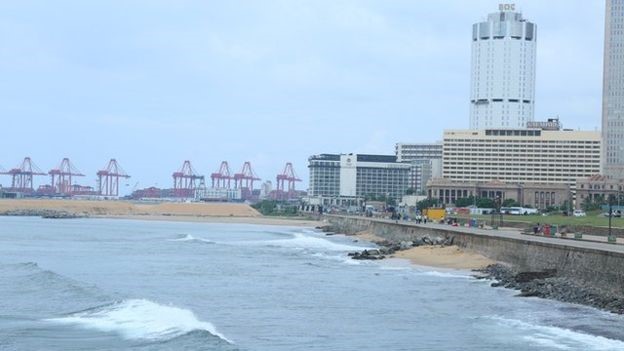 Not only are homes being destroyed, but livelihoods are being destroyed. Fisherfolk need the sea coast for their fishing activities. They need the anchorage points to park their boats and spread their nets to dry after the daily sea trip. On top of, fisher women need the coast to process and dry the fish caught daily.

“Where do we do our dry fish production after this? We lost our coast. This is was an added income for me which was my contribution to the family. I used to earn some money and saved for the dowry of my daughter and school expenses of my son. This gave me some status within the family as a woman that I could contribute economically to my family,” says fisherwoman Maria Jessica

Jinadasa Katupotha, an eminent professor of Geography, has been working with the PMAPC to scientifically document the potential long-term impacts of the sand dredging. Professor Katupotha says, “The sand deposits have been formed during millions of years.  Once those deposits are removed from the sea, there is a vacuum. To fill the vacuum, sand flows from some other area. Once the sand is mined from a particular place, the balance is damaged. According to our survey team, there is sea erosion taking place seriously along the Kalpitiya coastal belt. Although the Sri Lankan map will expand by a few hectares of land due to construction of the Port City the possible loss of land from the map could be severe.”

Praja Abhilasha (PA), the Joining Hands network in Sri Lanka, is committed to working side by side with communities that are impacted by land grabbing.  The PA has been organizing, mobilizing and campaigning to support the efforts of the PMAPC to fight for the rights of coastal communities to the land, sea and livelihoods.