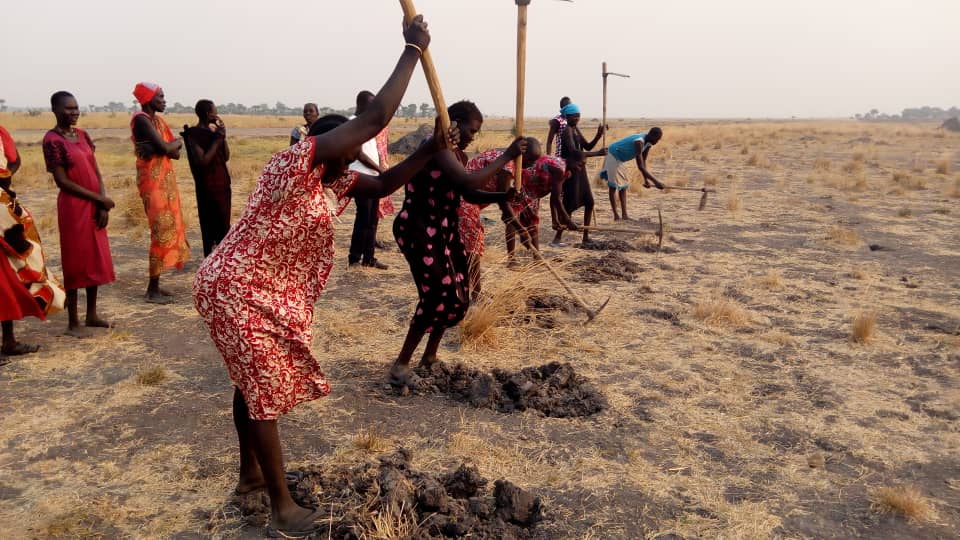 South Sudan is a very new country, gaining independence in 2011, after three decades of civil war between northern and southern Sudan.  Unfortunately, South Sudan’s independence did not lead to peace. By 2013, civil war erupted between different factions within South Sudan and continues today.

According to a 2018 report, between the end of 2013 and early 2018, close to 400,000 people died as a direct result of the conflict there. In that time, two-million people were internally displaced and another 2.5 million had become refugees.

In 2017, the U.N. declared a famine in parts of South Sudan, with 100,000 people experiencing starvation there and another one million on the edge of starvation.

In 2018, the Presbyterian Hunger Program (PHP) started a relationship with an organization called Hope Restoration South Sudan (HRSS) with the hopes of working together to help vulnerable communities in South Sudan improve food security and empower women and girls through farming.

Valery Nodem, the PHP International Associate for International Hunger Concerns says, “When famine was declared in South Sudan, we wanted to help and reach the people who were the most affected. We contacted HRSS because it was one of the few organizations working in Leer and Mayendit counties, the epicenters of famine in the country. In a few years, the organization has managed, with limited funding and staff, to implement programs that have impacted more than 50,000 people. We also liked their approach to development that tackles short, medium and long-term needs.”

Angelina Nyajima is one of the founders of HRSS. She, like those she now serves, has a painful story, but her story is also a story of hope in the face of adversity.

In 1987, Angelina’s family fled to Ethiopia to escape the civil war violence between the north and south of Sudan. Angelina’s brother was taken by force by the Sudan People’s Liberation Army (SPLA) to be a child soldier in what was called the Red Army. 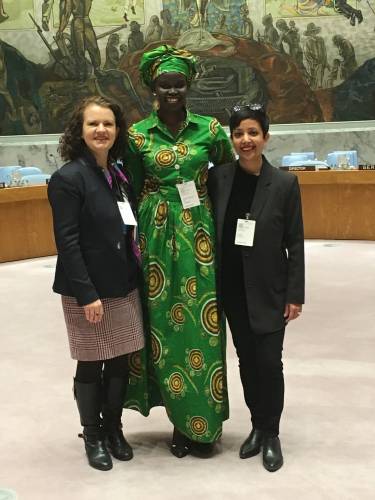 Angelina Nyajima on the floor of the United Nations Security Council on March 8, 2019

When her family finally reached Ethiopia, they were met with civil war erupting there as well. In 1992, they became refugees in the Kakuma refugee camp in Kenya. In 2001, Angelina was adopted by a Kenyan family only to be devastated by a car crash which killed her adopted father and injured horribly her adopted mother. And her biological father died from asthma in 2003 due to lack of access to asthma medications.

Without a family to take care of her, Angelina managed to finish high school, paying her bills by modeling. She even landed a small part in the movie The Constant Gardener which helped her pay for her degree in International Relations and Diplomacy in 2005.

In 2009, Angelina went back to South Sudan to work as a teacher and soon after decided she wanted to do something to give back to her community. She co-founded HRSS in 2010 to mobilize communities to determine their own development and secure their rights to live dignified lives.

PHP is supporting work through HRSS this year to provide women and girls seeds and tools, and training in farming, record keeping, food processing, post-harvest management and gender-based violence prevention.

Angelina says, “We need women to be put at the center.”

South Sudanese women are typically in charge of securing food for the household. As women are obliged to travel further and further into remote locations in search of food and firewood for the family, they often encounter gender-based violence on their journey. Providing women with access to land and the necessary tools and skills to produce food at home liberates them from many of the safety risks posed by food insecurity.

Angelina draws inspiration from Wangari Maathai, the 2004 Nobel Peace Prize winner, who founded the Green Belt Movement in Kenya which planted over 51 million trees there. Angelina says, “If she has done this, then I can do something even better.  Even if I’m not able to finish, someone can pick it up from where I left off.”

PHP provided HRSS with a small grant compared with funding that they have received from the United Nations. Angelina says, “Something small always births something big!”

You can support PHP’s work in South Sudan and other countries experiencing famine and extreme hunger by giving online and noting that your gift is for “extreme hunger and famine”.

Please pray for South Sudanese women who risk the safety of their own bodies every day to feed themselves, their families and their communities. “Blessed are the peacemakers, for they will be called Children of God.” (Matthew 5:9) Let us join our South Sudanese sisters in doing our small part to spread peace in ourselves, our families and communities – and to help birth something big in the world.