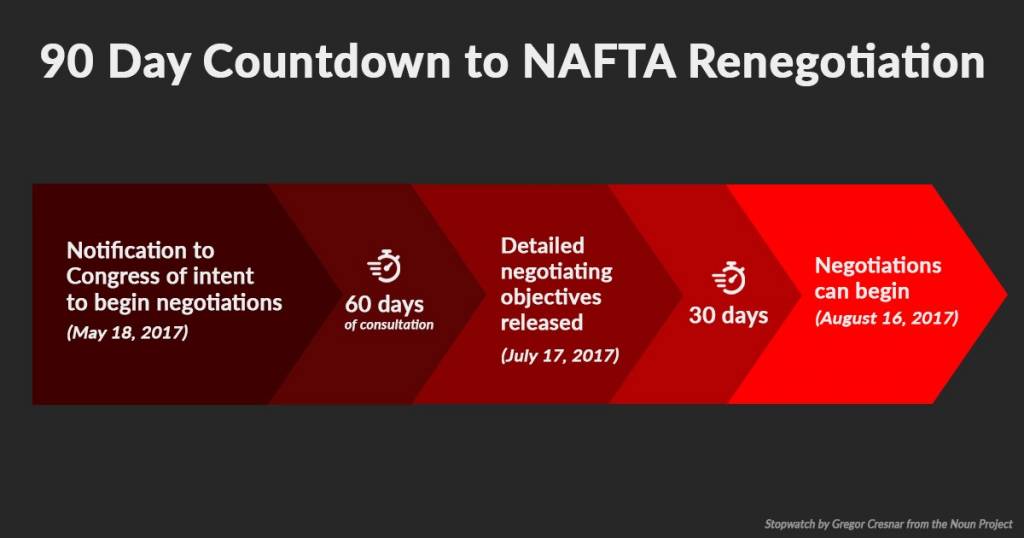 The U.S. Trade Representative is currently accepting public comments on how it should renegotiate the North American Free Trade Agreement (NAFTA).  Submit a Public Comment Now!

Please demand that any NAFTA replacement deal prioritize the needs of working families and healthy communities over corporate profits and eliminate the investor-state chapter (ISDS).

It’s time for each of us to speak out.  The public comment period closes on June 12th.

On Thursday May 18th the Trump Administration made good on its promise to renegotiate NAFTA by notifying Congress of their intent to begin negotiations.  As the graphic above indicates, this begins the 90-day clock before negotiations can begin.

Citizen Action groups tell us that this period is our best opportunity to have an impact on shaping the negotiations by contacting our legislators to demand that any renegotiation of NAFTA must put human needs ahead of corporate profits in all three countries.

Specifically, the Investor-State Dispute Settlement (ISDS – Chapter 11 of NAFTA) mechanism of the agreement must be replaced or eliminated in order to protect democracy and human rights. ISDS gives foreign investors enormous privileges making it easier for corporations to offshore jobs and attack the environmental and health laws on which we all rely.

The Church has witnessed the impact of ISDS within the U.S.-Peru Free Trade Agreement on its partners in La Oroya, Peru where residents have suffered from lead poisoning at the hands of a US investor-owned metallic smelter. The corporation was empowered under ISDS to demand “compensation” from the government of Peru when environmental regulations were enforced.

“[The General Assembly of the Presbyterian Church (USA)] demand[s] that all trade agreements incorporate workers rights, human rights, food safety, and environmental standards, and that they allow governments and sovereign indigenous peoples to regulate corporations to protect the common good (Minutes, Part I, 2003, p. 618).”

Eliminating the ISDS system is the most important change that needs to occur, but not the only one.  NAFTA, like the Trans Pacific Partnership, was negotiated behind closed doors with hundreds of official corporate advisors, but almost no input from civil society groups like labor, faith, environmental, and representatives from family farms or small businesses.  We need to demand that ALL members of society have equal representation in the negotiations.

These two changes would make an enormous difference, insuring that the agreement has a fighting chance of being a deal that works for our families and our communities, instead of being another giveaway to investors and Wall Street.

There are other important changes that would further strengthen the agreement and are advocated by labor, family farm and environmental groups, which you can read about in the links below.  But the time is NOW to submit your public comment to the U.S. Trade Representative and contact your legislators and let them know that any agreement that includes the investor-state dispute resolution system is a dead deal!