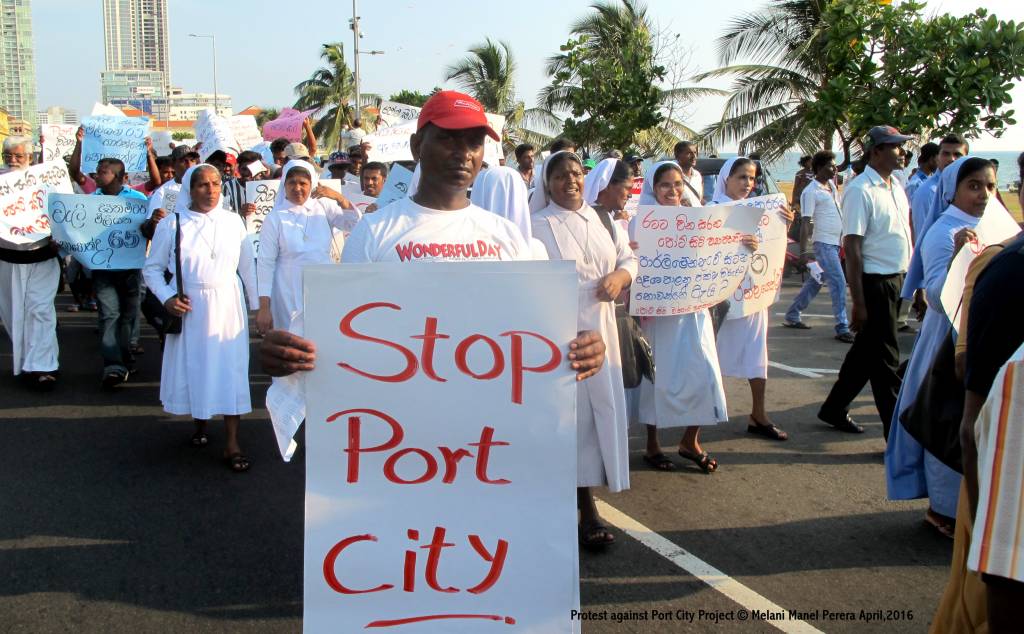 The Sri Lankan Government, in partnership with the China Communication Construction Company (CCCC), is moving forward with its plans to build a Port City, a business and tourism district that extends the city of Colombo onto a man-made island.

The government promises that the Port City will grow economic development in Sri Lanka, however, many coastal communities are suffering from the destruction of ecosystems and livelihoods in the wake of the project.

The project is mining sand off the coast of Negombo, a major city north of Colombo, for the purposes of building the Port City island. The project is dredging the sea bed to collect 60 million cubic meters of sand, which is nearly 16 billion gallons.

In the dredging process, coral reefs that serve as vital fish breeding and feeding grounds are being scraped from the sea bed along with the sand, devastating the underwater ecosystem. Coral reefs serve as important buffers for coastlines, protecting from storms and erosion.

“Areas of the Negombo seacoast have been washed away with the sand mining that has led to sea erosion. Some houses are in danger. As we know, the coastal areas are very delicate, sensitive ecosystems are destroyed even with a small damage to the environment,” says Marcus Fernando, the chairperson of Negombo Lagoon Fisher People’s Organization.

Further, livelihoods of the coastal communities, particularly the small-scale artisanal fishermen are at risk. Not only will the sand mining negatively impact the fish population, but fishing will be banned for at least 3 years in the mining areas.

There are a number of issues raised by the People’s Movement Against Port City as problems with the Port City project.  With the agreement between CCCC and the Sri Lankan Government, the island which CCCC will construct will be owned by CCCC. This of course poses serious threats to National Sovereignty for Sri Lanka. Economically, this project is driving up land prices in Colombo making it even more difficult for the poor to secure housing. And, as mentioned earlier, fisher people are currently facing serious threats to their coastal environments. Some villages are already encountering serious sea erosion.

The Negombo Lagoon is separated from the sea mining area by a narrow sand belt. It is only a matter of time before severe sea erosion takes place and erodes the sand belt, merging the Lagoon with the Sea.

Government authorities have promised 500 million LKR ($3.3 million) as compensation for 10,000 registered fishermen while more than 30,000 fishermen live in the Gampaha district alone in the western coast of Sri Lanka. If compensation is to be calculated, it should cover the lifetime cost of the fishing income and direct food sustenance cost. But with the promised allocation, fishermen would receive ony 4 LKR ($.25) per day. 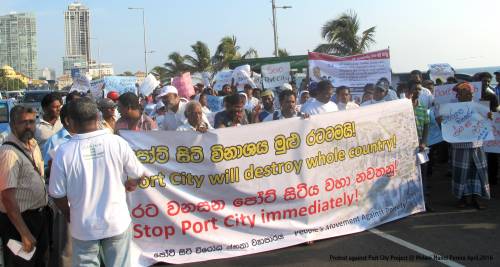 “We do not trust the compensation at all. It divides people and there has been no reliable compensation scheme for the victims in the country during the past. It is an illusion and we need to educate fishers. Those who expect any compensation, will not come forward for action against the destructive projects,” says Chinthaka Rajapakse, Coordinator of Movement for Land and Agriculture Reform [MONLAR].

The Joining Hands network in Sri Lanka, Praja Abhilasha, is committed to supporting people’s movements that address land grabbing in its many manifestations. Praja Abhilasha has been organizing, mobilizing and campaigning to support the efforts of the People’s Movement Against Port City.

“We want to build up a strong people-based Solidarity Movement to face the challenges of the Port City destruction.  Not only fishermen, but also all the possible development victims should be brought forward and let them lead the struggle against neo-liberal economic policies of the country. We have the courage, as well as the experience of the fight against Sea Planes. We, the women, will take the lead to unite the oppressed victims,” said Subashinie Kamalanatha at the People’s Movement against Port City campaign core team meeting.

The movement is slowly building again and the devastation is spreading rapidly. But, we trust that people, when united, cannot be defeated.