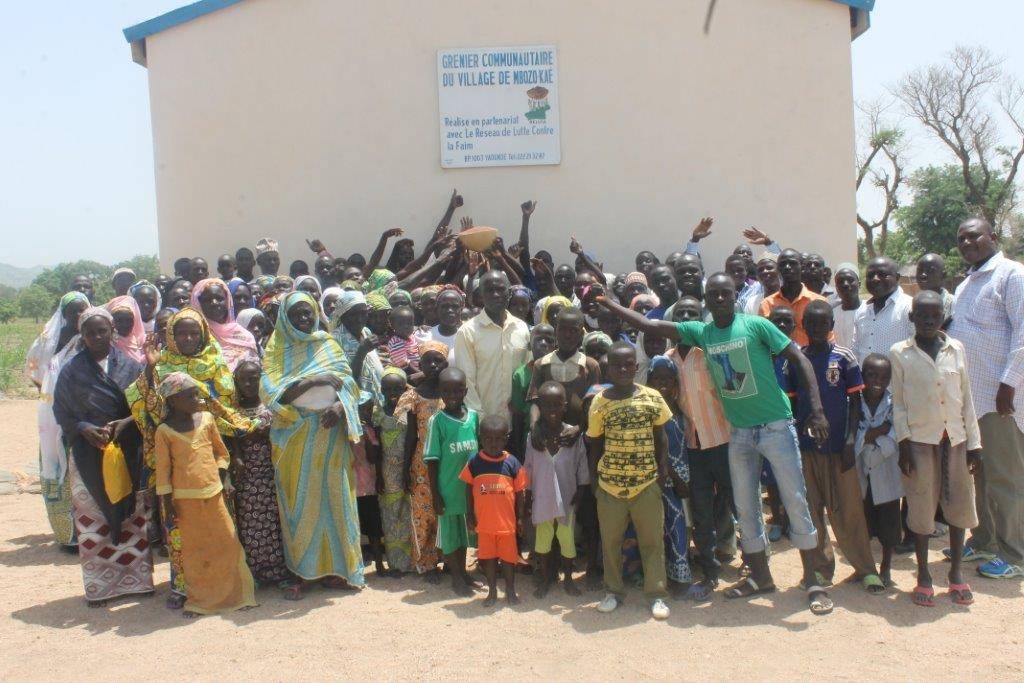 Villagers pose in front of the community grain bank in the Mbozo Kai village in the extreme north of Cameroon. Photo Credit: Jaff Bamenjo

For several decades, food insecurity and hunger have been a major concern in the extreme north region of Cameroon. The food insecurity situation has been attributed primarily to erratic rainfall, the semi-arid Sahel desert climate, rocky topography in some areas and inadequate food storage facilities.

Hunger is widespread during the lean period that generally occurs annually between June and September and many families find it difficult to afford even one meal a day.

However, since 2013, the situation has been further aggravated by the insurgency of the militant Islamic group Boko Haram. Boko Haram has been terrorizing the northern region of Cameroon in its attempts to establish an Islamic caliphate there and in Nigeria.

Boko Haram’s terrorist activities in Nigeria have prompted an influx of refugees fleeing violence into northern Cameroon. As a result of these atrocities, around 60,000 refugees and 100,000 internally displaced persons (IDPs) are currently living in the northern region of Cameroon. The presence of large populations of refugees and IDPs in villages in northern Cameroon has placed enormous pressures on the availability of food, water and firewood as well as placed upward pressure on the price of daily goods.

Boko Haram militants have been in search not only of hostages, but of food and livestock to feed their “army.” This has further aggravated food insecurity and hunger in the extreme north of Cameroon.

Back in 2006, supported by the Presbyterian Disaster Assistance (PDA) and the Presbyterian Hunger Program (PHP), RELUFA, the Joining Hands network in Cameroon, together with some local communities in the extreme north initiated a community grain banks program with the aim of addressing recurrent hunger problems in the villages there.

In July 2016, the Presbyterian Church USA assisted 5 more villages affected by food insecurity in the extreme north region of Cameroon through the allocation of 250 bags of maize grains. Additionally, two grain storage facilities were constructed and provided to two communities. It was with a lot of euphoria that the populations of these villages came out to receive these gifts in the presence of Valery Nodem, Coordinator of the Joining Hands Initiative accompanied by the RELUFA Coordinator.

The community grain banks can serve as an important social safety net against food insecurity. Most humanitarian agencies and government programs focus on emergency responses. Providing food to those in dire need and during emergencies is necessary, however, addressing the root causes of hunger and poverty is important.

Food insecurity and hunger has always been an issue in the extreme north, prompting the government and humanitarian agencies to deliver emergency food assistance every year. RELUFA believes that community grain banks can serve as an important alternative to food distribution. RELUFA plans to continue engaging government authorities and other stakeholders to develop long-term strategies that address food insecurity and hunger in the extreme north region.


One Response to “Addressing Food Insecurity through Community Grain Banks”