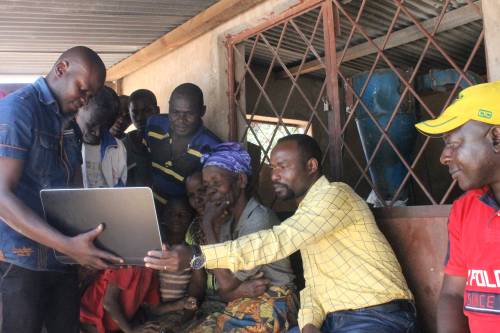 Ibond Rupas A’nzam shows community members the trailer of a documentary that POM has made that documents their grievances and hope after being displaced from by a mining company. Photo Credit Valery Nodem.

The mining sector is so far the main driver of economic growth in Democratic Republic of Congo (DRC). The mining code and mining regulations issued in 2002 and 2003 respectively attracted a large number of private investors, particularly in the Copperbelt region of Katanga among which Frontier mining company, one of Eurasian Natural Resources Corp (ENRC) mining projects.

POM organized in Sakania, the main city of the territory where is located the Frontier mining site, a workshop to present the report and the documentary. The workshop gathered local communities’ members, local civil society organizations, local state authorities and the representative of Frontier mining company.

All participants appreciated much the dialogue framework offered by the workshop. They said it was the first time that a workshop involving all stakeholders was organized in Sakania around the monitoring of the obligations of the mining company Frontier.

The documentary did not leave anyone indifferent to the hard living conditions faced by the Kimfumpa relocated community. Communities and civil society members pointed out the fact that the company did not respect the law and its commitments. They also criticized the inability of the national and local authorities who have up to now remained insensitive to the cries of distress of relocated families. For communities, they rely on NGOs including POM to make their voices heard by decision makers.

Meanwhile the Sakania civil society recognized some social achievements mad by Frontier to the benefit of local communities including the city of Sakania. However, they believe that much remains to be done particularly about the community consultation for all social projects in order to define by consensus the community priorities and also about the amelioration of conditions in the Kimfumpa village where relocated families live. These families lack everything, including drinking water, topsoil, medical and school structures. Civil society and community members called the state to monitor social obligations of Frontier while challenging the company to more responsibility.

The exchanges were conducted so that all participants express themselves peacefully and in mutual respect, to the great satisfaction of all. Finally, participants expressed the need to restore and maintain the contact between Frontier and local communities to create a permanent dialogue framework. They also asked POM to sustain facilitating such exchanges.