A pandemic of racism

Preaching the gospel during the coronavirus 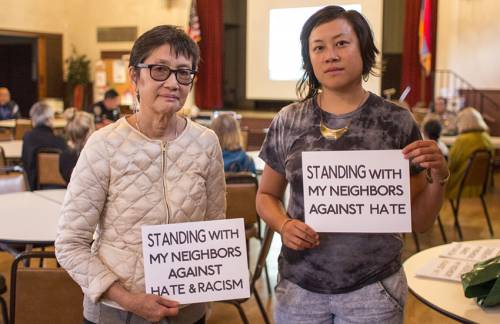 In early March, a car drove up to me and the driver screamed, “Coronavirus.” I wasn’t alone. Other Asian co-workers at the Presbyterian Mission Agency in Louisville have experienced harsher harassment during their commute. A female Asian experienced racial and hate speech from three different people in a single morning — an ugly concoction of sexism and racism.

Our experiences are not anomalies. According to a report from San Francisco State University’s Asian American Studies Department, more than 1,000 discriminations against Asian communities were reported between January 28 and February 24.[1] I now pay more attention to my surroundings when I make food runs to Walmart. As the drastic, but necessary measures of social distancing lengthen, anti-Asian racism will increase. Violence follows at the heels of racial slurs and hate speech.

In an Instagram post, now deleted, the University of California Berkeley Health Services comforted students and faculty by saying xenophobia, bigotry and bias are “normal” and “common” response during this anxious time of coronavirus outbreak. That normalizing of racist reaction is itself a “common” racist practice of essentializing a historical process of indoctrination. This discrimination against Asians was weaved through pseudo-science. Merlin Chowkwanyun, historian and assistant professor of sociomedical sciences at Columbia University, says, “Historically, in both popular and scientific discourse, contagious disease has often been linked, in a blanket way, to population groups thought to be ‘outsiders.’”[2]

Associations between germs and immigrants have always been America’s rationale for immigration restriction. Chowkwayun points out that Haitian immigrants in the early days of the HIV epidemic were targeted as “high risk” because of their nationality. And of course, the worse flu epidemic that killed millions was pegged as “Spanish Flu” which led to news reports, such as a Forth Worth Record’s article in July 1918 warning about a Spanish passenger liner arriving at an Atlantic port with the headline “Spanish Influenza Is an Undesirable.”[3] The irony is that the first case of that lethal flu was from an army cook at Camp Funston in Kansas.[4]

When President Trump refers to the virus as a “foreign virus” and a “Chinese virus,” he is, unfortunately, tapping into a mindset that is the default operating system in America. President Chester A. Arthur signed the Chinese Exclusion Act of 1882 that banned the immigration of Chinese laborers to the U.S. for ten years. The purpose of the act was to “placate worker demands and assuage prevalent concerns about maintaining white ‘racial purity.’” The anti-Asian racism now surfacing is an old virus that has been infecting our speech, behaviors and systems

The church has an opportunity to be Jesus that confronts the dangerous virus of racism by creating a “social distancing” of such behavior. Because Jesus who prays for the forgiveness of the Pharisees at the cross also calls them out as “hypocrites” and warns against the yeast of their hypocrisy. Because racist behaviors spread if nothing is done to stop them. The church can isolate such hatred by speaking against it clearly, unwaveringly and continuously. If we remain silent, we condone it. If we cease to call it wrong, then we normalize it. It is not cancellation of racists, but a cancellation of racist remarks and behaviors.

Local churches are thick communities. So even as it takes place virtually, it is a community that will meet regularly and seeks behavioral cues from each other. The pastor must not shy away from this privilege. The pastor must keep informing congregants of the latest facts about COVID-19. At the same time, the pastor must also preach the gospel and rewrite the racist operating system, so fear is replaced with faith, hoarding with sharing, hatred with compassion and the dangerous binary of clean and unclean is overwritten by the powerful all-people-encompassing label of “children of God.”

In a volatile and hostile situation where a child of God is being attacked for her racialized identity, a single voice of dissent from a white person can diffuse the situation. There are times when a word can give life or destroy it.

How are you preaching the gospel?

Samuel Son, a minister in the PC(USA), is the manager of diversity and reconciliation at the Presbyterian Mission Agency.