Manna — The Biblical Symbol of ‘Enough’

How do we trust God will provide?

Does enough exist?  Is there ever enough time, money, sleep, love, faith, justice, energy or peace for us? Why does it feel like we are always lacking in these and other areas of our lives? 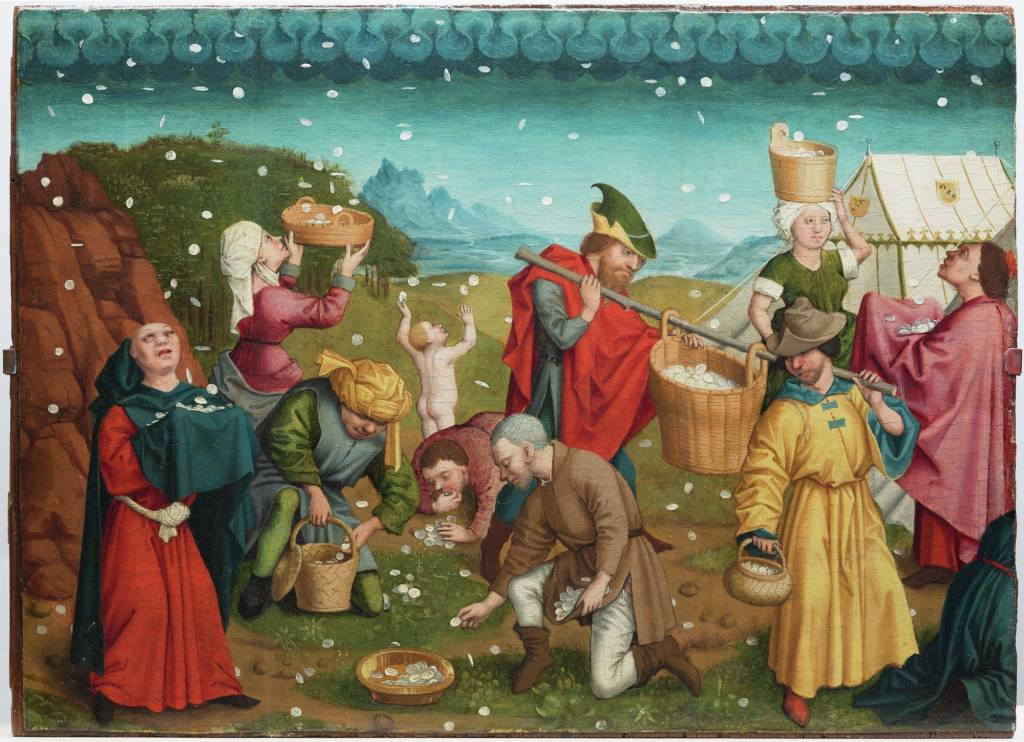 While reading Ellen Davis’s Getting Involved With God, I was struck by a passage in the chapter “Greed and Prophecy: Numbers 11.”

…Israel already had plenty; God “sent them food enough.”  Manna is the great biblical symbol for sufficiency. “The grain of heaven” fell nightly for forty years in the wilderness, specifically to win Israel’s trust in God and to teach them the discipline of sufficiency.  In the morning each household would gather what it needed for that day and no more, for manna had no shelf life.  Anyone who took more than they could use in a day ended with a mess of maggots…Being content with what is enough is not just a matter of getting by, a strategy for survival in lean times until a better alternative presents itself.  Rather, sufficiency is one of the chief arts of the spiritual life.” (Davis, 204-05).

Numbers 11 is uncomfortable to read because it introduces us to an angry God. This God doesn’t seem like the loving, forgiving God Jesus was talking about in the New Testament. This God sounds mean and vengeful.  But take a moment and try to view it from God’s side.

The Israelites were complaining yet again, even though God had been faithful to God’s promises. Their whining negated everything God had done for them. God had chosen them, rescued them from Pharaoh’s army, accompanied them throughout the desert, took physical form so they could see the Divine Presence and given them food to eat every day … and none of that meant anything to them because they were hungry and wanted something different to eat.

But the worst of it was when the Israelites said that things were better when they were slaves in Egypt. That was it. God was done. God has had it up to His heavenly eyeballs, so God decided to make a lasting impression. You can read the story, but basically, God says, “You want meat? OK, well here it is, and it will be so plentiful that it will be coming out of your nostrils.”  (I’m not kidding about the nostrils part.)

So what is this story about? What are we to gain from it?

I choose to believe that such stories are warnings to people like me. Any good parent loves the child, but also is willing to discipline that child when she goes astray. Our God is that type of God. God is not a pushover. God is a friend, but in reality, we are not equal to God in any way, even though we think we are and know better.  And when we begin to think that way, I truly believe that God will step in and show us the error in our limited, fully human logic.  If we open our eyes to the many blessings showered down on us, perhaps we can begin to see them and gather them up in baskets … they are just that plentiful.

We have enough.  We have manna. Go get your basket and start gathering it up with me.

Rebecca Lister is an associate professor of music at Lebanon Valley College in Annville, Pennsylvania. Her passion is music and worship in churches.  She is a student in the on-line program of University of Dubuque Theological Seminary and is an Inquirer in the Carlisle Presbytery.