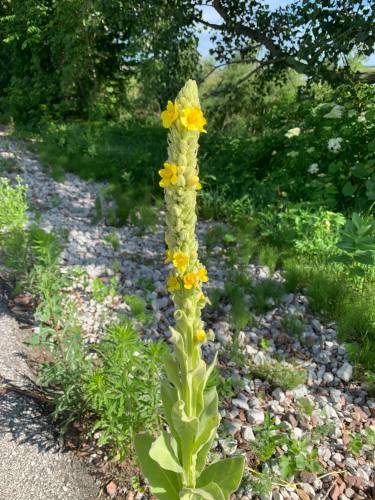 Velvet leaves shaped like elf ears mount up to a thick spike on which small yellow flowers bloom. I take a picture with my phone. It’s a new plant to me, and growing right beside the trail.

Later, I notice others like it on the bank behind our house. The spikes peek above the prairie grass like pale green periscopes, four, five, even six feet in height.

After a bit of research, I found the name of the plant: Common Mullein (MULL-un). Botanists call it Verbascum thapsus. It also answers to Lamb’s Ear, Flannel Leaf, and, with a nod to Numbers 17, Aaron’s Rod.

Mullein grows in a two-year cycle. The first year it puts out a circle of leaves, low and wide. The second year it goes vertical with leaves unfolding from a central stem, and then the topper, the tall stalk covered with buds that open into five-petal flowers, just a few at a time, and each for only one day. After this second season, the plant dies, but not before shaking loose a couple hundred thousand seeds. Fascinating.

Now I know another prairie plant by name. Tall grass prairie used to cover the land around here. What with agriculture and asphalt, very little is left.

Prairie reconstruction projects are underway in a few places. The County Conservation Board has that vision for the old railroad right of way along the trail, steering it back toward prairie.

To eyes accustomed to neatly trimmed lawns, it looks like a weed patch. But I am coming to appreciate the variety of plants and the mix of colors. Just now, the white of Queen Ann’s lace balances the yellow petals of Black-eyed Susans and the lavender star bursts of Bee Balm.

Restorers of the prairie favor native plants, ones that earn the coveted “N” in the USDA plant database. To my surprise, that agency gave my new friend mullein a scarlet “I” for “Introduced.” It had come here from somewhere else.

Europe, North Africa, and Asia are mullein’s ancestral range, so some might say it doesn’t belong in our little slice of recovering prairie. I hope it will be allowed to stay.

The ancestors of these mullein plants put down roots in colonial Virginia in the 1700s. That’s more than a hundred years before my namesake forebearers came to America. From that standpoint, they have a stronger claim to belong here than I have.

And people brought mullein with them because they found value in it. The flowers, roots, and leaves were believed to have medicinal properties. They were used to clear congested chests, take the itch out of bug bites, and treat aching knees. The soft, velvety leaves even came in handy when the Charmin was in short supply.

But even if mullein hadn’t been here longer than I have, even if it weren’t useful in multiple ways, I would still be sad to see it pulled up. Those hopeful yellow flowers make me smile.

Ken Rummer, a retired presbyterian pastor, writes about life and faith from the middle of Iowa by the High Trestle Trail. His previous posts are available at http://presbyterian mission.org/today/author/krummer